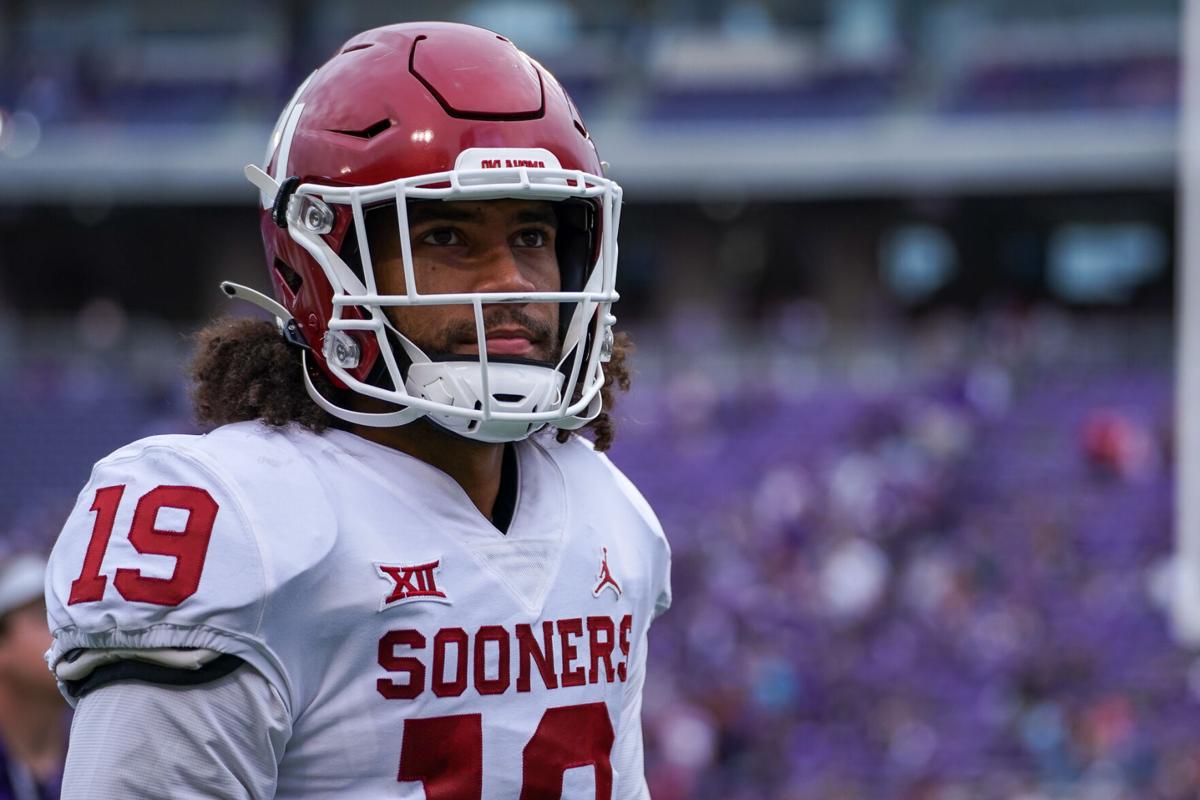 Redshirt senior linebacker Caleb Kelly after the game against Kansas State in Manhattan on Oct. 2. 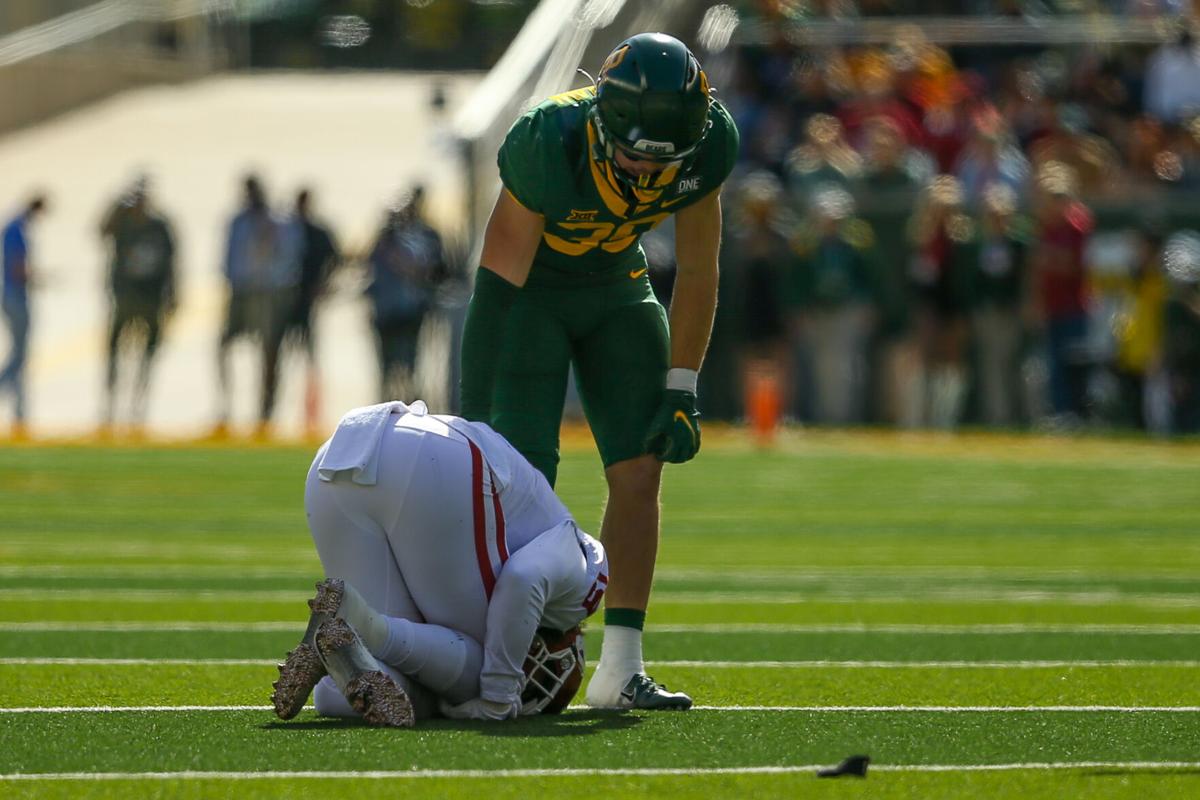 A Baylor player consoles redshirt senior linebacker Caleb Kelly after Kelly was injured on an OU punt during the game against No. 13 Baylor in Waco on Nov. 13. 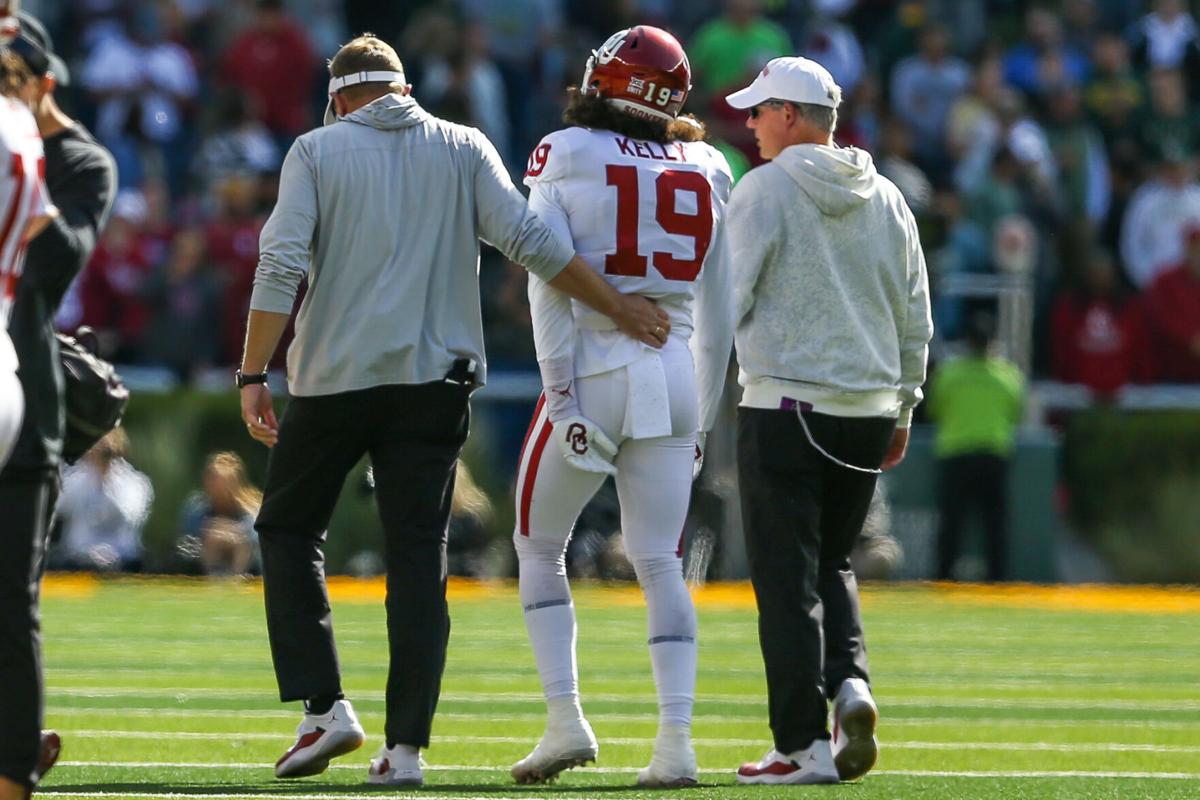 Redshirt senior linebacker Caleb Kelly walks off the field after being injured on an OU punt during the game against No. 13 Baylor in Waco on Nov. 13.

Having sacrificed his body for the last time, Caleb Kelly soaked up his final minutes wearing No. 19 as an Oklahoma Sooner.

“Dang, this is the last time I’ll be fully dressed in the OU uniform,” he thought as he stared up at the cheering crowd inside McLane Stadium last Saturday. Since, friends and family have cried about, for and with him, but as usual, the sixth-year senior linebacker has been tough enough to hold his tears.

Kelly tore his ACL for the third consecutive year during the third quarter of the Sooners’ 27-14 upset loss to Baylor, when they rekicked a punt after lining up incorrectly on their first try. After shielding punter Michael Turk, Kelly sprinted downfield, where a defender blocked his path. As he tried to fight through the blocker, he planted his left leg awkwardly. It began wiggling beneath him and popped before the pain took him to the ground.

In 2019 spring practice and 2020 fall camp Kelly suffered the same injury. This time, it ended not just his season, but his college career. He announced on Twitter shortly after Saturday’s game that it was his last game at OU. Once, Kelly dreamt of starring for three years and jumping to the NFL like former Sooner Kenneth Murray before he was marred by injuries. That never materialized, but the love and relationships Kelly has developed through perseverance have been supplementarily rewarding.

“That's what I wanted for myself, but God had a different plan,” Kelly, the last remaining player to appear in a game under former coach Bob Stoops, told reporters Tuesday. “I feel like everything, all the different guys that I've gotten to affect because I've been here so long and all the different things I've done has really set me up for my future academically. And I just think all the opportunities that have come through that is something that I do not regret at all and I'm very happy for and so I'm appreciative of everything that's happened.”

Fans watching from home never saw Kelly collapse, because the broadcast cut to a commercial break. He lay on the turf, out of sorts and yelling in anguish, as fellow sixth-year senior Bryan Mead prayed over him. While repeatedly asking Kelly if he could hear him, Mead’s sweat dripped onto Kelly’s face, pulling him from his daze.

Kelly’s knee had hurt that badly before but he’d never felt it stiffen that quickly and he couldn’t even straighten it on his own. Eventually, he was helped to the sideline. He’d gotten a stinger in his shoulder earlier in the game and some teammates didn’t realize he’d hurt his knee, but athletic trainer Chris Watson later confirmed the worst.

“It’s horrible, man, but honestly, it's probably been made easier by his willingness to just accept it and just bounce right along,” OU head coach Lincoln Riley said Tuesday. “He's been out at practice with a smile on his face, been around the guys with the same energy. It hasn't really changed him.”

The curly haired former five-star prospect from Clovis West High School in Fresno, California, has delivered countless impact plays during his time in Norman. Kelly made his first start seven games into his freshman season and later emerged with a team-high 12 tackles in the 2017 Sugar Bowl.

Kelly also registered a scoop-and-score in the 2017 Big 12 Championship Game and a 2018 win against West Virginia. Earlier this season, he made a crucial fourth-quarter strip and fumble recovery that helped OU beat Texas in the Oct. 10 Red River Showdown.

However when he looks back now, Kelly remembers the faces of his teammates more vividly than his best performances. He has a special relationship with Mead — they've been workout partners most of their careers and were roommates freshman year after both moved in late — and will be in his wedding when he marries OU softball player Grace Green.

“I've played with so many different guys that I've been able to be around and call my brothers and help them when they've been down, and they've helped me when I've been down,” Kelly said. “What a blessing that those dudes have told me they love me, and they mean it. And those dudes are calling me and checking on me and everything as soon as they hear, and everybody's all devastated and everything. I've seen more people cry than I have about me being hurt.”

Returning for a sixth year and moving to outside linebacker, where he backed up All-American Nik Bonitto, eased Kelly’s mind, opposed to previous seasons, when he was expected to be a defensive star. He said shouldering less pressure helped him play freely, maximizing every opportunity on defense and special teams.

“He's a pure leader and it shows,” said redshirt sophomore defensive back Woodi Washington. “He got injured, and I hate that for him, but I know he's still gonna be with the team, he's still gonna try to coach these guys up.”

The love Kelly shares with his teammates and coaches was somewhat constrained during the 2020 season, when he was separated from the pack due to COVID-19 and his knee rehab. He got it back in full, though, this season when he was named a team captain.

“It was a lot more responsibility than I might have wanted to be honest,” Kelly said. “It’s a lot of guys you gotta worry about … but it was something that I really have enjoyed. I really do care about these guys, and I always have, but when you have that title, you kind of get that open door from everybody to where when you get to when you are talking to them, they're listening, and they really care what you have to say, and it's not going in one ear and out the other, and it's just been a really cool experience.”

There’s few players who epitomize what it means to be an Oklahoma Sooner better than the gritty, indomitable Kelly. His first piece of parting advice for future OU players is to understand what a Sooner actually is. His second admonition is for them to know their role.

“The Oklahoma Sooner name, the brand, everything that comes with it is already established, so you're not going to change this university,” Kelly said. “You need to come in and add to it as best as you can. And that's just the mindset of an Oklahoma Sooner. I'm going to come here and give as much as I can get out, and whatever you give is what you get. You come in and you give everything, you give your work ethic, your body, your mind to this game and to this university, you can get out.

“Being an Oklahoma Sooner, really, for me is just going through anything without giving in. It’s just that adversity and perseverance. This is Midwest, kind of South, where you get to really be friendly and love people, but when you get to go on the field, your goal is to smash somebody and really dominate a game. It's not to just come in and even just win, it’s to come in and dominate and dominate in everything you do, especially when you have that Sooners on your chest.”

Kelly will have surgery next week to repair his injury. Before that, he’d planned to train in Tampa, Florida, following the season to prepare for the NFL draft. He hasn’t closed the door entirely on trying to reach the professional ranks, but will have to wait until 2023. Until then, Kelly’s hoping he can obtain an additional scholarship to stay at OU or remain with the Sooners in a graduate assistant or recruiting role.

If staying connected with football isn’t an option, Kelly says he’s received plenty of other job opportunities. After all, he is graduating with a second master’s degree in business administration and management in December. He also boasts a master’s degree in organizational leadership.

On Saturday, Kelly will get a proper sendoff before Oklahoma’s game against Iowa State. After petitioning his former coach via social media Monday, he’ll join Stoops, now an analyst for Fox College Football, on the network’s Big Noon Kickoff pregame show.

Kelly will be on national television live from the north side of Gaylord Family-Oklahoma Memorial Stadium before presumably participating in Senior Day festivities. It’ll be a fitting farewell for the man who’s given his family, teammates and university everything he has.

“I think for him, it's just a recognition that it's kind of time for the next chapter in his life and he's not sitting there and dwelling on it or (saying) ‘poor me,’” Riley said. “He’s a great example to a lot of people, because a lot of people wouldn't handle it that well. He's been great, and that's why whatever he chooses to do next, he's going to be pretty darn good at it.”

Mason Young is the OU Daily's sports editor and covers OU football. He was previously assistant sports editor and has covered women's gym, wrestling and former Sooners in the NFL. Email Mason at masyoung@ou.edu and follow him on Twitter @Mason_Young_0