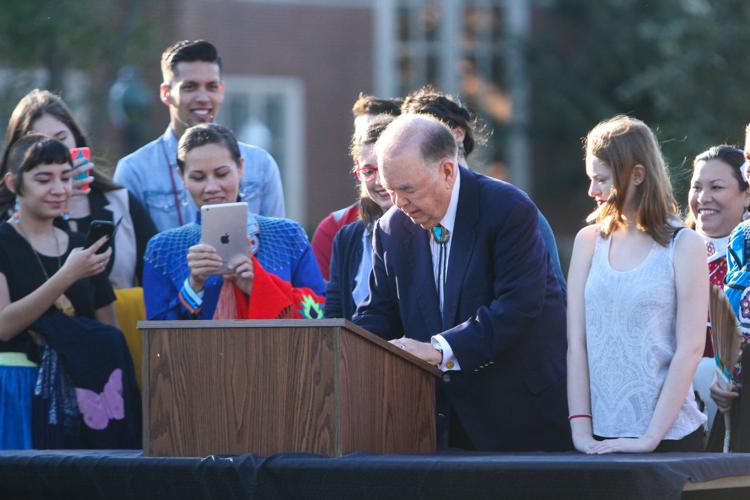 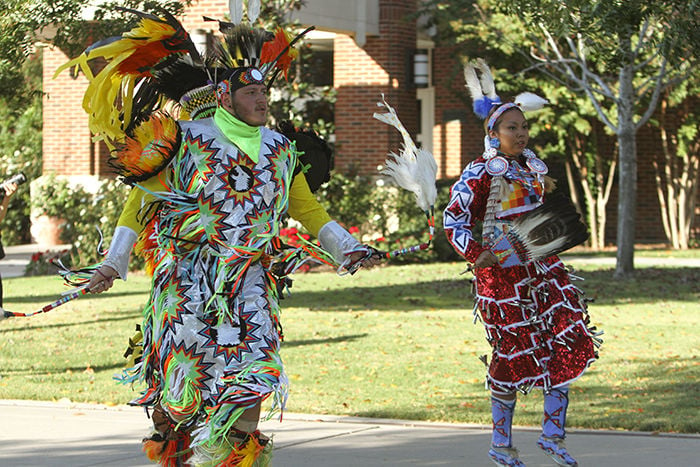 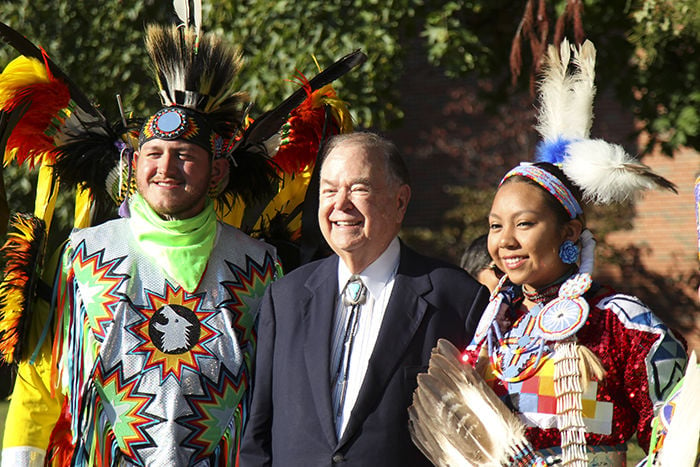 OU President David Boren (centered) takes a photo with local tribal dancers during the celebration of Indigenous Peoples' Day in the South Oval Oct. 12. Celebrations for the holiday will continue throughout the day.

OU President David Boren (centered) takes a photo with local tribal dancers during the celebration of Indigenous Peoples' Day in the South Oval Oct. 12. Celebrations for the holiday will continue throughout the day.

Indigenous Peoples’ Day is now an official holiday at OU.

At 9 a.m. this morning, OU President David Boren and Student Government Association President Alex Byron signed a proposal to confirm the second Monday of October as the official Indigenous Peoples’ Day on campus.

“Today marks a new beginning,” Boren said during a speech after the signing.

Boren said that today, the first official celebration of Indigenous Peoples’ Day, the university will honor the fact that Native American culture has “not only survived, but continues to flourish.”

“We have so many things to thank Native peoples for,” Boren said.

The proposal signing took place outside at the Unity Garden on OU’s South Oval. Byron welcomed the crowd of observers and the local tribal members before continuing with the ceremony. Afterwards, Byron and Boren posed for photos with various Native American students and tribal leaders.

“We’re really excited about today,” Byron said. “The turnout was great, and we’re really looking forward to the rest of the day’s events.”

“Everyone's been super supportive and excited. Even now you can see that people are fascinated by this,” Byron said, referencing all the frozen students staring at the dancing procession continuing down the South Oval.

Following the proposal passing, the procession made its way down the South Oval towards the Bizzell Library, where a podium awaited. Corey Still and Sara Cornell, two Native American activists, spoke, and then Boren made a speech to officially recognize the new holiday.

Boren acknowledged the effort of all the OU students who pushed for Indigenous Peoples’ Day, saying how proud he was that the holiday originated with the students. He then discussed further efforts that OU will be making to be more inclusive of Native American culture. The university will establish more cultural classes, a new center for tribal nations and has just named Mark Wilson as the new OU tribal liaison.

“It’s a historic event, the fact that President Boren has decided to change the campus-wide title of this day from Columbus Day to Indigenous Peoples’ Day,” first-year law student Olivia Glazner said. “It’s cool that all these people from almost every tribe in Oklahoma traveled here as well. Having them on the campus is huge. It’s huge that they can be this physical presence on campus, especially since this a state that is made up of so much Native land.”

Celebrations will proceed throughout the day, including art showcases, Native American history seminars and dancing.

Events for the Day

- Talk will be in Law Classroom 1

- Dr. Robertson will speak about the history of Indian law in the United   States and how colonization influenced that.

- Must RSVP for lunch

6:00 pm – Catered BBQ dinner at the Jacobson House Native Art Center. BBQ provided by the American Indian Fellowship organization and the Jacobson Foundation. The public is asked to please bring a side dish or a dessert. Please bring your chairs and dress accordingly for fall weather.

Film Screening: Foreigners in Their Own Land

Anna Mayer is an economics junior and news editor at The Daily.