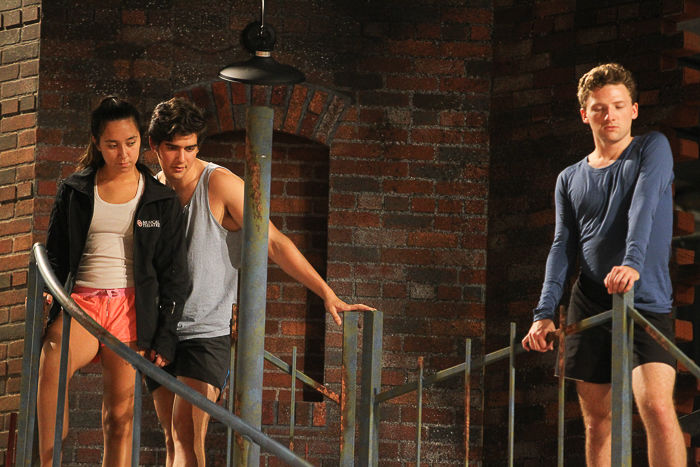 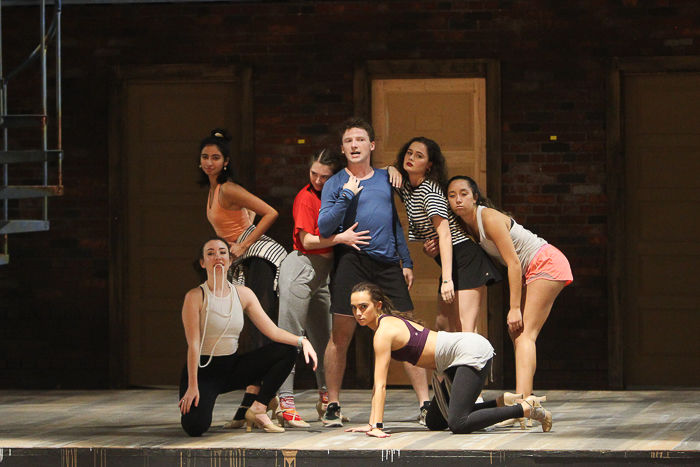 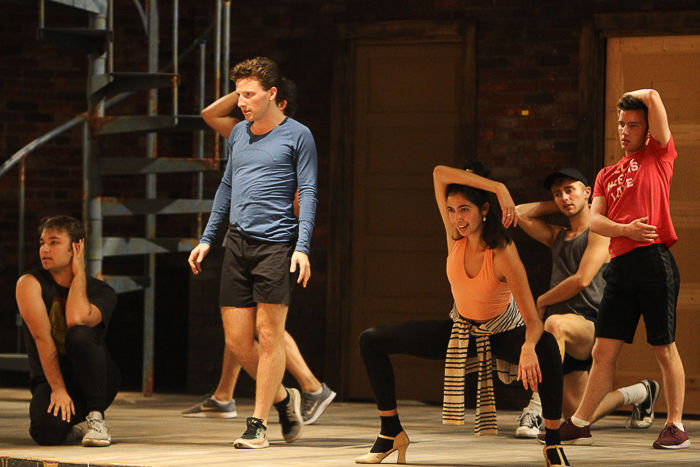 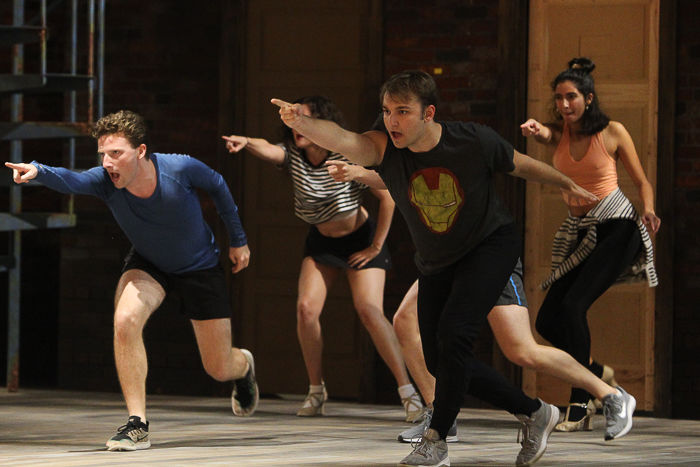 Sporadic singing erupts from different corners of the Elsie C. Brackett theater as director and choreographer Lyn Cramer prepares for a long night of rehearsal of the production “Cabaret,” University Theatre’s newest show.

OU’s musical theater department has prepared for the production of the musical classic over the last six weeks. As the opening night of Oct. 4 rapidly approaches, Kirsten Myers, a musical theater senior who plays Sally Bowles, said it is difficult to contain her excitement.

“We're so excited to get an audience here. They just give us back the vibrancy we had at the beginning,” Myers said. “We're all very excited to start putting it together and to show people what we've done for the last six weeks.”

The Tony-award winning show first appeared on Broadway and in London in 1966 and is based on the 1951 play by John Van Druten, “I Am a Camera,” which was adapted from one of the short stories in the collection “The Berlin Stories” by Christopher Isherwood.

The OU production is directed by Cramer, a Weitzenhoffer endowed professor in tap, jazz and theater dance styles, with musical direction from Paul Christman, professor of musical theater.

The show welcomes audiences to the infamous Kit Kat Klub, where everyone can leave their troubles at the door. As the pre-World War II Germany grows more and more uncertain, however, the allure of Berlin nightlife might not be enough to survive dangerous times, according to the University Theatre website.

“It's very interesting how incredibly layered this show is. It is absolutely, without a doubt, the most political show I have ever done, and that is in the forefront of its message. It's just channeled through many characters and many stories,” Cramer said. “We are still telling a story, but the political message is simply, 'Watch out. Watch out, it's going to happen again. Don't let it.'”

Cramer’s background with “Cabaret” is extensive — going back almost five decades. Along with playing the main character, Sally, when she was a senior in high school in the ‘70s and a Kit Kat Klub girl in the ‘80s, Cramer also directed the show in 2003 at OU and in 2006 at the Lyric Theater in OKC, making this the fifth time she has been involved in “Cabaret”.

“When the movie ‘Cabaret’ came out, I was a sophomore in high school. My mother had to take me because it was rated R, but she was a stage mom, so she got it,” Cramer said. “I was a Liza Minnelli fanatic and that movie influenced me in the way I loved the musical.”

Her experience with “Cabaret” made it an easy candidate for OU’s fall musical, but Cramer chose it with the interest of her students in mind, she said.

“Normally, I direct dance shows because I'm the dance person. So whenever I get to step out and do something else, like ‘Cabaret,’  it's growth for me,” Cramer said. “When I get to do that and help influence the actual education of our students at the same time, it's a win-win.”

With a show of this magnitude, actors and actresses within OU’s musical theater department were required to put in a lot of work as they prepared for auditions. Myers said she devoted countless hours of her summer in preparation for the production.

“I had to do lots of period research,” Myers said. “I ended up watching the movie, ‘I Am a Camera,’ I looked up the person who originally inspired Sally Bowles, and I read 'The Berlin Stories' by Christopher Isherwood, taking what I could from the book about his real life experiences with his Sally Bowles.”

The actual audition process occurred over the course of three nights. Night one was devoted to singing a piece from a period close to the show, the second night was a dance call, and the third was callbacks.

Taylor Ratliff, musical theater junior, was cast in the role of Emcee, the master of ceremonies at the cabaret. The Emcee personifies the internal monologues of other characters while offering commentary on the events occurring around him. He serves as a link between the audience and the actors, introducing them to the world of cabaret in the opening number, "Willkommen."

“The Emcee is not necessarily someone who is real — he's very ethereal. Lyn and I talked a lot in rehearsals about how in the game of cabaret, the Emcee is the dealer of the chips, or the holder of the cards or the puppeteer,” Ratliff said. “He, in some senses, is the most human character in the show, because he reacts to what is happening and in a certain sense, loses all control, while other characters decide to take things into their own hands.”

For both Myers and Ratliff, comprehending the complexities of their characters took time and reflection. Cramer, however, did a wonderful job of guiding them and the remainder of their cast in their journey to fully embody their characters, they said.

“My directing style is like a teaching style. When I direct people, I give everyone a reason,” Cramer said. “It's like explaining a dance step. There's a reason it's happening, there is a reason behind it, and if you don't agree with me, then let's talk about it so we understand what the motivation is for this particular movement or line.”

Rehearsals consisted of studying and singing through the music with Christman, working with Nicholas Bartell, a dialect coach and OU alumnus, and running through the show an innumerable amount of times, Cramer said. She laid the framework but, as the process continued, she allowed students more creative control.

“It's like when you color in a coloring book, before you color it in, you outline it,” Cramer said. “That's what I tell them — ‘I need to give you the thrust of what's going on, outline it, and then you need to fill in all the gaps.’”

Cramer said she found immense success with her students through the creative process of the production, and her students are appreciative of all the effort she put into the show.

“Cramer is a force to be reckoned with,” Myers said. “She's very good at seeing the small things that make a scene, and she's so specific when she gives notes to us that it's very easy to just translate them and do them. It always turns out so raw and satisfying for everybody on stage.”

Ratliff said the cast and crew in the production are a “show family.”

“It's so odd because we grow so close to people so immediately. We just latch on to each other since we share such a large chunk of time together,” Ratliff said. “We've really grown close in this show. It's such an important show that we've all kind of bonded over what it means to tell this story.”

The importance of this show, ultimately, lies in its themes, as they go far beyond the theatrical world of the cabaret. Having a message that is very political in nature, Ratliff said, makes the story one of extreme relevance in the world today.

“Since this summer, I have been thinking about the anti-Semitic graffiti at the elementary school in Norman last semester. Near the time it happened, we announced that we were doing ‘Cabaret,’” Ratliff said. “When the world is trying to retaliate against the artists who tell the story, we are choosing to go all in and tell a story that is palpable in a new way today.”

Cramer said the show can be summed up in one line: "If you could only see her through my eyes."

“Cabaret,” although a show based on history, serves as a warning to its present audience. It sheds light not only on the persecution of the Jews, but also on the ways in which people are subject to persecution in their own way today.

Only through the art of genuine expression can the complex message behind “Cabaret” truly be communicated. The clear and effective delivery of the show’s theme is Cramer’s ultimate goal, she said.

“I always want our audiences to leave thinking, 'Wow, OU musical theater program — this is one of the best there is,'” Cramer said. “(We) want our students to get accolades, but the show has to move people. ... I think that's why we're all in the theater — we want to tell stories.”

All performances will be held in the Elsie C. Brackett Theatre in Norman, at 563 Elm Ave.