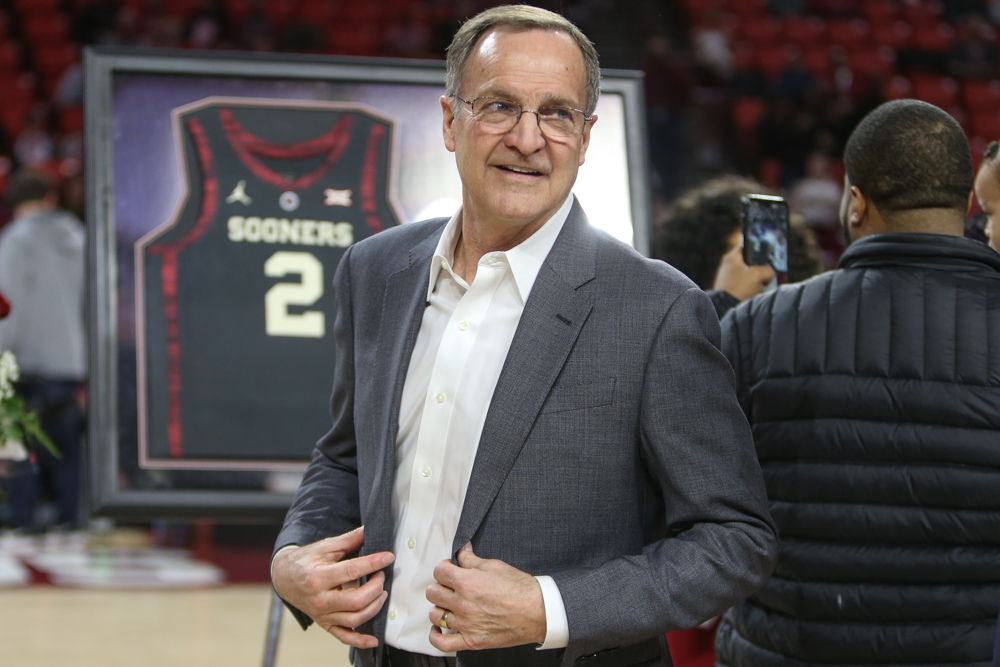 OU coach Lon Kruger waits for the senior day ceremony before a game against West Virginia on March 2, 2019. 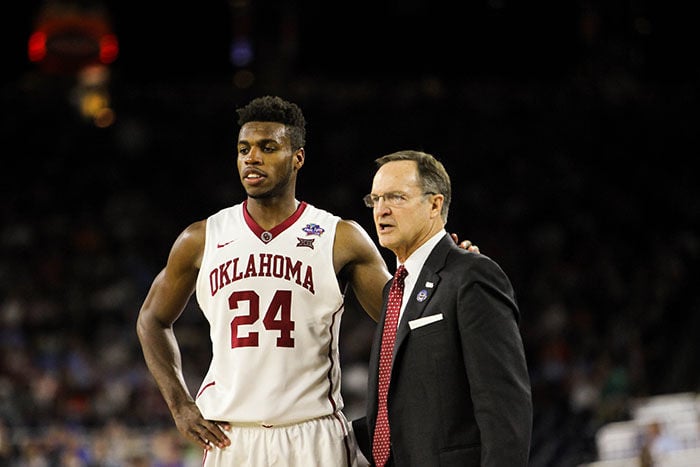 HOUSTON — Then-senior guard Buddy Hield and head basketball coach Lon Kruger speak during a free throw during a game against Villanova on April 2, 2016. The Sooners lost the game 95-51. 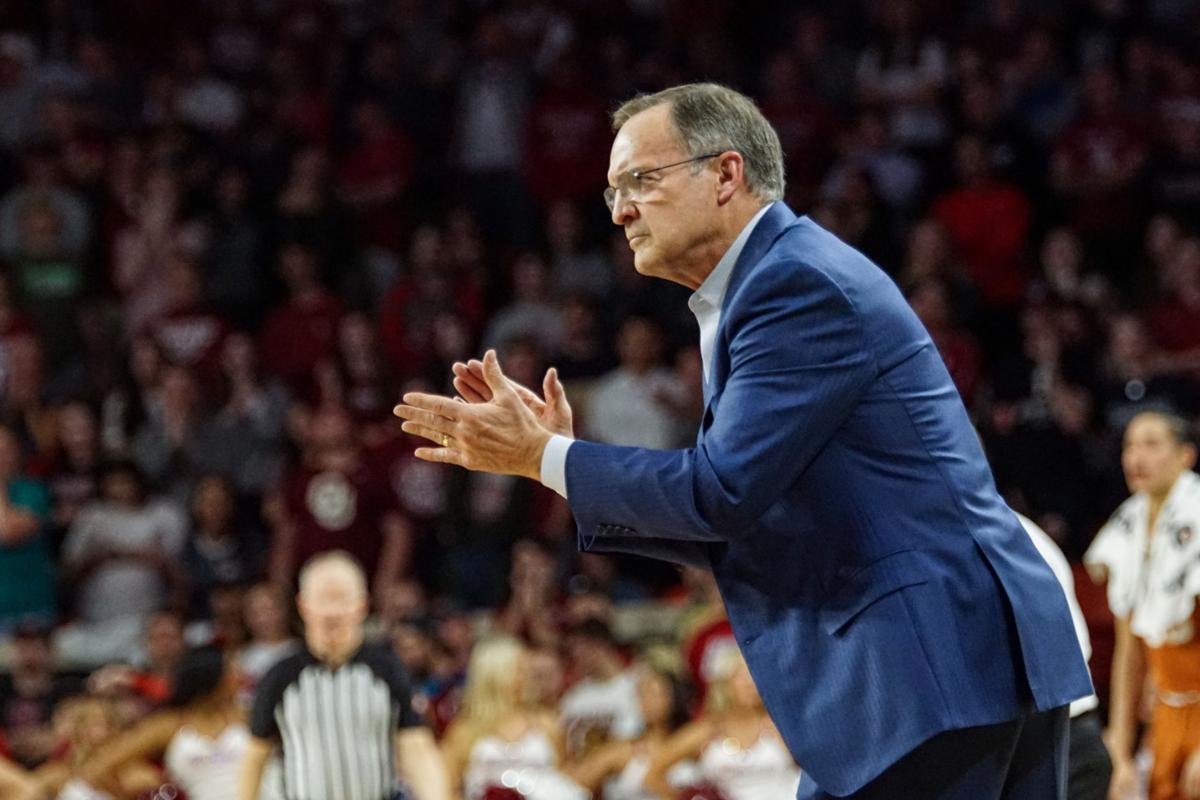 Head coach Lon Kruger claps during a game against Texas on March 3, 2020. 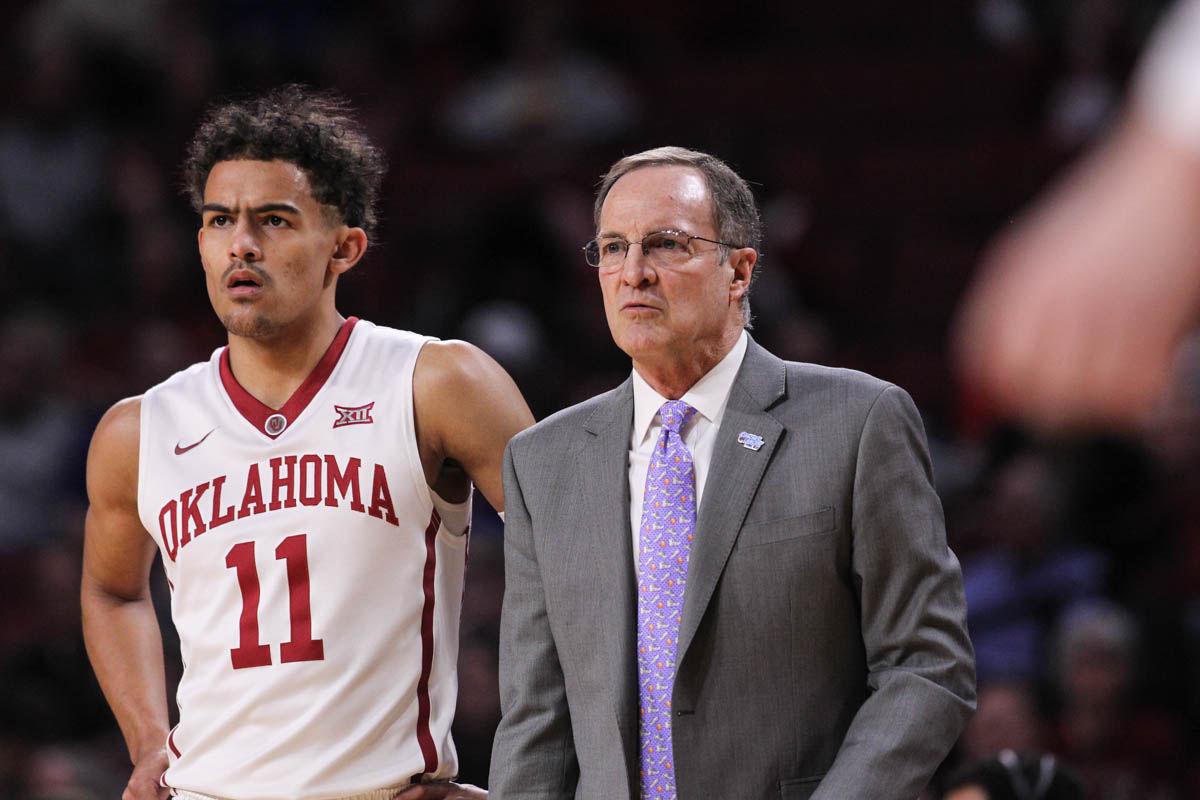 OU coach Lon Kruger waits for the senior day ceremony before a game against West Virginia on March 2, 2019.

HOUSTON — Then-senior guard Buddy Hield and head basketball coach Lon Kruger speak during a free throw during a game against Villanova on April 2, 2016. The Sooners lost the game 95-51.

Head coach Lon Kruger claps during a game against Texas on March 3, 2020.

Lon Kruger knew Oklahoma would be the final stop of his coaching career.

In 2011, Kruger was coming off his fifth consecutive season with 20 or more wins at UNLV — the fifth school he left in a better position than he found it. Pleased with his present position, he twice denied athletics director Joe Castiglione’s offer to come to Norman.

Castiglione needed a coach to return the Sooners to basketball prominence after the firing of Jeff Capel and a finding that put OU on probation for three years due to recruiting violations. In the two seasons before his arrival, OU had gone 27-36. Kruger, known for rebuilding basketball programs and for his positivity on and off the court, was uniquely qualified for the job and what it would require. Castiglione was determined to get him.

Fast forward through 10 years, seven NCAA Tournament appearances and a Final Four, and Kruger — who retired March 25 — ultimately delivered for OU. Back then, the opportunity for Kruger and his wife, Barb, both Kansas natives, to return to the Midwest was too much to pass up when he finally took Castiglione’s offer. Kruger’s return to the region gave him an opportunity to recruit the players to compete for one last Final Four, which he did during the 2015-16 season.

“He's made us feel like he was never anywhere else,” OU President Joseph Harroz said Friday. “And he's made us better. And I'm honored to know Lon as a friend (and) as a person.”

Now, after 45 years of coaching, Kruger, who’d been rumored to be contemplating retirement for the past few years, has walked away from the game he navigated like few others. Kruger said after former OU assistant Lew Hill’s death Feb. 7, he started to think more seriously about hanging it up. Oklahoma’s season ended Monday, news broke Thursday and Friday morning the Sooners held a Zoom press conference — eight days after seeing women’s coach Sherri Coale also retire — where Kruger, accompanied by Castiglione and Harroz, discussed his decision.

Kruger’s contract, worth over $3 million, runs through June 2024, making him the athletic department’s highest paid figure besides football coach Lincoln Riley. Next, he’ll return to Las Vegas to spend more time around his grandkids after his son, Kevin, was promoted to head coach at UNLV on Sunday, March 21.

“Once his son took the job he took, I was dreading the phone call from (Castiglione),” Harroz said. “That indicated that Coach Kruger was going to be retiring and then (Kruger) called me and I felt like not taking the phone call, but decided I probably should.”

Kruger is among college basketball’s elite in many eyes not just for what he did, but how he did it. He goes out with a 674-432 career record, including a 195-128 mark at OU, the fourth-best in program history. He was the first coach to take five different teams to the NCAA Tournament and the only coach to win a tournament game with all five. He’s also the only person to take four teams to the Sweet 16 or beyond since the NCAA Tournament expanded to 64 teams in 1985. His teams made 20 combined tournaments in his 35 years as a college head coach.

After playing point guard at Kansas State from 1971-74, Kruger entered coaching as an assistant at Pittsburg State and subsequently returned to Kansas State. He became head coach at Texas Pan American, now Texas Rio Grande Valley, in 1982 before a head coaching return to Kansas State and then stops at Florida, Illinois and the NBA’s Atlanta Hawks. Following one season as a New York Knicks assistant, he returned to the college ranks where he resurrected UNLV before jumping to OU.

Before Kruger’s first season at each of the six colleges he coached, the teams had a .441 combined winning percentage. In Kruger’s second year at the helm, his winning percentage was .606 combined, and rose to .697 in his third season. Kruger’s ability to rebuild programs was a key ingredient Castiglione sought in his coaching search.

“Create a culture in which players love being around,” said Kruger of the dynamic he helped sustain at the Lloyd Noble Center. “If they're in the office a lot, if they're coming by practice early, if they're staying late, if they want to be around us, then we've got a better chance to teach, to listen and to learn from them. And they've got a better chance then to realize their potential and do as well as they possibly can. And that's not just on the court, but also socially and in the classroom and in every other way.”

After arriving in Norman in 2011, he mentored two star guards in 2016 National Player of the Year Buddy Hield and 2018 National Freshman of the Year Trae Young, who became top-10 NBA draft picks. Guard Isaiah Cousins and forward Romero Osby were also drafted after playing for Kruger.

A True Class Act, A Man of Integrity, Honor, High Character and Respect. A Leader, A Teacher and Difference Maker. It was truly an Honor playing for. Thank u for believing in me and helping become the Man and Player I am today. The Game will truly miss u Coach, Happy Retirement pic.twitter.com/GEivix6jFa

I often think to myself what this duo could’ve done with more years together & get sad because I know it would’ve been special. Hall of Fame Career.💯 Good Luck with Retirement Coach @LonKruger ❤️ pic.twitter.com/ly67v6nrbX

The height of Kruger’s time at OU was that 2015-16 run. The Sooners went 29-8 behind Hield’s 25 points per game before falling to eventual champion Villanova, 95-51, in the Final Four. Kruger also coached Oklahoma’s most attended game of all time when 13,490 packed the Lloyd Noble Center on Feb. 9, 2013, against Kansas.

In his final season at Oklahoma, Kruger coached the Sooners to the NCAA Tournament’s second round before a loss to No. 1 overall seed Gonzaga. He’s a candidate for Naismith Coach of the Year and developed senior guard Austin Reaves, who went from a one-offer high school player to a likely second-round pick in the 2021 NBA Draft.

While resurrecting programs, Kruger was still able to incorporate elements of the past. He connected with players from OU teams before his arrival and also befriended Billy Tubbs, who an emotional Kruger said embodied Sooner basketball on Friday.

“Coach Kruger has been so kind to our family,” Tubbs’ son, Tommy, who played at OU from 1983-85, told The Daily on Friday morning. “He and his family are first class in every way and he will be missed leading our great program. … He and his staff embraced the past of Sooner Basketball and included us every chance that he could.”

Those who know Kruger best have repeatedly expressed the sentiment that he’s a great coach, but a greater person. Among the manifestations of that OU cited was that he never received a technical foul in 44 years of coaching or cursed at his players. He credited such positivity to his parents, Don and Betty.

In fact, Kruger took an emotional pause when speaking about his parents’ impact on his life. Along with their emphasis on respecting others, Kruger said both taught him the importance of teamwork. His tendency to never attribute personal accomplishments to himself — as displayed during his Friday presser and throughout his career — was a reflection of that.

If seniors Brady Manek, Austin Reaves and Alondes Williams exercise their extra year of eligibility due to COVID-19, they’ll do it with a new coach. Freshman guard Trey Phipps entered the transfer portal March 25, the day Kruger let his team know of his decision. Hours after Kruger’s press conference, starting sophomore guard De’Vion Harmon declared for the 2021 NBA Draft. Beyond those moves, OU has incoming freshmen guards in Bijan Cortes and C.J. Noland.

Among the things Kruger said he’ll miss the most are the relationships with the players and coaches he was able to build throughout the years. Hield trusted him enough to even declare before the 2015-16 season the Sooners would reach the Final Four.

“It’s everyone else outside the game that defines who we are,” Castiglione said. “And with Coach Kruger, you can see that every single day, he brought it. And he never brought it in a way that was about him.

“It was always humble.”

Mason Young is a journalism sophomore. He's the Daily's sports editor and covers OU football. He was previously assistant sports editor and has worked as a reporter covering OU women's gym, OU wrestling and former Sooners in the NFL.

Austin Curtright is a journalism sophomore and The Daily's senior sports reporter. He currently covers OU men's basketball and has previously covered OU softball and soccer.