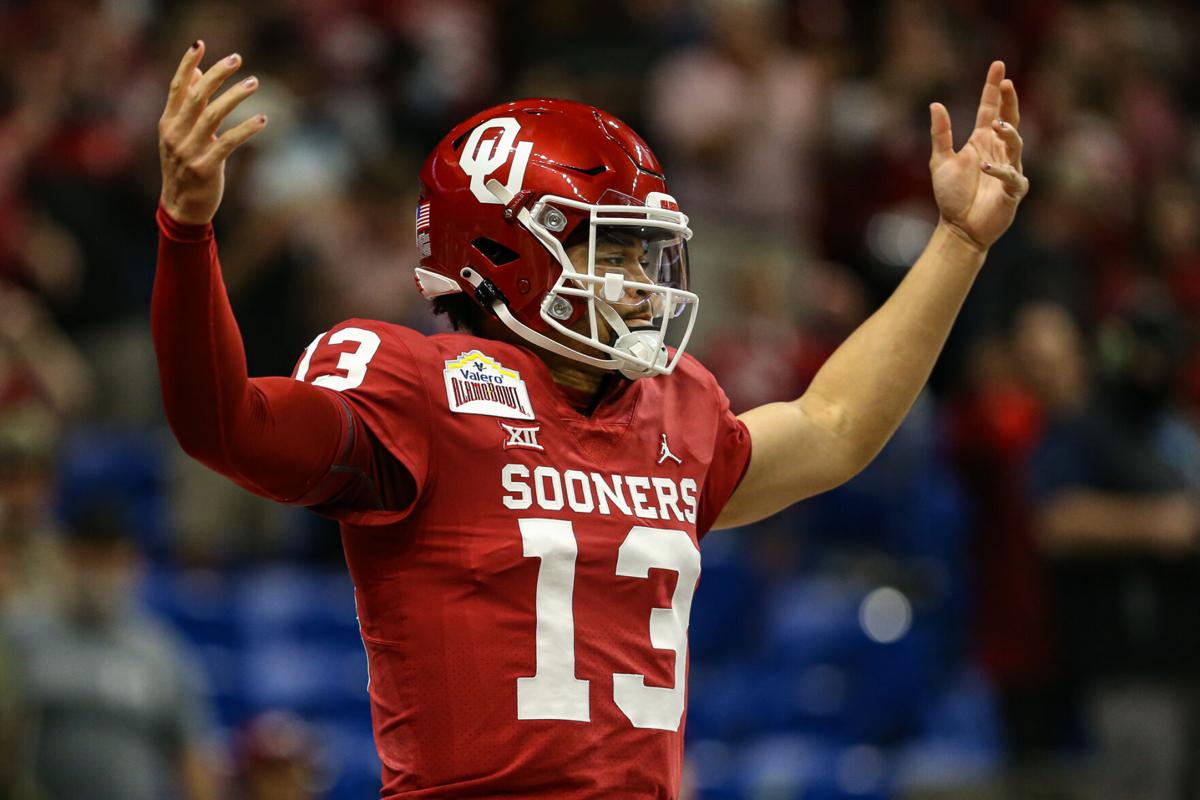 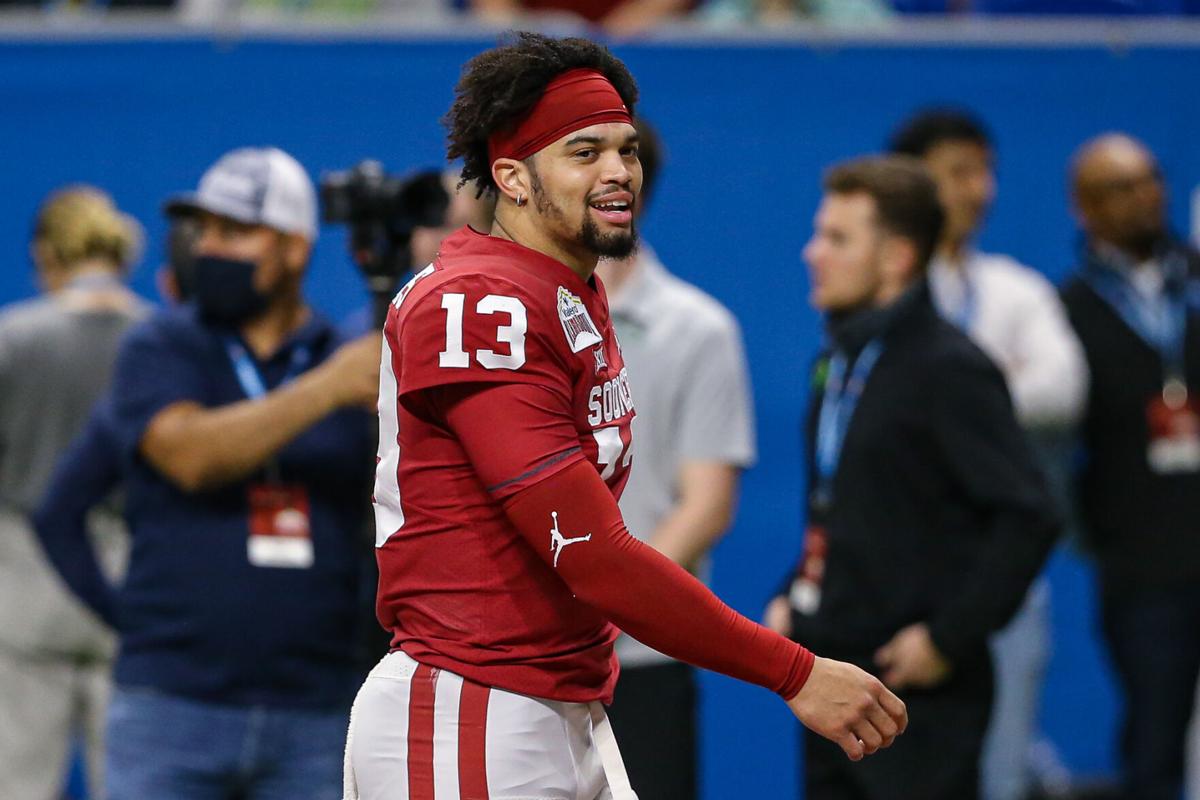 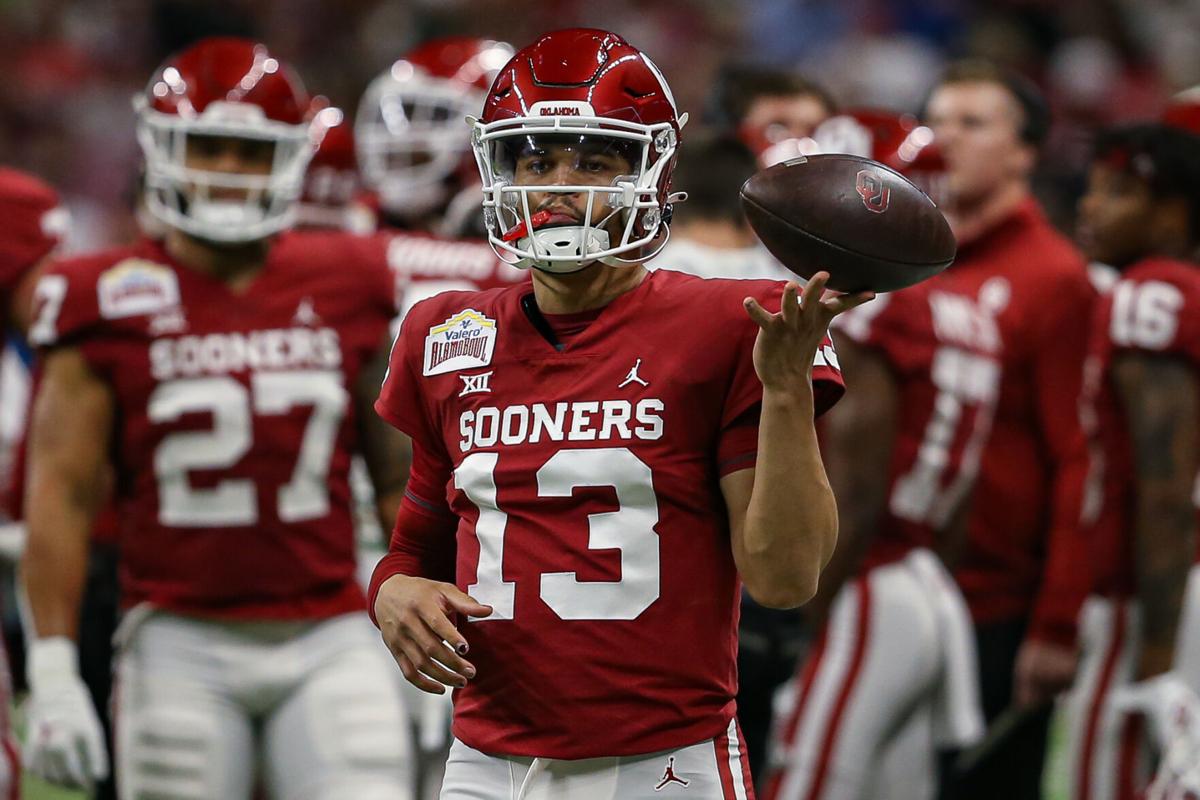 Freshman quarterback Caleb Williams spins the football on his fingertips during the Valero Alamo Bowl against No. 14 Oregon at the Alamodome in San Antonio, Texas, on Dec. 29. 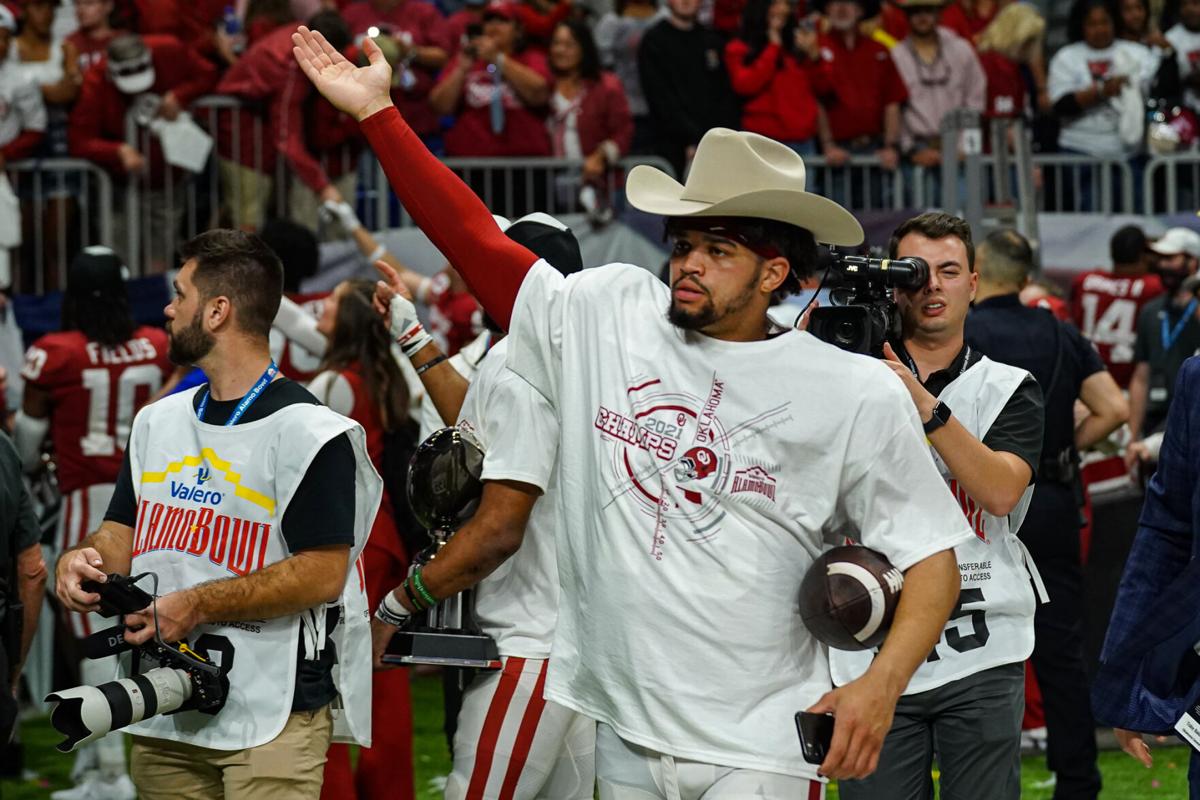 Freshman quarterback Caleb Williams celebrates after defeating No. 14 Oregon in the Valero Alamo Bowl at the Alamodome in San Antonio, Texas, on Dec. 29.

Freshman quarterback Caleb Williams spins the football on his fingertips during the Valero Alamo Bowl against No. 14 Oregon at the Alamodome in San Antonio, Texas, on Dec. 29.

Freshman quarterback Caleb Williams celebrates after defeating No. 14 Oregon in the Valero Alamo Bowl at the Alamodome in San Antonio, Texas, on Dec. 29.

SAN ANTONIO — Moments after Caleb Williams helped lead Oklahoma to its first win in the post Lincoln Riley era, he streaked down the Alamo Bowl’s West sideline. Williams blew kisses to the Sooners faithful while carrying the game ball as they cheered for perhaps the most important piece of the team’s future.

Outside of its reunion with former defensive coordinator Brent Venables, who was hired to replace Riley as head coach on Dec. 5, the scene showcased one of OU’s most positive signs: it provided hope that the freshman phenom quarterback might return for his sophomore season.

However, despite Williams providing 242 yards on 21-of-27 passing with three touchdowns and no turnovers to Sooners fans, he didn’t provide them with clarity about his future as he spoke to reporters for the first time since coming to Norman.

“I’m about to go on vacation with my family,” Williams said, asked if he had made a decision to return next season, while donning a Cowboy hat he picked up after the game, which was used as OU’s rally item despite being a gift to interim head coach Bob Stoops from the Alamo Bowl.

“I haven’t been on a vacation for a really long time and after all of this, ups and downs, I want to go on vacation, spend time with my family, focus on that, and that’s it.”

When Williams found out about Riley’s departure, he was shocked like many of his teammates. But the young quarterback, who possesses a maturity beyond his years, quickly transitioned to providing a leadership presence to his teammates while flipping the focus into preparing for a win.

Williams once said he would walk-on at Oklahoma to play for Riley, although Riley held a commitment from another five-star recruit in Brock Vandagriff, noting the possibility of Williams also rejoining his former coach given his liking of Riley.

Further explaining Williams’ sheer confidence, he compared himself postgame to Tom Brady, who took over for perennial Pro Bowler Drew Bledsoe and won the 2001 Super Bowl with the New England Patriots while never giving up his starting role. Williams’ path was similar, as he backed up Spencer Rattler, the preseason Heisman favorite and clear-cut starter, before leading the Sooners to a 21-point comeback against Texas on Oct. 9.

Williams told redshirt senior defensive back Justin Broiles that if he eventually won the starting job, he wouldn’t give it back. He was right, as Rattler transferred to South Carolina and Williams cemented himself as OU’s destined quarterback.

Now, Venables and offensive coordinator Jeff Lebby must convince Williams to stay and be the face of the team. The task won’t be easy, as Williams has flashed talent that compares to college football’s best. Prior to the Alamo Bowl, Oregon interim head coach Bryan McClendon called the Sooners’ quarterback “probably the best playmaker in the country.”

Nonetheless, Venables is confident in who his quarterback will be in year one at the helm, despite Williams not confirming or denying his status with the team.

“Can’t wait to start working with these guys here again after tonight,” Venables said as OU was awarded its bowl-game trophy at midfield after Stoops invited him to the celebration stage. “Show them what the future looks like, with Caleb Williams leading our offense (and) that damn defense.”

Although Williams acknowledged Venables’ statement, he still mentioned his focus was on ending the semester strong and getting a win for his teammates that didn’t have the opportunity to return next season, unlike himself.

Williams confirmed he and Lebby have talked nearly every day on the phone since the Sooners’ new play caller didn’t make the trip to San Antonio with the team. The Washington, D.C., native also said he felt Venables was “the right guy” for the job and he will see how the program does going forward and how it relates to his decision.

Perhaps his role as starter if he decides to stay will carry over into next season, as Williams retweeted a video of Venables saying “alright, Sooner Nation. can’t wait to see y’all next season.”

Should Williams return as starter in 2022, despite possessing a new head coach, offensive coordinator and perhaps many new offensive faces, he proved that he can be a difference maker in the future of Oklahoma’s program, even without Riley.

Williams after the game tweeted his thanks in regard to Stoops returning to coach the team. But Stoops replied back with “I promise you this is the place to be,” seemingly trying to convince Williams that he should continue his OU career.

It was easy to do because it was the right thing to do! I appreciate all of you guys accepting me. I promise you this is the place to be. @CoachVenables and @Coach_Leb will keep this thing rollin! Keep the hat for an NIL deal!! https://t.co/VAE9lEYaG2

But, as Williams wrapped up his first press conference as Oklahoma’s quarterback, an arbitrary phrase burst off his tongue.

Whether the final quote of the night was a farewell, or a glimpse into the future, it leaves Oklahoma fans with a grueling few weeks until the decision is made after his relaxation in paradise.

Austin Curtright is a journalism junior and The Daily's assistant sports editor. He covers OU football and has previously covered OU men's basketball, softball and soccer.