For months, OU’s highest administrative offices have not responded to new research on sexual misconduct on the Norman campus.

In April 2016, a report detailing the findings of the research — including that 19 percent of 823 OU students surveyed said they had been sexually assaulted — was delivered by researchers from the OU Psychology Clinic to the Office of the President, Title IX and other administrative offices, but the researchers said it had only been acknowledged by the Gender + Equality Center.

OU President David Boren said he never received the report, but that its findings on campus sexual assault were unsurprising.

“I've always felt that the problem is very significant,” Boren said. “That's one of the reasons why I wanted to make sure we had a very strong Title IX program and why I want a hotline — because I'm not surprised. I know we've got a problem and that colleges all across the country have a problem, but it's an understandable problem.”

The survey, conducted over the fall, spring and summer 2015 semesters and distributed via mass mail, found that of the 823 anonymous student respondents, 152 said they had been sexually assaulted. 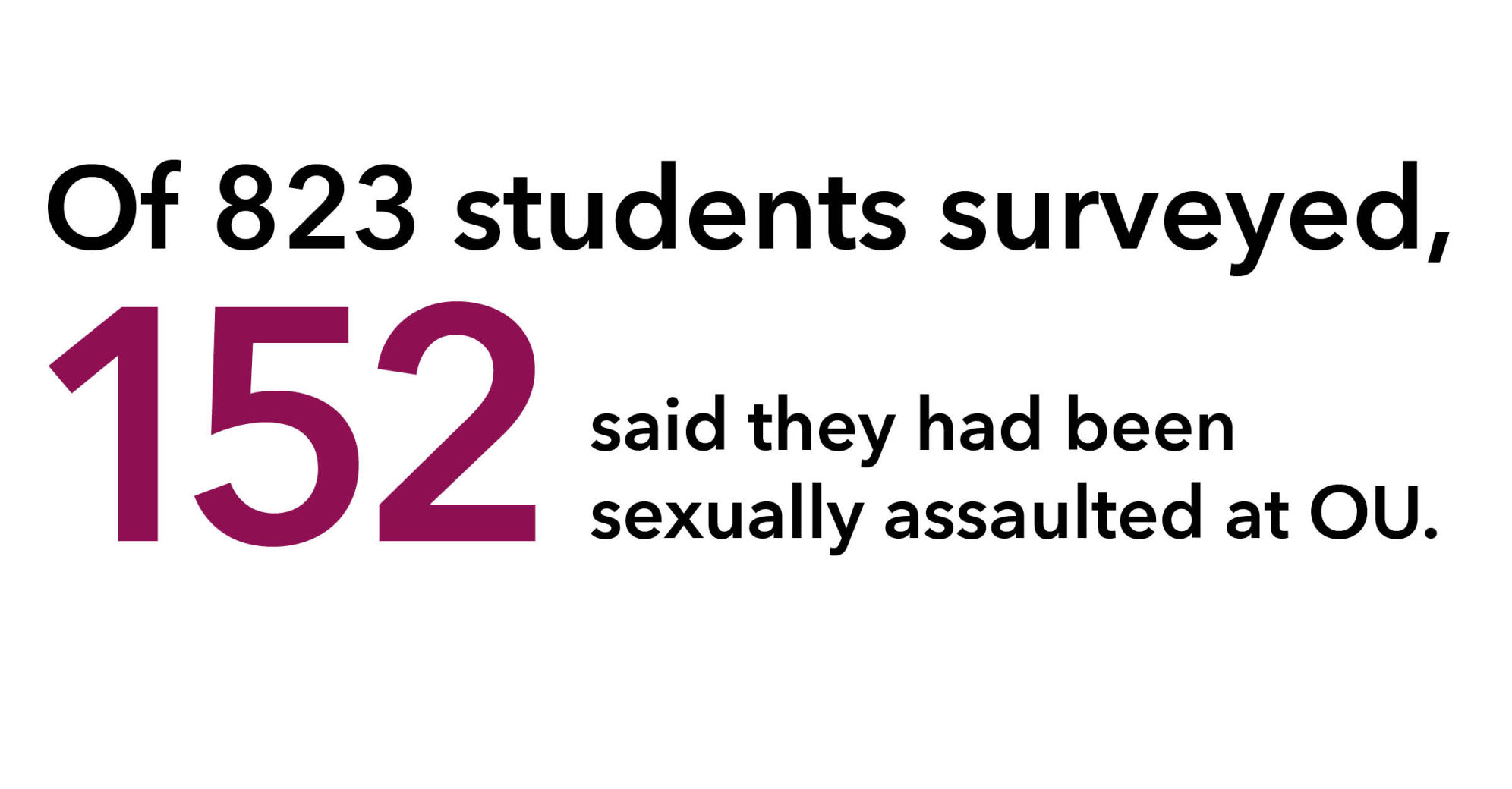 Lisa Frey and Denise Beesley, both professors of counseling psychology at OU, organized a team of doctoral students to conduct the research after being approached by the Institutional Equity and Title IX Office in August 2014 to develop a sexual misconduct climate survey.

“We wanted to make sure that the official university campus climate survey would comply with any federal legislation or regulations,” Smith said in an email. “The researchers decided to move forward with the survey as a research project. We have received and reviewed their findings and recommendations.”

The researchers continued without administrative support — the only difference, Frey said, was that the survey was only distributed on the Norman campus and did not include the Health Science Center and Tulsa campuses in the research.

Still, the researchers are concerned that their report was met with relative silence.

Scott Secor, a third year doctoral student in counseling psychology who was part of the research team that conducted the survey, said even the “Not on OUr Campus” slogan contributes to a culture of keeping campus sexual assault quiet.

“Not on OUr Campus — that has kind of a double meaning to it,” Secor said. “I know the intent behind it is to say, ‘We're not going to let this happen on our campus — this is not tolerated.’ But I think for a lot of people who have survived this, it actually constitutes a denial that (sexual assault) is happening on our campus.”

WHAT THE DATA SAYS 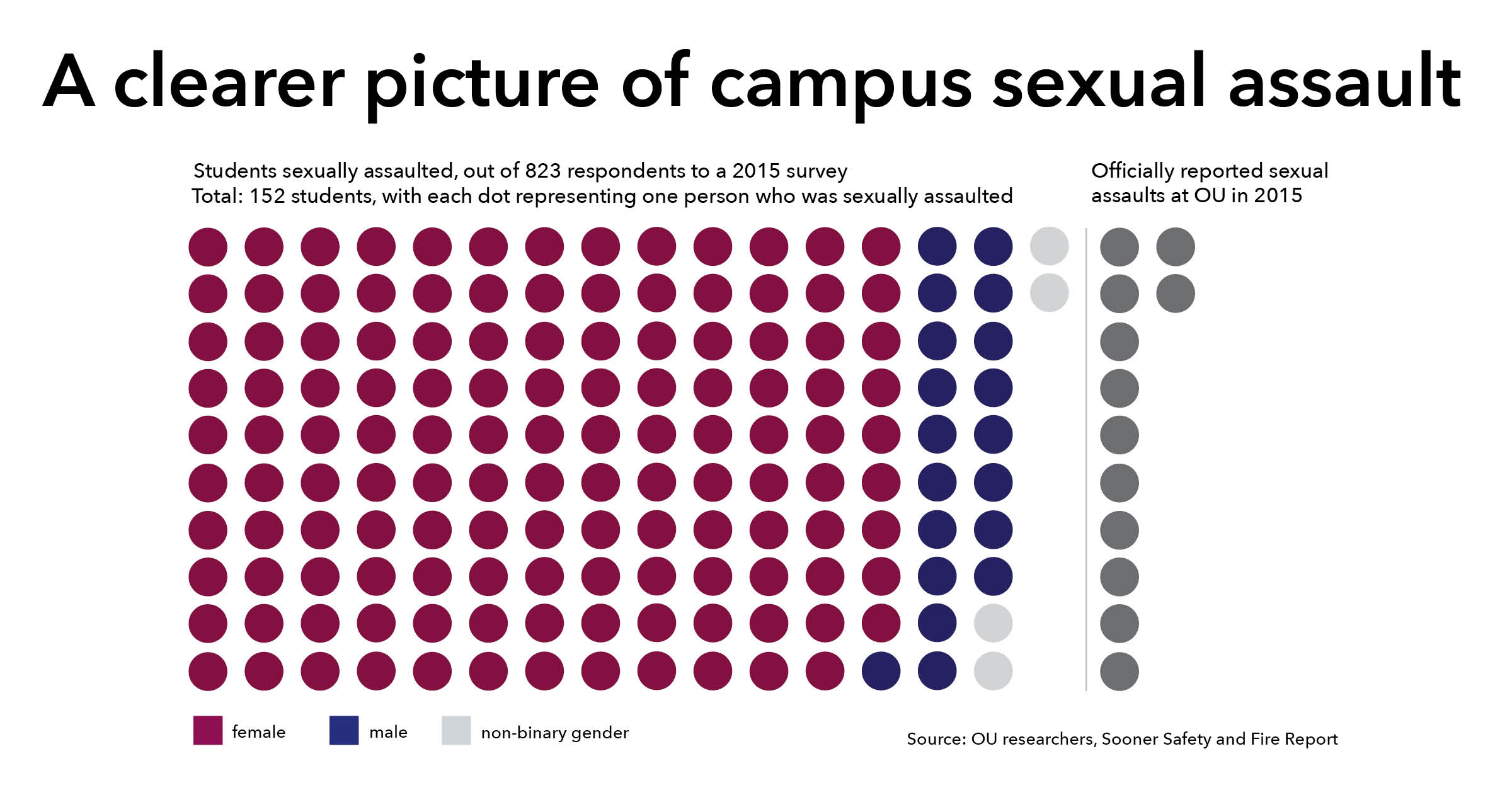 While the statistics show that sexual assault at OU is on par with national statistics — nationally, 1 in 5 women and 1 in 16 men are sexually assaulted in college — students’ narrative responses in the survey indicated that reporting sexual assault introduced additional levels of trauma.

One read: “I have zero trust in the system and zero belief I would be taken seriously.”

Another read: “Reporting was the best and worst decision. The process felt grueling and very isolating.”

And another: “My friend had to drop out of OU because she was so traumatized and afraid to see her rapist on campus.”

The numbers in the report told troubling stories — 43 percent of respondents who said they experienced sexual assault said it occurred during their first year on campus.

Forty-seven of those 63 students said they had been sexually assaulted either in OU-affiliated housing or in fraternity or sorority housing.

“We know that first year students are targeted, and so our residence life staff is really important to make sure they're educated,” Fahl said. “We know our students don't have good information when they land on campus on those issues. Most of them don't get anything in formal K-12 education.”

The phenomenon that first year students are more likely to be sexually assaulted during the first weeks of the fall semester of their freshman year is referred to as the “red zone,” according to the report.

“I can understand how first year students are at the highest risk. They know how to protect themselves less and to keep out of situations,” Boren said. “Every year you get older, you get a little wiser.”

Each year by Oct. 1, universities are required to disseminate data regarding campus security in order to comply with the Clery Act — OU does this through the annual Sooner Safety and Fire Report.

But the numbers in the Sooner Safety and Fire Report paint an incomplete picture of sexual assault on campus: the report shows 12 reported sexual assaults at OU in 2015, compared to 18 in 2014 and 22 in 2013. That’s vastly lower than the 152 who responded to the anonymous survey saying they had been sexually assaulted, but it doesn’t mean the numbers tell conflicting stories.

The Clery Act numbers show a small portion of campus sexual assault because they represent formal reports to entities like Student Affairs or OUPD. Because of the hesitance to formally report sexually assault, the anonymous survey found significantly higher numbers.

Some of that hesitance, Fahl said, can be attributed to a fear of being blamed for the assault.

“We live in a culture that blames victims — it's not just campus, it's Norman, it's Oklahoma, it's the United States, it's around the world,” Fahl said. “The fear of ‘Why would I put myself through this?’ is real.”

The OU Counseling Psychology researchers pointed to several reasons why their data is reliable — the survey was not incentivized (so, no chance at a free gift card for participation), it took about 30 minutes to complete, and respondents were a representative sample of OU’s population by race and gender. In addition to sending out the survey through mass mail, the researchers specifically reached out to marginalized groups on campus to complete the survey, Frey said.

Before students’ responses that they were sexually assaulted were counted, they had to answer a series of follow-up questions about the location and time of the assault, as well as their relationship to the perpetrator, Frey said.

WHERE WE GO FROM HERE

Frey, Beesley and Secor agreed on what they wanted to see from the university to combat campus sexual assault: honesty, education and a strong administrative response.

“I'd like for President Boren to get up and say, ‘We do take this seriously, we have a long way to go, but we're willing to fight the good fight and do things that will improve the experience on campus,’” Beesley said.

Even if addressing sexual assault on campus can bring negative attention to a university, Beesley said the honesty would be welcomed.

Boren agreed that more education could be helpful in decreasing the prevalence of campus sexual assault, but budget cuts could be an obstacle to any new programs.

“All we're doing night and day is figuring out how to cut, cut, cut spending,” Boren said. “This is one of the things I noticed — people asked, can we hire another person for autism? Can we do this, can we do that? Where do they think the money's coming from?”

Fahl said the research was helpful in determining next steps for gender-based violence education.

“We have a lot of work to do, and it's all of our responsibilities,” Fahl said. “If we're going to change our cultural norms, we all have to do something."

Boren acknowledged the work the Gender + Equality Center does in decreasing gender-based violence, but the solution to eliminating campus sexual assault?

“We try to really train students about (sexual violence), and you try to also say, 'Don't get yourself in a situation where you're incapable of saying no,'” Boren said. “Can we eradicate the problem? Not any more than we can eradicate human nature.”

Read the report in its entirety here.

Advocate and referral resource for sexual assault/misconduct issues for students, faculty or staff.

First of all great worl Dana for finding and reporting the delay in the acknowledgement. Sexually assaulting students is one of the worst cases that can happen in any institution. It is a case where the students be mentally altered tonot respond. The institution should give an explanation to the research findings and come out clear.
musee d orsay tour