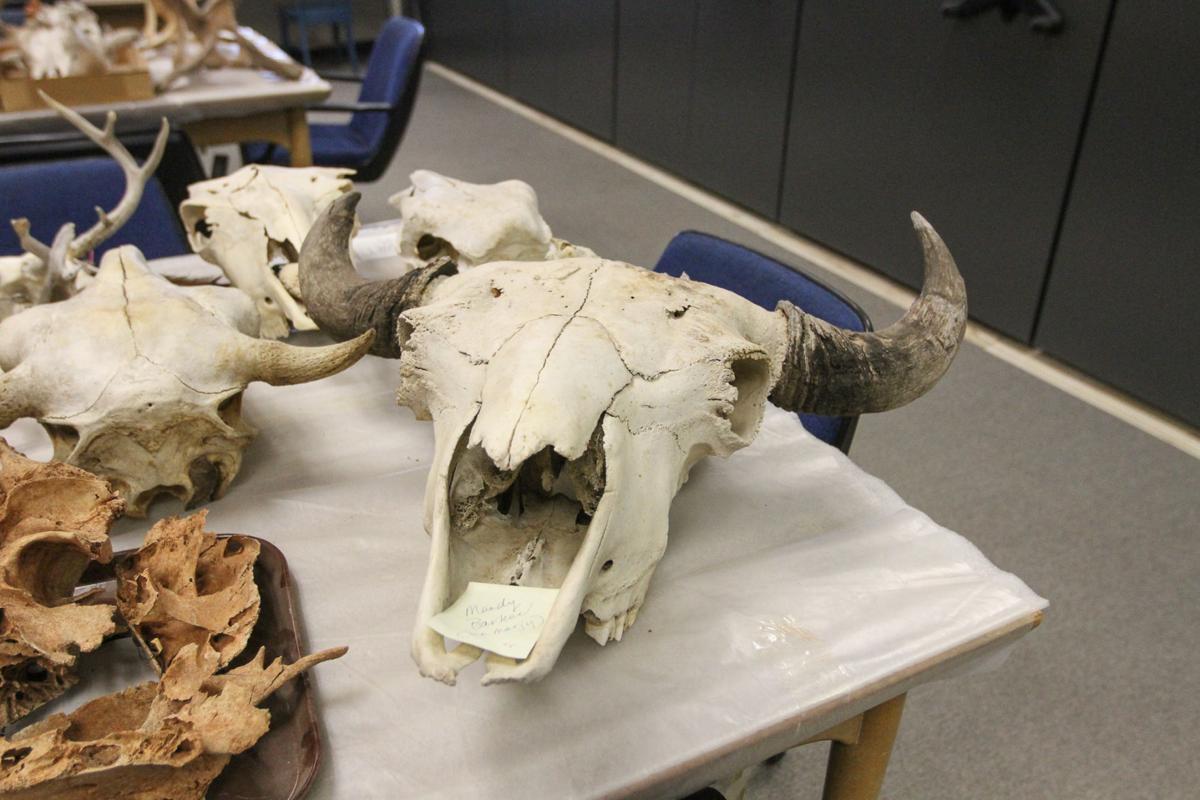 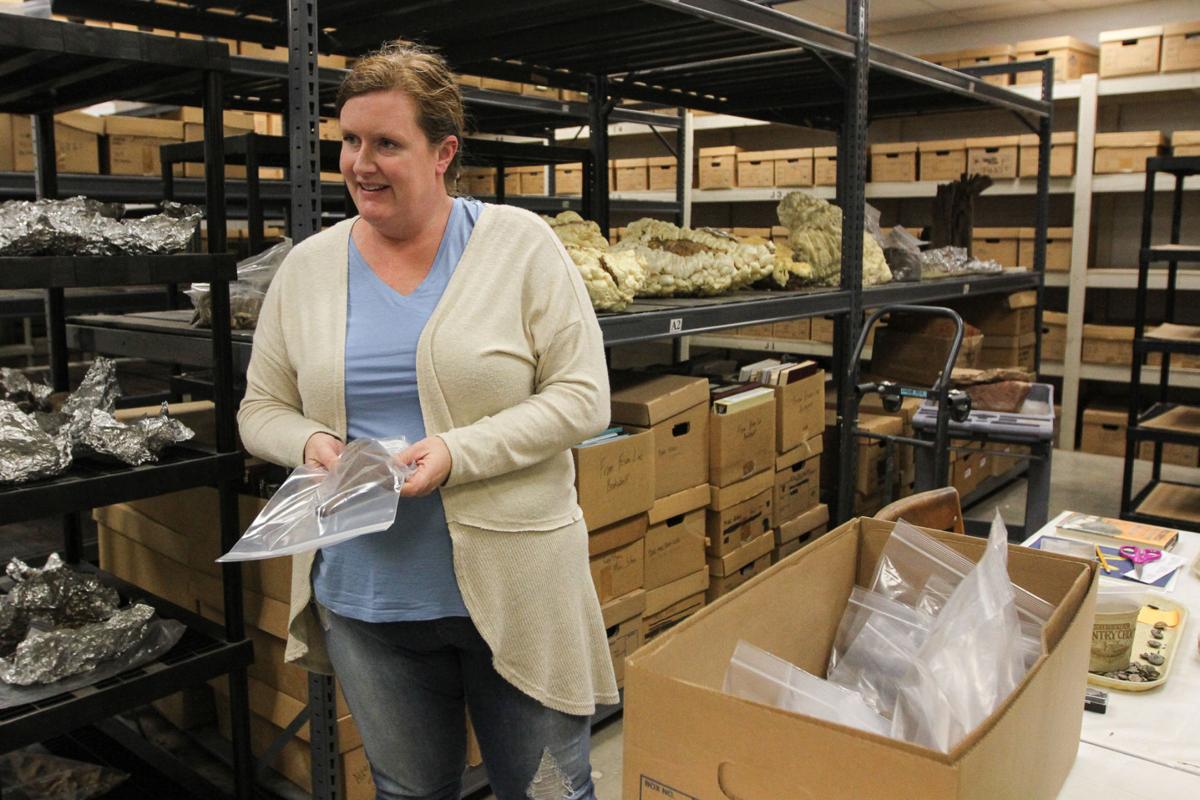 Amanda Regnier’s office is a hub of reorganization and change. Boxes of paperwork are scattered on the floor, and the walls are cluttered with maps and pictures — all evidence of the flurry of activity that happens inside the walls of the Oklahoma Archeological Survey.

The building sits across from the Lloyd Noble Center, on the corner of Imhoff Road and South Jenkins Avenue. Thousands of students and faculty pass by it every day, but not many know about the research and preservation efforts the facility undertakes.

The Oklahoma Archeological Survey was founded in 1970 by the state legislature to work on archaeological sites across the state. Regnier, director of the survey, said the department has many responsibilities.

“We have three main functions: to preserve Oklahoma’s cultural resources, to do research on them and then to educate the public,” Regnier said.

Regnier said the survey keeps all of the archaeological site files, and there are over 26,000 recorded sites across the state.

A site is a collection of artifacts, or anything created or modified by people, and the most common sites in Oklahoma are from the 1820s to the early 1900s, Regnier said. These sites include abandoned ranch homes, old wells and windmills.

However, Regnier said many of the researchers at the survey focus on precontact sites — sites that existed before Europeans visited the continent — such as earthen mounds, villages and bison kill sites, where indigenous people drove bison into canyons and killed them in a single hunt.

In addition to research of its own, the survey also works to protect possible archaeological sites.

Regnier said that the National Historic Preservation Act, which was enacted in 1966 to protect cultural resources, requires any project that involves federal funds to do a cultural resource survey to ensure that no site is destroyed.  Part of the Oklahoma Archeological Survey’s job is to review each of those projects and recommend action to preserve archaeological sites.

“So, if someone is going to build a pipeline and it’s going to go through an archaeological site, we work with them to try to figure out how we can avoid damaging a site,” Regnier said. “That may be through excavation or it may be through just rerouting around it.”

The survey is always working on a large number of projects across the state, from 18th century French traders to more recent events.

Scott Hammerstedt is a senior researcher at the survey who uses technology to research and find new sites.

“I specialize in archaeological geophysics, which is using machines like gradiometer and ground penetrating radar to sort of see what’s underground before we excavate,” Hammerstedt said.

Currently, Hammerstedt is researching the Tulsa Race Massacre of 1921.

“We were contacted by the city to use our geophysical equipment to see if we could locate graves associated with the massacre," Hammerstedt said. "And looking in some areas that are identified by historians and other eye-witness interviews."

After working in Tulsa this fall, Hammerstedt said they may have made a new discovery.

“We found an anomaly that may well be a mass grave, we aren’t sure yet,” Hammerstedt said.

Another significant project is the Courson Family Bison Research Center, a collection of over 50,000 bison bones from different time periods.

Archaeologists are examining how bison skulls show past changes in climate and are studying elements in the enamel to learn about historical migration patterns of both the bison and the people who hunted them.

On top of doing complex projects, the survey does public outreach across Oklahoma. Regnier said the archaeologists at the survey visit classrooms, summer camps and various exhibitions to communicate the basic message of archaeology and the importance of protecting sites.

“We have a whole series of things that we bring with us — bison skulls and artifacts — so that people can kind of see, ‘What does it look like when I find an archaeological site?’” Regnier said.

“They’ll find something and say ‘Hey, I found this. Can you tell me how old this is?’” Regnier said. “Now, a lot of times, it just turns out to be a rock, but also, we do have some people who have sent us things via our website and then it turns out that they have a really excellent archaeological site.”

Along with educating the public, the survey also works with a number of OU graduate and undergraduate students. Regnier said this opportunity allows students to gain a perspective they are not able to get in their classes and makes students more valuable to potential employers.

“In anthropology, they get a lot of academic experience learning theory and they learn the things they need to know to be an archaeologist, and when they work here, they get the experience that will help them get jobs,” Regnier said.

Alayjah Thompson, anthropology sophomore, has worked at the survey since September 2019. She said she was looking for a campus job and wanted to gain major-related experience, and the survey was a good fit.

While she is focused on social-cultural anthropology, Thompson said that her time at the survey has enabled her to learn about another subset of the field. Before working at the survey, she knew nothing about archaeology but has learned about excavation processes and how to handle delicate artifacts like bones.

Thompson said she is learning about the history of bison kill sites in her current history class, and she feels that she better understands the work that the survey is doing.

“Just learning about the work that’s done here and how they work with the native communities here in Oklahoma,” Thompson said. “I think that’s very beneficial to preserve the history and look deeper into why things are the way they are.”

Thompson said her favorite aspect of archaeology that she has learned through the survey is that all the bones and artifacts have a story to tell.

“I don’t know the specifics of one bone’s break, or the certain pieces, why they are together, why they are not, but based on my classes and working here, it all holds a story,” Thompson said.  “There’s always something behind it.”

While the survey helps anthropology majors gain experience, Regnier said that any student is welcome to volunteer. In addition, the survey partners with the Oklahoma Anthropological Society and hosts volunteer digs where anyone in the state can gain archaeological experience.

“That’s important too because they go on and, maybe they don’t go into the career," Regnier said, "but they understand the importance of preserving archaeological sites and cultural resources.”

Regnier said, ultimately, archaeology is a way to better understand the world. By examining how cultures reacted to sudden change and by seeing how people once lived their day-to-day lives, one can learn valuable lessons from the people who came before.

“For me," Regnier said, "archaeology is a way to understand the present by looking into the past."