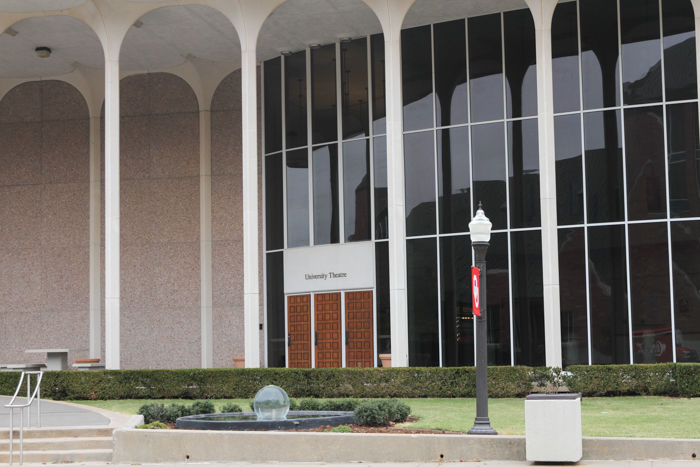 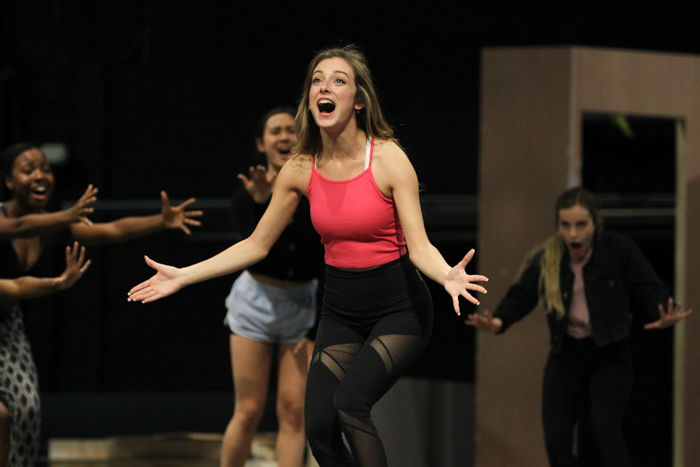 OU student actress Sophia Kaiafas during a rehearsal for "Legally Blonde: The Musical" on March 11. 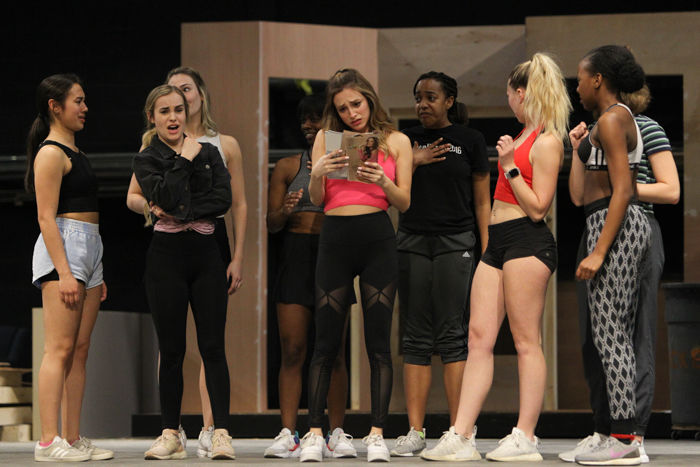 OU student actresses during a rehearsal for "Legally Blonde: The Musical" on March 11.

On the Thursday night before OU’s announcement that classes would be online for two weeks following spring break, the cast of “Legally Blonde” opened its rehearsal to family and friends.

Musical theater senior Sophia Kaiafas, who played the lead role of Elle Woods, wasn’t thinking about whether it would be her last night in the Weitzenhoffer Theatre — her only defense against the uncertainty of the situation was to pour her heart into the performance.

OU has since transitioned to online learning for the rest of the semester, and University Theatre’s season has been canceled — leaving seniors involved in “Legally Blonde” and Contemporary Dance Oklahoma, the School of Dance’s annual modern dance showcase, without a final performance to display their four years of work.

Kaiafas was an understudy in a handful of performances before receiving her first on-stage role in OU’s production of “Grand Hotel” in the spring of 2019. Elle Woods in “Legally Blonde” would have been her second role at OU.

“It was just really exciting to finally feel recognized,” Kaiafas said. “It was a lot of pressure, but at the same time, it made me feel important ... like they were seeing how hard I worked.”

Kaiafas’ role as the central character allowed her to carry the show in a way she previously hadn’t achieved in smaller roles, but that came with the challenge of much more dancing, singing and time on stage during the performance to be responsible for.

“I learned a lot from it,” Kaiafas said. “Even though we didn't get to perform, I feel like what I learned from this process will stay with me.”

Through the trial of earning a starring role and all of the technical challenges associated with it, Kaiafas learned to trust herself and her directors’ belief that she was capable, she said.

“You have to trust that what you have to offer as a performer is important, and it doesn't matter what other people think, because the right person will see that,” Kaiafas said.

Kaiafas also learned about what it means to be present in the moment. The late-night rehearsals and tiring schedules took a toll on her, but she’s learned gratitude, she said.

Musical theater senior Hannah McEvilly also played a major role in the cast of “Legally Blonde”: Paulette Buonofuonte, a beauty salon owner and Elle Woods’ ally as they both work to reach their goals.

“I think something I've learned from Paulette is she's so willing to love everyone she comes into contact with,” McEvilly said.

Paulette is one of McEvilly’s first principal roles in an OU production.

“In the past, I've been the person dancing on stage and being told exactly what to do,” McEvilly said. “It was a challenge to find themes and motivated movement without being told.”

McEvilly said she felt a personal connection to the show because after the show’s Broadway premiere in 2007, “Legally Blonde” and its soundtrack became a contemporary cornerstone that she grew up knowing.

“It definitely taught me how ... to be prepared for rehearsal and come in knowing what you want to do with your character and be ready to play,” McEvilly said. “Even though the original version of the show isn't going up ... I learned really valuable things and had really great takeaways through the rehearsal process.”

In addition to the final show being canceled, the musical theater seniors graduating this spring will miss out on the annual “industry week” in New York City, McEvilly said.

This trip, which happens “immediately after graduation,” gives the graduating class an opportunity to audition for agents and casting directors in NYC, according to the School of Musical Theatre’s website.

“I was so, so, so upset about that being canceled, probably more so than 'Legally Blonde' being canceled, because (industry week) is something that’s career-igniting,” McEvilly said.

Broadway is currently shut down, and all shows have been suspended until June 7, according to Broadway’s website — leaving Kaiafas, McEvilly and their entire class with little to audition for, but McEvilly said she's decided to go to New York as soon as the outbreak settles down, with or without help.

“Our professors are not going to let us drown and send us off into the world without having that, but that doesn't mean we can't get a head start on our own,” McEvilly said.

With shows across the country closing, actors are without their performance jobs, but McEvilly said she sees this as an opportunity to connect with others sharing her plight.

“I feel really connected to the community of performing artists around the world,” McEvilly said. “Our entire industry is dark right now. ... I think that it's really brought performers together in a way that they hadn't been before.”

Even in a typical year, Kaiafas and McEvilly would still be faced with saying goodbye to the relationships they’ve built with fellow performers and professors — COVID-19 just brought those goodbyes sooner than expected.

“I love my voice teachers and the faculty ... they're (our) family. They're like our parents basically,” Kaiafas said. “We didn't really get to say goodbye or have a moment to be like, ‘Thank you so much for everything you've done for us.’”

Modern dance and biology senior Hannah Dillenbeck is experiencing a similar lack of closure with the postponement of Contemporary Dance Oklahoma, she said.

“The past four years of work ... the performance is kind of like the celebration of that,” Dillenbeck said. “It’s a performing art — you work for the performance.”

Of the five pieces being performed, Dillenbeck had a part in four of them.

Auditions for Contemporary Dance Oklahoma happened in the first few weeks of the fall semester, and daily evening rehearsals began on a regular basis right after Thanksgiving break, Dillenbeck said.

“We were all super excited for our final performance together. It's the last time we know that we’ll all be in the same place at the same time,” Dillenbeck said.

The time commitment required by the School of Dance turned the class of 2020 into a family, and Dillenbeck said she will miss that sense of community the most.

“We ... spend so much time together working on our art form, which is kind of vulnerable, you know? You're exploring your art,” Dillenbeck said.

Dillenbeck’s professional plans haven't changed due to COVID-19 because she’s planned on returning to OU in the fall to finish her biology degree, but her classmates are feeling the pressure of an uncertain performing arts landscape, she said.

Many of her classmates have had auditions canceled or been let go preemptively from companies due to their losses amid nationwide closures, Dillenbeck said.

“There's no closure there. ... You did all the work and then ... it just dissolves away a little bit,” Dillenbeck said.

Contemporary Dance Oklahoma is rescheduled for Nov. 6–15, according to the School of Dance’s Facebook page, and “Legally Blonde” has been rescheduled for Sept. 25 through Oct. 4, said Sandra Bent, public relations and marketing coordinator for the College of Fine Arts.

Until these performances are readjusted without the graduated seniors in the fall, the coming months will be an uncertain time for the Weitzenhoffer Family College of Fine Arts class of 2020.

With Broadway closed and dance companies’ prospects unclear, a generation of performers will spend the summer waiting.

“Once all this happened ... I wished for the things that I complained about,” Kaiafas said. “I would take it all back. ... I would rather be at school and be stressed and tired than just be at home.”