The OU Board of Regents filed a protective order against NonDoc Media and Tres Savage for their efforts to make the university search and release information and reports from the law firm Jones Day regarding the investigation into former OU President David Boren and former OU Vice President Jim “Tripp” Hall.

Savage, editor in chief of NonDoc, filed a lawsuit against the regents on June 10, claiming they violated the Oklahoma Open Records Act. NonDoc requested “any and all reports created by the law firm Jones Day for the University of Oklahoma relating to David Boren or Jim ‘Tripp’ Hall.”

Jones Day investigated Boren and Hall for sexual assault on behalf of the university. The Oklahoma State Bureau of Investigation was the lead agency into criminal allegations, later deciding not to indict neither Boren nor Hall.

In 2019, Jess Eddy, an OU graduate and former teaching assitant, filed a Title IX complaint about Boren, alledging he received unwanted sexual touching from Boren, according to interviews with NonDoc. Eddy said he heard rumors of Boren’s sexual harrassment before being on the receiving end of his advances.

Boren resigned from OU in June of 2019, cutting all remaining ties with the university. Currently, the university has a statue of Boren on the North Oval.

The regents, represented by Whitten Burrage Attorneys, filed the protective order on June 15 in hopes of making all records uncovered in discovery remain private and not be released to the public. The order would prevent Savage and NonDoc from publishing any of the information revealed in the discovery phase. 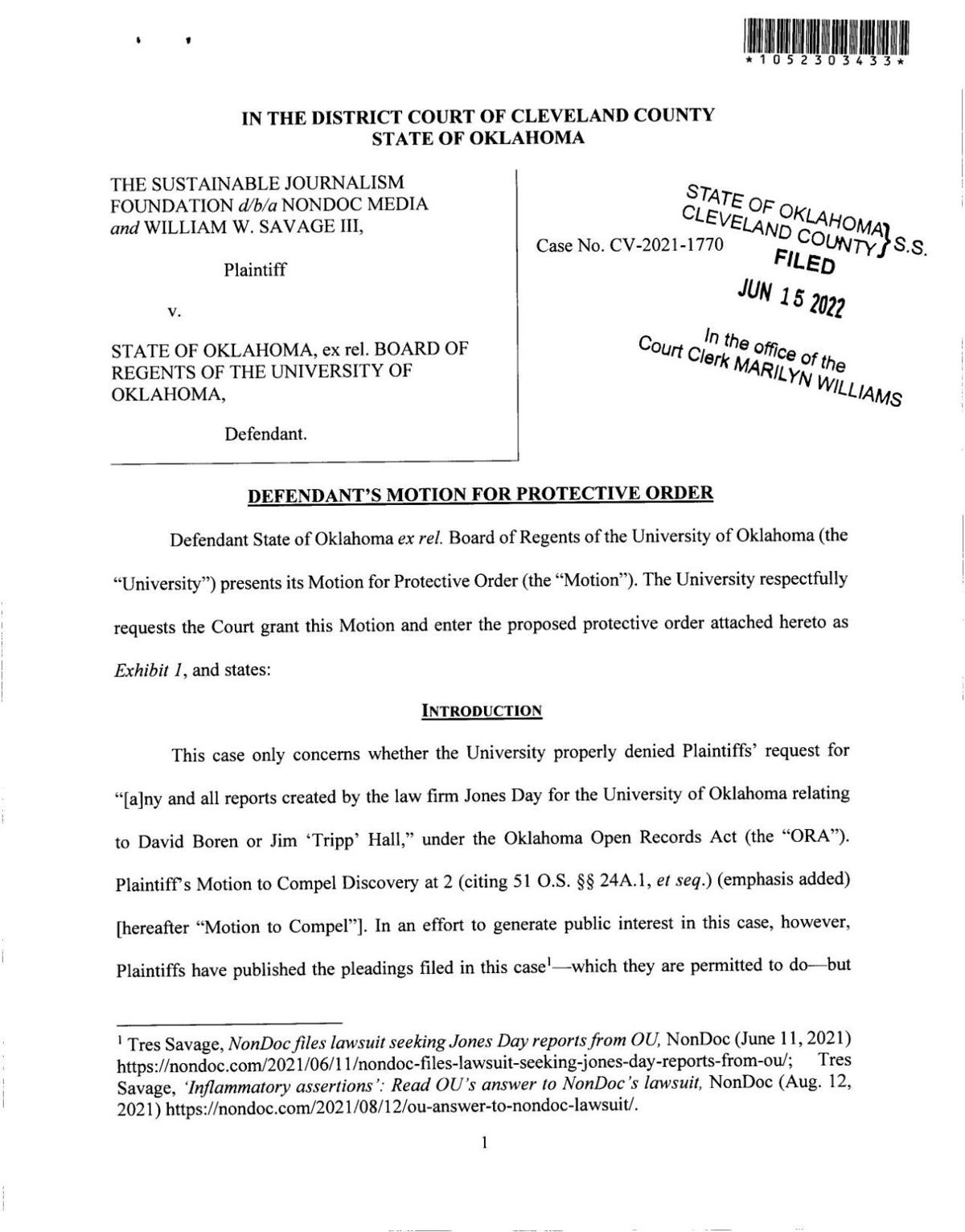 The regents cited two reasons for the protective order: the risk of the plaintiffs publishing the records found in discovery and the filing of these documents in the public record. They also said the order would “protect the University from the annoyance, harassment, embarrassment, oppression of having confidential materials published,” in the motion.

Additionally, on June 30, OU released another argument for the protective order, saying NonDoc’s belief in that since the university is a public institution its records should be public “is legally incorrect.”

“That position creates a chilling effect on all investigations conducted by the University or any other arm of the State of Oklahoma,” the regents’ attorneys wrote. “If production is compelled without a protective order, the University will no longer be able to assure informants and potential victims that their information is kept confidential. Without such assurances, no student or employee will take part in investigations involving high ranking officials of the University.”

Joey Senat, associate professor of multimedia journalism at Oklahoma State University, said the motion is “essentially asking for a gag order.” He said OU is asking for Savage and NonDoc to receive documents off the record without specifying what the documents would contain. Senat said no journalist would ever agree to those terms.

NonDoc and Savage said the university failed to discuss the potential protective order prior to taking it to court. The defendant cited one email and one phone call, which lasted two minutes according to the plaintiffs, that referenced the possible filing of the protective order.

The defendants also cited that since NonDoc published articles referencing the university’s response to the initial lawsuit, this action shows a need for a protective order going into discovery. The plaintiffs responded calling it “an absurd allegation” since the articles published by NonDoc and Savage contained only public information.

The court has not issued a decision on whether or not to uphold the protective order, however Gardner said she anticipates a hearing regarding the order in a few weeks.

Senat said he’s never seen a protective order like this in an open records lawsuit before.

“It's absurd,” Senat said. “You've got a public university claiming that it needs to be protected from annoyance, harassment, embarrassment (and) oppression by a journalist who is simply reporting on the case.”

OU sent a statement via email to the OU Daily, saying the requested protective order is a “very common tool used in litigation” and would only protect confidential information provided from the university to NonDoc, remaining in place until the court rules on the lawsuit.

Karoline Leonard is a journalism junior and summer news managing editor at the OU Daily.

Each likely 'microsoft' Qualified Companion ought to have been in the business concerning five-years and there are many tests they might have needed to have given. They will likewise have to visio online have demonstrated capacity inside the business of preparing where these individuals are talented.