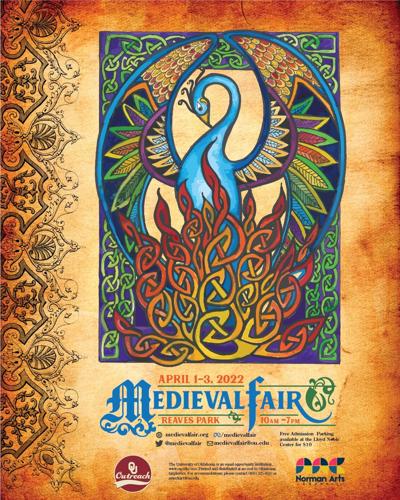 A flyer for the 2022 Medieval Fair via the event's Facebook page. 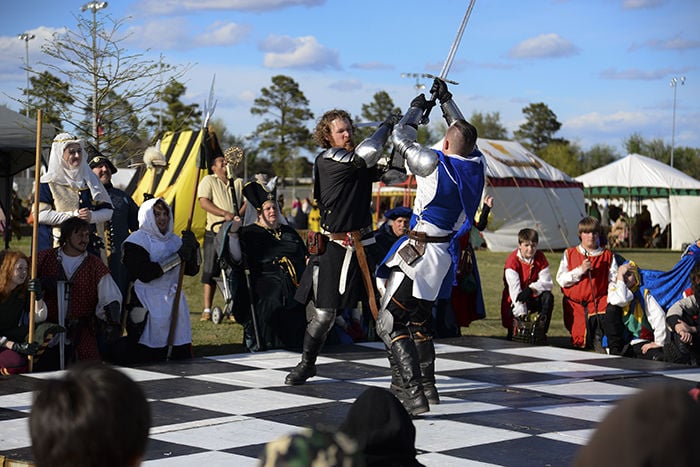 Human chess has been a staple of the Medieval Fair for years, including this performance in 2016.

Jay Edwards can’t remember a time when the fair wasn’t a part of his life.

Edwards’s older sister was involved with the Arthurian Order of Avalon (AOA) when he was a child. She would often get him involved in the productions and the society.

“I’ve been involved in several parts of the medieval fair, in the community and then as director,” said Edwards, circulation supervisor with OU libraries and improv director for the Norman Medieval Fair cast. “It’s always just been a part of my life; I can’t imagine my life without the Medieval Fair.”

In 2015, Edwards got a call from Norman Medieval Fair Director Ann Marie Eckart. She offered him a job as the improv director for the medieval fair cast and Edwards has been at the job ever since.

The fair returns on Friday, April 1 after canceling in 2020 due to the pandemic and having a smaller event in 2021 due to COVID-19 precautions. The return of the fair in full-swing has kicked the crew into gear, including Edwards.

With three decades of improv work under his belt, Edwards has been coaching the Medieval Fair cast on how to improve their improvisational skills for seven years.

Edwards has been a part of the fair in the community, performed and worked behind the scenes in the past, but of all those different roles, directing is where he felt the proudest.

“Our big goal is to make it a welcoming and inclusive world that makes you feel like you’ve stepped out of twenty-first century Norman and its England in the medieval time period,” Edwards said. “We built that from scratch.”

The Medieval Fair cast is a big piece of making this world come to life, but it’s not the only part.

Vice President of the Arthurian Order of Avalon Joshua Stout got his start in the Medieval Fair with the same group he’s still a part of.

Stout was first introduced to the fair in 2013 when he attended under the misconception that it was a lecture for extra credit in a class at OU. While he did get the extra credit, Stout wandered into a whole different world that would change his life.

“I was really looking forward to the event and learning all about the middle ages, the medieval period,” said Stout. “Still in shock of everything, I ended up auditioning for the human chess board. … I ended up being cast as the lead villain and that kind of started my involvement with the Medieval Fair.”

Another all-around fan favorite is the human chess board, put on by the Arthurian Order of Avalon for over 40 years. Every year the performance is slightly different, but it always revolves around Authurian lore. The white side, usually King Authur, is up against the black side, the adversary or villain.

They come together and decide chess is the venue to settle the disagreement and “duke it out” on the board. The fun part comes when you begin to move the human pieces. Each “piece” has a choreographed fight they must win in order to successfully claim a new spot.

Over the years, Stout has accumulated a number of favorites from the Norman Medieval Fair, but the people he’s met are at the top of his list.

“It's a bunch of people who love what they do, who are all a little nerdy in the best ways coming together to celebrate the history of the period,” said Stout.

Stout’s not the only one who has spent his life enthralled with medieval history.

Director of the Norman Medieval Fair Ann Marie Eckart first discovered her passion for the world in high school. She went on to perform for the first time in Kansas City in 1984 and has been hooked ever since. She then performed in Norman for the first time in 1986 at the Duck Pond which led to her moving down to Norman to increase her involvement in the Medieval Fair by volunteering.

In 2008, she took on the role of assistant fair coordinator and then moved up to the director of the fair in 2010 where she’s been ever since.

Eckart said she’s thankful she discovered her passion at a young age.

“I was in high school and it was something that some of my friends did and it's an amazing group of people,” said Eckart.

The inclusive nature of the fair not only reaches the cast and performers, but extends to the community as well.

“The best part about the Medieval Fair is that you can bring the whole family and no matter what you’re into, there’s going to be something for everyone,” said Eckart.

While Eckart said the fair will be back in full swing this year, she also added that the fair and all groups involved will still follow the COVID-19 precautions to ensure the event is as safe as possible.

“I think we are headed in the right direction. … If we can get together and have football games, we should be able to do an outdoor event where people are walking around,” said Eckart. “We will be following the university and the CDC recommendations.”

Stout echoes this sentiment of safety throughout the AOA with their rehearsals.

“It is frightening to think about what’s next,” said Stout. “The past two years have been hell and we don’t know what’s going to be next, but we want to keep this going and be as safe as we can when we can.”

Edwards shares the same thoughts and said the improv cast is required to wear masks at every rehearsal.

The Medieval Fair focuses mainly on the culture and educating the community on the history during this time.

“The point of the fair is to educate and bring culture to Norman,” said Edwards. “We have a really community-based town that I think we will pull together and get ahead of this pandemic.”

The Norman Medieval Fair will be a three-day event beginning on Friday, April 1 and will run through Sunday, April 3 in Reaves Park. Each day the fair will open at 10 a.m. and close at 7 p.m.

Eckart said the fair is working on a virtual element to reach a bigger audience. This element will livestream performances and serve as another platform for artisans to sell their work. She hopes this virtual fair will be completed by the time the fair rolls around.

Stout said the fair is and always has been for the community.