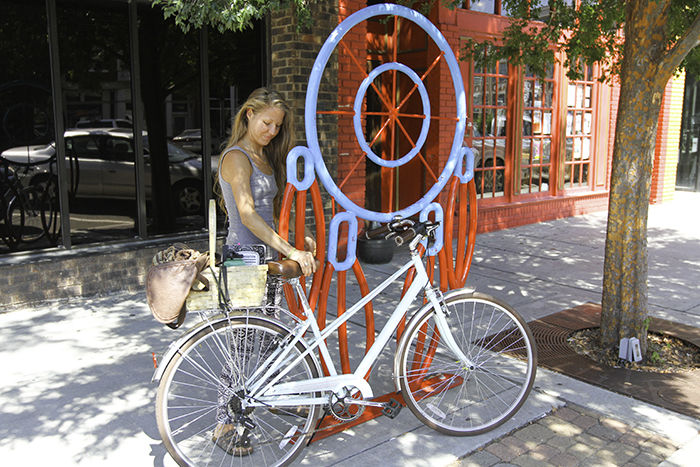 Norman resident, Cassidy Abbott, locks her bike onto one of the many Oklahoma themed bikes racks that line Main Street in Norman. The rack, shaped like a dream catcher is the result of an initiative headed by the Norman Public Arts Board Bike Rack Project. 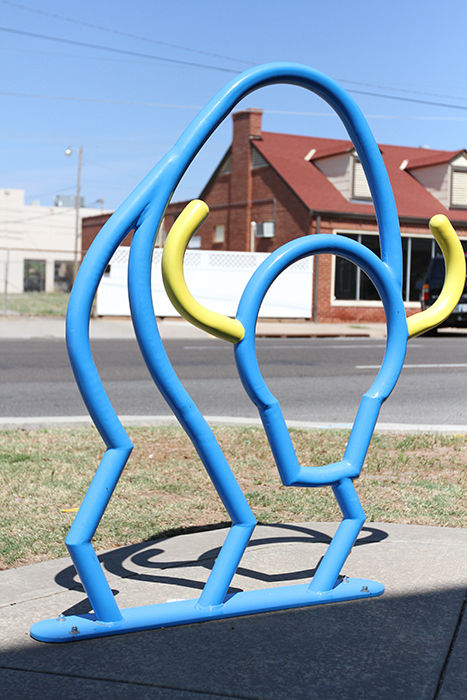 A cleverly disguised bike rack, in the shape of a Buffalo, sits on the side walk on Main Street in Norman. The piece of functional art is a result of the Norman Public Arts Board Bike Rack Project.

Norman resident, Cassidy Abbott, locks her bike onto one of the many Oklahoma themed bikes racks that line Main Street in Norman. The rack, shaped like a dream catcher is the result of an initiative headed by the Norman Public Arts Board Bike Rack Project.

A cleverly disguised bike rack, in the shape of a Buffalo, sits on the side walk on Main Street in Norman. The piece of functional art is a result of the Norman Public Arts Board Bike Rack Project.

A bright blue and yellow bison dwells on the corner of Main Street and Webster Avenue in downtown Norman. This colorful structure isn’t just a bison, however. It's also a bike rack.

Phase three of the Norman Public Arts Board Bike Rack Project will place artist-designed bike racks, just like the bison, on Campus Corner. Vice president of Fowler Auto Holding Group, the sponsor of the bike rack project and member of the Public Arts Board, Jonathan Fowler, said the project gives the biking community more infrastructures.

"The project is an attempt to saturate the core of Norman with bike racks," he said. "Phase three will create a synergy between the bike racks in downtown Norman and Campus Corner."

Larry Walker, the chair of the Norman Public Arts Board, said the bike project is another way the board is using public art to engage the community.

"It isn’t just something that looks cool, but it’s tangible and useful and needed in this town," said Debby Kaspari, the winner of the first two phases of the bike rack project and artist behind the bison bike rack.

Kaspari, a freelance artist in Norman, graduated with a degree in graphic design and illustration from the California College of the Arts. She has worked on-and-off in the business for 35 years on projects ranging from fashion illustration to recently illustrating a children’s science book. However, seeing her bike rack on Main Street "tickles" her, and she said she would like to see many more.

“In a way, it adds a little bit of interest to a project, when you know you are going to use it, as opposed to putting it on a wall and looking at it," she said. "It is actually there for other people. It serves a function."

Kaspari’s husband, Dr. Mike E. Kaspari, is a presidential professor of biology at OU. A partnership between the University of Copenhagen and the bank of Denmark funded a program that invited scholars to stay in Copenhagen from August to December of last year. The program gave the two the opportunity to strictly bike all around Copenhagen for four months. The trip gave Kaspari “a personal connection to this object I’m going to use," she said.

After the Copenhagen trip, Kaspari made a purchase from Public, a custom bike shop in San Francisco. Kaspari said she loves her pale-blue bicycle and often makes bike trips with her husband to the farmers market in Norman and Sprouts for groceries.

“I consider it a fashion statement. The health benefits are incomparable, and it cuts down on your carbon footprint,” she said.

She said she is considering making a submission for third phase of the project.

“I don’t want to get too specific because I haven’t sketched anything, but I’m thinking nature or western themes,” she said.

Kaspari encourages artists thinking about submitting an application to “be playful with it. Sit down and brainstorm a bunch of ideas. On a cocktail napkin, if that works for you."

Artists who are interested in the bike project must make a submission by Monday, Oct. 12 with the guidelines provided on the Norman Public Arts Board website. The winner of the project will receive a $200 honorarium. Artists do not have to manufacture their own design for the bike rack project; the Norman Public Arts Board takes care of the fabrication and installation of the bike rack project.

You must submit other works that reflect your artistic endeavors and represent Norman’s cultural aesthetic, but it doesn’t have to be another display of public art, Walker said.

"We have had some students from the Norman public school system turn in some great designs for this project," Fowler said. "This is a great opportunity for hobby artists to see a piece of their work and to allow professional artists to build their résumé."

Chloe Moores is an online journalism senior and arts & entertainment editor at The Daily.

I built a bike rack for 4 bikes that consisted of steel for the receiver and upward point support, and had an aluminum angle flange holding the tires like I've seen on http://magnetatrailers.com/. Not pretty, but definitely worked! We worked out the stress equations, my friend has Master's in mechanical engineering and purchased the appropriate square tubing based on a 2x stress factor - worst case 4 bike weight, all out at the end of the lever arm.