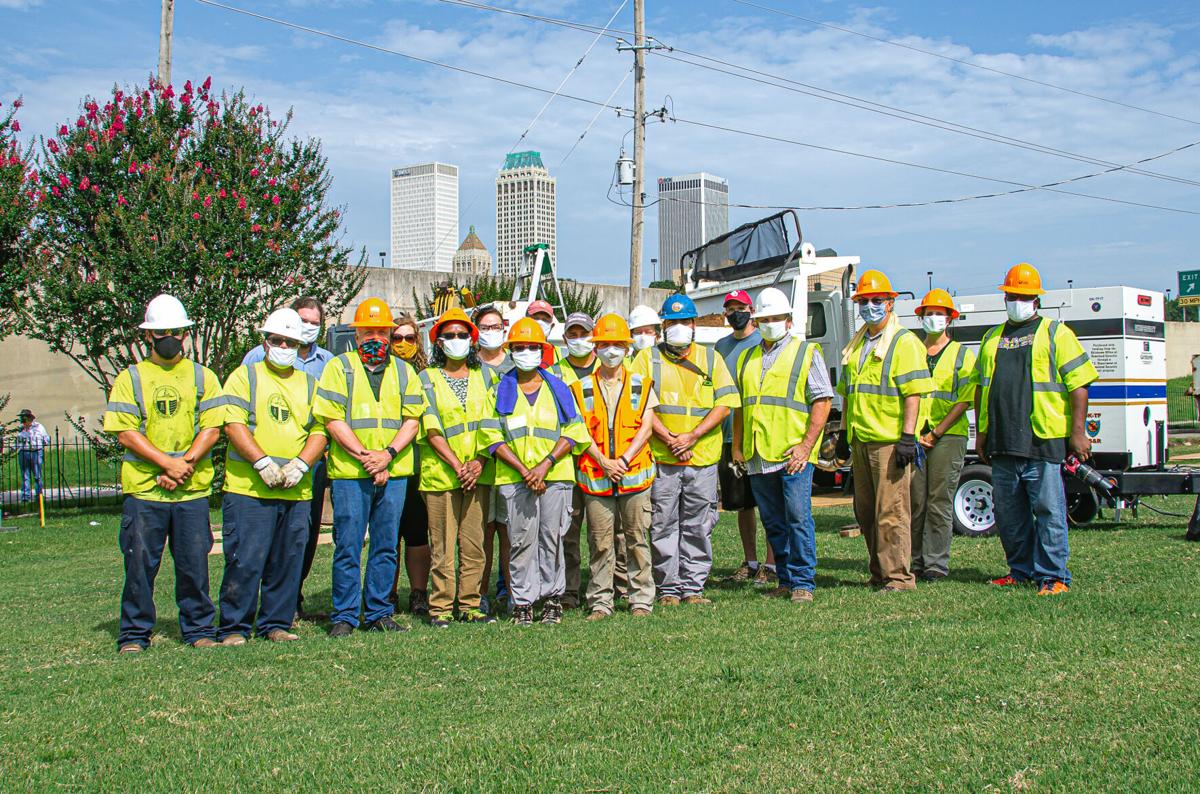 A team of excavators on July 17, 2020, led by Kary Stackelbeck, an Oklahoma state archaeologist and member of the Oklahoma Archaeological Survey based at OU, for the Tulsa Race Massacre Graves Investigation’s fieldwork. 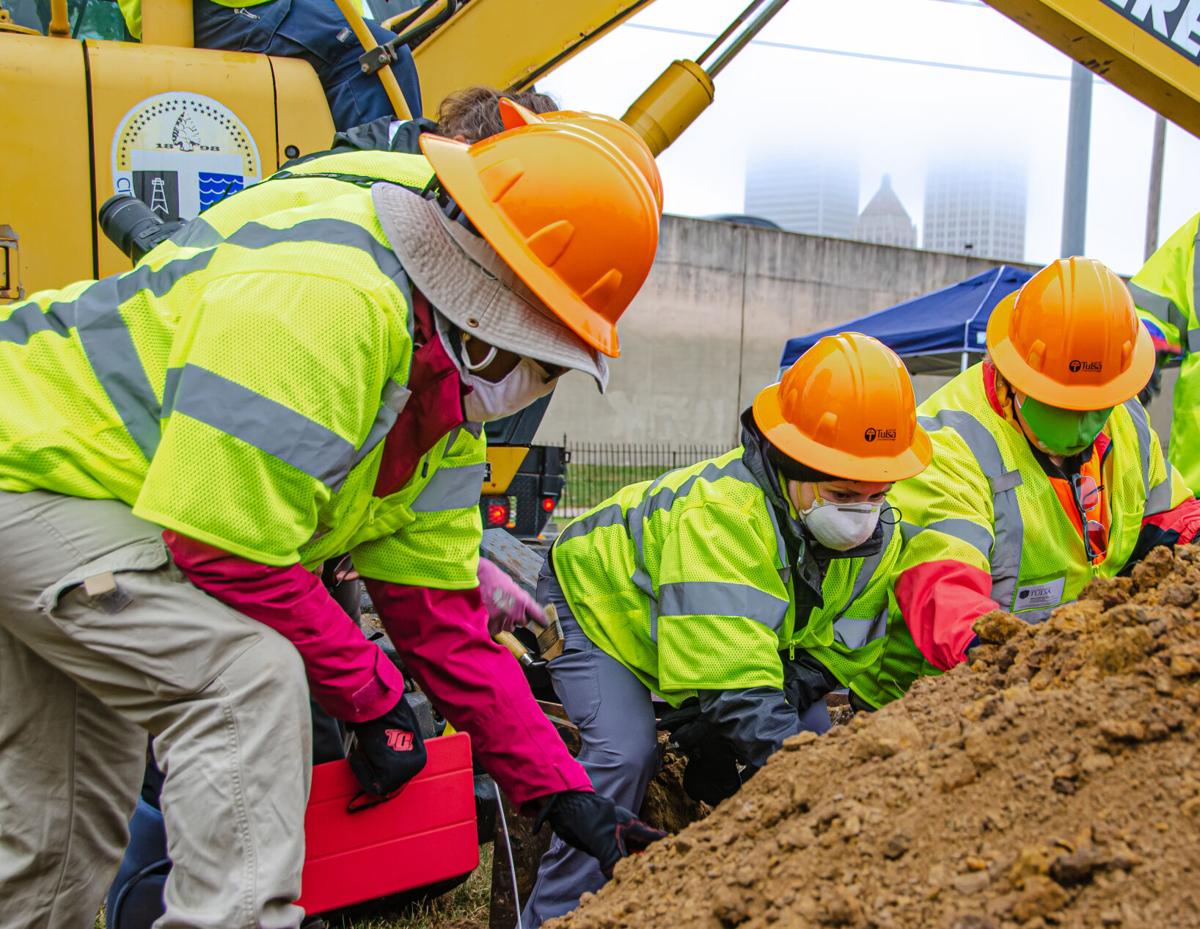 A team of excavators on Oct. 20, 2020 working at the gravesite. The team was led by Kary Stackelbeck, an Oklahoma state archaeologist and member of the Oklahoma Archaeological Survey based at OU, for the Tulsa Race Massacre Graves Investigation’s fieldwork. 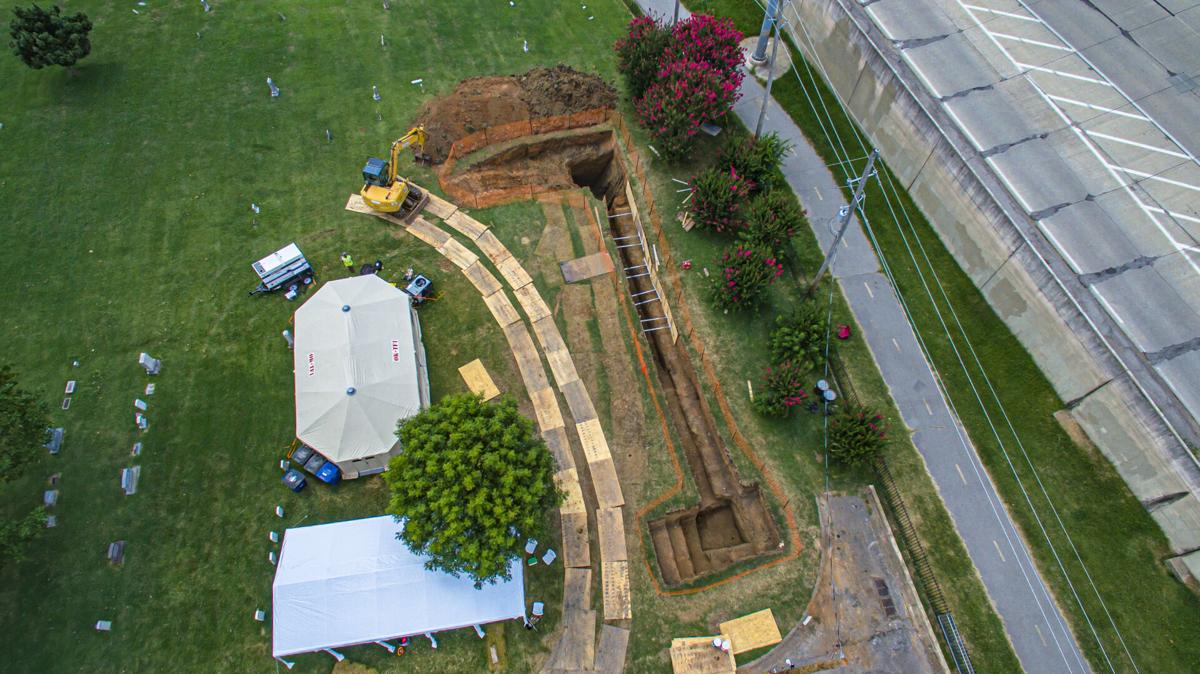 An Oklahoma archaeologist announced the conclusion of the Tulsa Race Massacre Graves Investigation’s fieldwork in a June 25 press conference at the Oaklawn Cemetery, as supporters of reparative justice seek to provide reparations for victims and descendants of the massacre.

Ground-penetrating radar identified at least twelve unknown coffins in October 2020 in the Sexton area, a historical, African American section of the Potter's Field at the Oaklawn Cemetery. Excavation and fieldwork led by Kary Stackelbeck, an Oklahoma state archaeologist and member of the Oklahoma Archaeological Survey based at OU, began June 1.

The number of confirmed graves from the site toward the end of the excavation process is 35, Stackelbeck said in an interview with The Daily. Of those, 20 have been exhumed, and an analysis of the bodies, led by forensic anthropologist Phoebe Stubblefield, will attempt to determine their cause of death.

Stubblefield said in the conference that 19 bodies came to the lab, and Stubblefield’s team has completed the analysis of nine bodies. To determine whether the individuals were victims of the Tulsa Race Massacre, Stubblefield said that she and her team will look for physical features associated with trauma, such as bone damage and bullet fragments.

Stubblefield said in the conference that of the nine bodies who have completed analysis, only one has shown such features. A male individual of African descent was recovered with a bullet placed near his left shoulder.

Members of the committee were joined by ministers and community members in carrying the remains of the bodies found at the Oaklawn Cemetery to the laboratory.

“We wrapped them in a black shroud, and we carefully walked from the gravesite itself to the laboratory,” Ross said. “It was a very important process. Each step as we were taking them, we knew that one day that we’d get some kind of a justice out of it.”

Stackelbeck said she recognizes the role of the excavation’s findings in restoring some of what was lost in 1921.

“By far, I believe this is the most, I think, one of the most consequential projects I will have ever been involved with and probably will be,” Stackelbeck said. “It’s a very common part of my job to be heavily engaged in heritage and in trying to protect places that have either been lost or forgotten to time.”

“Rolling Oaks is definitely a location of interest,” Stackelbeck said. “We did receive authorization for some of our team members … to be able to get access to complete some geophysical survey within that cemetery, and that took place in mid-June.”

According to Stackelbeck, her team doesn’t have any concrete plans to excavate the additional sites until the analysis of the bodies found in the Oaklawn Cemetery are finished.

Just how many of the bodies found at the Oaklawn Cemetery were victims of the Tulsa Race Massacre remains to be seen as well. Stubblefield said in the conference she plans to inform the public of her findings through a formal report once her research is complete.

Stackelbeck and Stubblefield’s findings will have far-reaching implications for the Tulsa community and its journey toward reparations, Damario Solomon-Simmons, a civil rights attorney and executive director of the Justice for Greenwood Foundation, said. Solomon-Simmons said the remains will encourage more perspective and awareness surrounding the massacre in the U.S.

“This is just another example (and) another piece of evidence,” Solomon-Simmons said. “This is exhibit ten that shows the world that what happened here in Tulsa was an atrocity.”

Solomon-Simmons represents a group of eleven plaintiffs suing the City of Tulsa for its role in the massacre and its failure to provide justice to its victims. The eleven plaintiffs include the three living survivors of the massacre, six descendants of victims, the Historic Vernon A.M.E. Church and the Tulsa African Ancestral Society.

“I think Tulsa has a responsibility to those who were killed in the massacre just like they do to those they injured,” Solomon-Simmons said. “They have a responsibility to treat them with respect, to restore what was lost. Obviously, they can’t restore their lives, but they should compensate the victims’ families.”

Solomon-Simmons said two critical steps Tulsa must take to ensure justice for massacre victims and descendants are acknowledgment and reparations. He said the lawsuit seeks a declaration of wrongdoing and inaction, as well as the creation of a victims compensation fund.

Anyone who wants to assist the Justice for Greenwood foundation can volunteer or donate, Solomon-Simmons said.

“I would like to say that anybody who believes in truth, justice, and reparations and wants to help us get that for Greenwood and victims of the massacre that they join us at justiceforgreenwood.org,” Solomon-Simmons said. “I know college students don’t have a lot of money, but they can certainly donate time.”