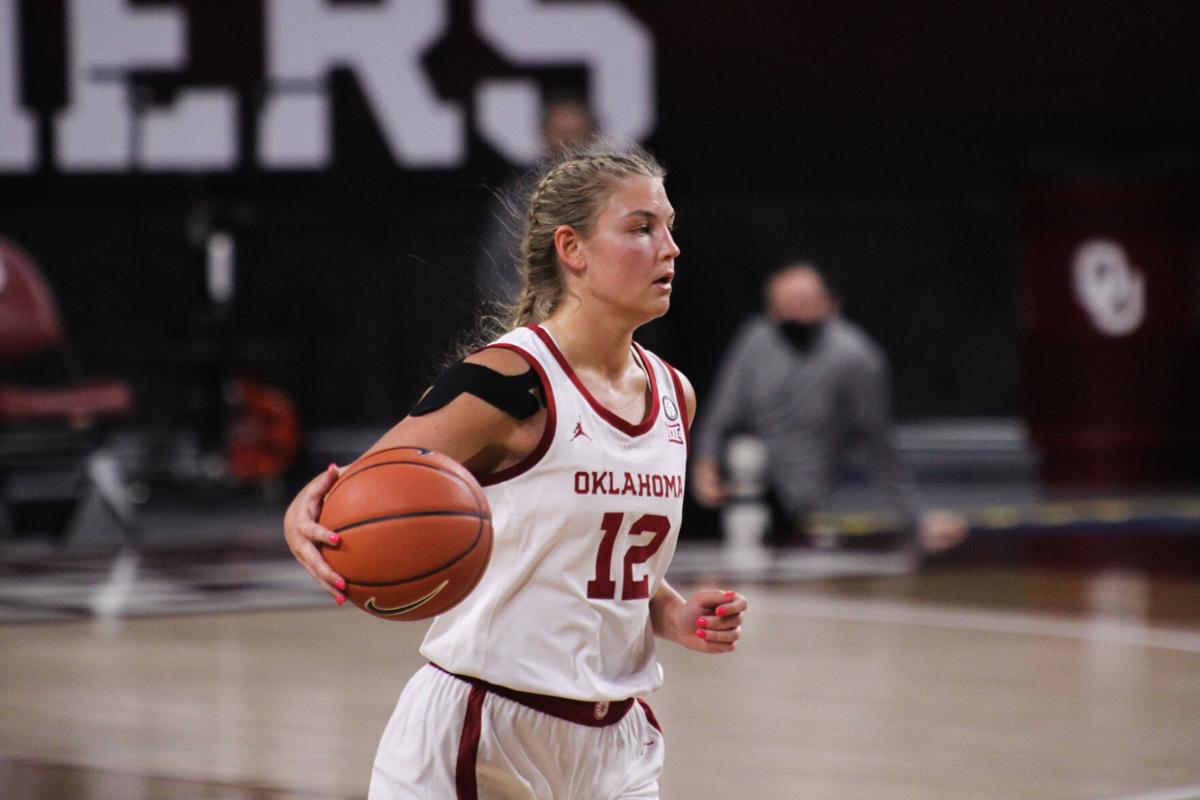 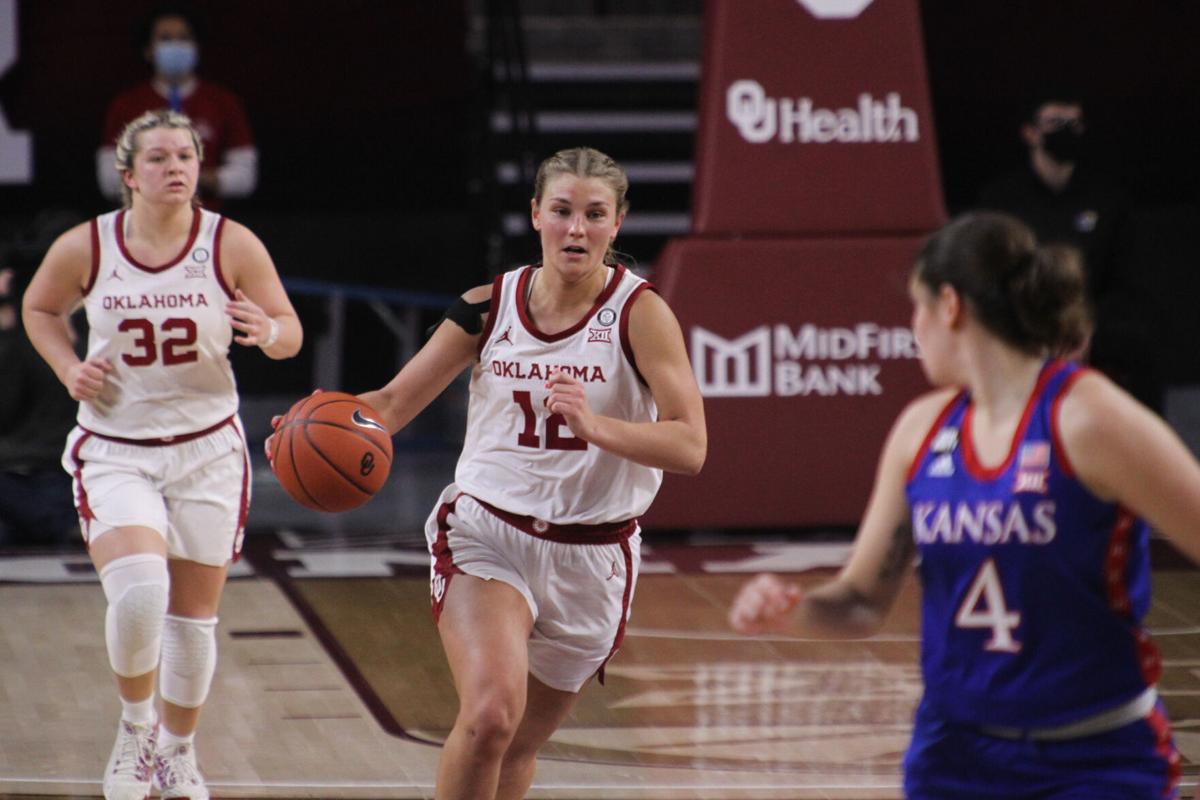 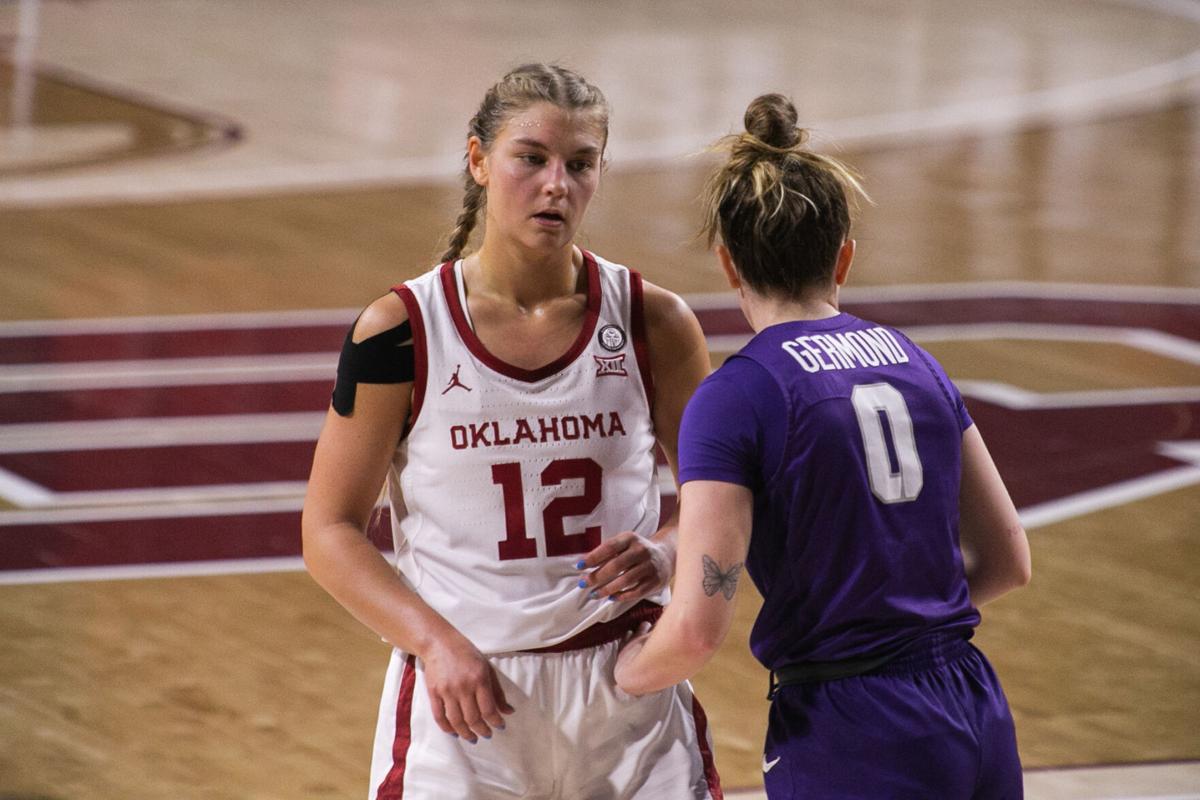 Sophomore guard Gabby Gregory during the game against TCU on Mar. 4. 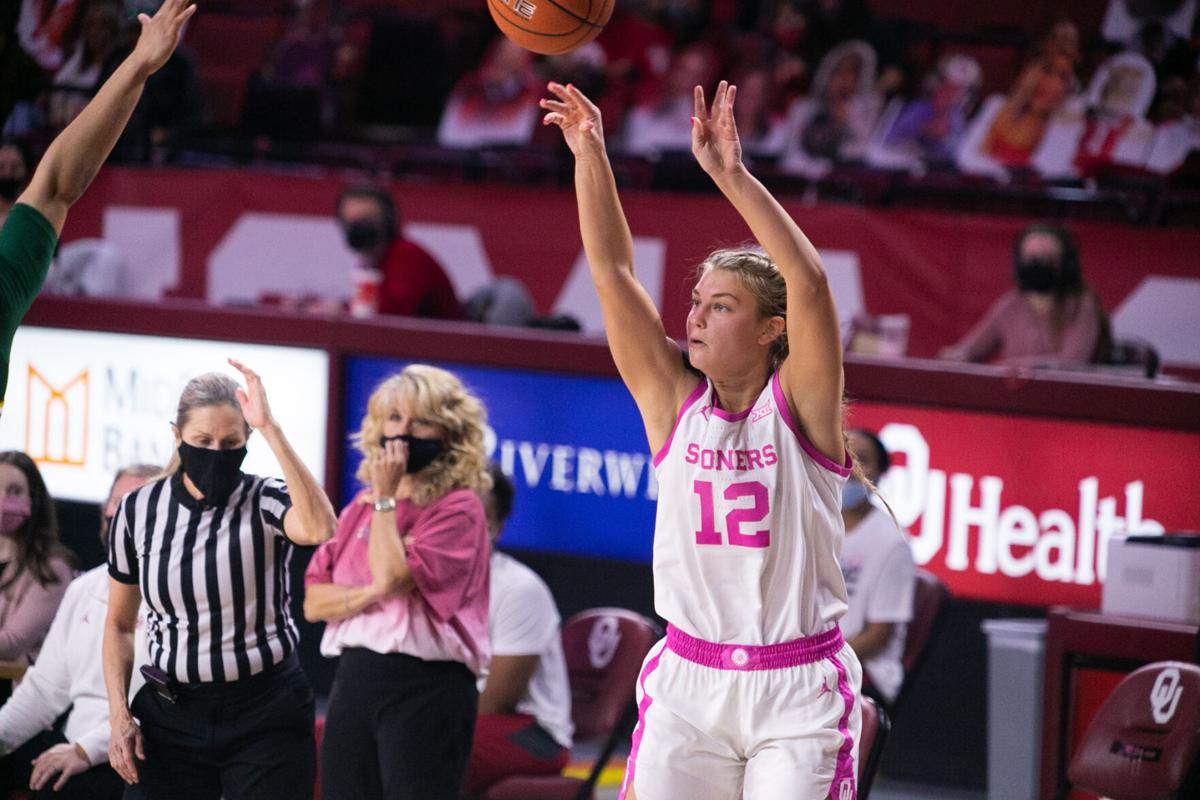 Sophomore guard Gabby Gregory shoots the ball during the game against Baylor on Feb. 21. 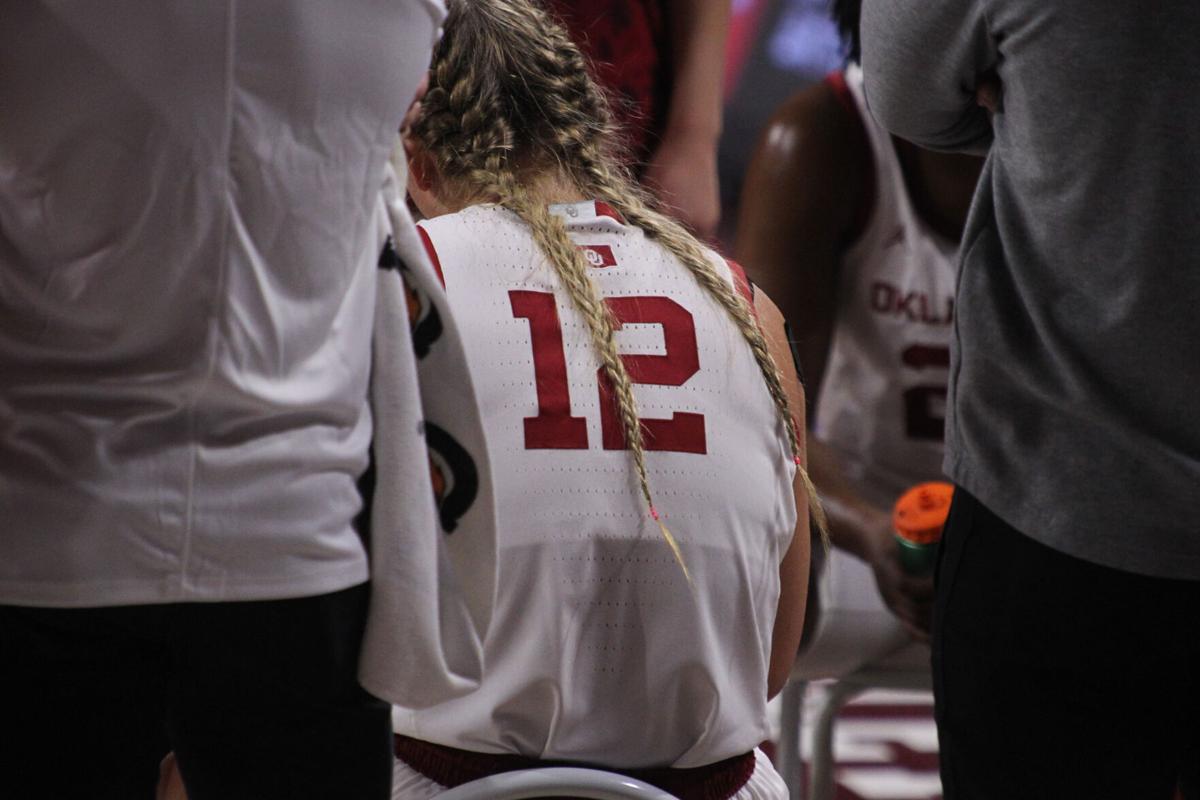 Sophomore Guard Gabby Gregory against the Kansas Jayhawks on Jan. 27.

Sophomore guard Gabby Gregory during the game against TCU on Mar. 4.

Sophomore guard Gabby Gregory shoots the ball during the game against Baylor on Feb. 21.

Sophomore Guard Gabby Gregory against the Kansas Jayhawks on Jan. 27.

Near the 3-point line in Lloyd Noble Center, a timeout was called, prompting young Gabby Gregory to sweep sweat off the court her beloved Sooners exerted their energy on.

Pictures are the only recollection Gregory, a sophomore guard for the OU women’s basketball team, has of her short-lived tenure as a ball girl for the program. A Tulsa native in a family of OU fans, Gregory attended many football, basketball and softball games alongside other OU sporting events. But it was at OU basketball games where Gregory developed her favor for the sport over others she was involved in.

One name in the Sooners’ lineup became her ultimate role model from a young age: Whitney Hand-Jones, former Oklahoma and San Antonio Silver Stars guard. Hand-Jones averaged 12 points per game during her career at OU, tallying 1,211 points from 2009-2013.

“I do remember my dad always talking about Whitney Hand, and that was always a motivating thing,” Gregory said. “He would tell me that I’m not working hard enough, I’m not doing enough, I need to be doing more, like ‘Look what Whitney Hand did. If you want to be like her, then you need to do this.’”

From a young age, Gregory’s father, Gene, would inject these words into her, not to weigh her down, but to lift her up. Taking her to numerous women’s basketball games, Gene would position his daughter to inspect the talent and confidence Hand would exhibit and utilize it to benefit her team.

With a basketball goal stood up in the driveway of their old house in Plano, Texas, Gregory and her father would practice shots after school. Now, with the practice she’s had since, Gregory was the third-leading scorer for the Sooners during the 2020-21 season.

Via the motivation her father imprinted into her work ethic, Gregory’s evident basketball talent excelled to the point of her becoming the most skilled player on the court at her alma mater, Holland Hall. Arriving at the Tulsa-based private preparatory school in eighth grade, Gregory’s presence was immediately detectable. Her mentality separated her talents from others.

Immediately upon her transition to the high school level, Gregory led Holland Hall to the 2015-16 Southwest Preparatory Conference title. Then, Holland Hall gained membership to the Oklahoma Secondary School Activities Association her sophomore year. She shepherded the Dutch to the state tournament each of the following three seasons.

“I always felt that she had a mental advantage over anyone she played against,” said Crystal Lawson, Gregory’s former high school coach. “She could go into every game knowing that she out-prepared her opponent and had put more time and effort into her game. By her senior year, she was the most well-rounded player I have ever coached.”

Not only was Gregory the most notable player Lawson, a former Oklahoma walk-on, had mentored, but also in 2019 she was named the Oklahoma Gatorade Player of the Year. She garnered 2,701 points in her high school career, the eighth most of any player in Oklahoma history.

Gregory’s abilities landed her a multitude of offers, including Arkansas, Kansas State and Missouri. Though the offers she possessed were compelling, Gregory desired to keep her platform and talent in her home state. She was bound to the university she served as a ball girl at and that she and her family devoted their fandom to.

“Basically everyone in my life wanted me to go to OU,” Gregory said. Once I started getting recruited by teams all over the country, in the back of my mind, I always thought I would go to OU.

“I visited a couple of other schools and really took interest in other schools, but at the end of the day I knew without a doubt that I would want to go to OU, even if I was just a student.”

On the exact court she scrubbed sweat off of for 18 to 22-year-olds she aspired to play like, Gregory has become a talented scoring threat. Her ability has brought the Tulsan 146 miles southwest, to the court she once dreamt of playing on.

Since arriving at OU, Gregory had an immediate impact with 45 starts, including every game of the 2020-21 season, and a record-high 30 points at Baylor in her freshman season debut. Her improvement between her freshman and sophomore seasons is evident. She scored 16.6 points per game as a sophomore opposed to 11.3 as a freshman and increased both her field goal and free throw percentages.

The mighty fall down sometimes, though. Not only was Gregory met with scoring struggles earlier in the season, but also after a season cut short in 2020 due to the coronavirus pandemic, the Sooners started their highly anticipated 2020-21 season 0-3. Gregory’s strength prevailed, though.

“Gabby Gregory just continues to be our toughness,” recently retired OU head coach Sherri Coale said after the Sooners beat Kansas State, 90-81, in their regular season finale. “She just makes plays when we gotta make ‘em. If we’re a wheel, she’s the axis of that.”

With the news of Coale retiring after 25 years with Oklahoma, the head coaching search has commenced. During the uncertainty, as OU decides who will lead its program next, there’s consistency in Gregory, who made waves in her second collegiate season. And she could make more in her third year.

“Every year that I coached her, she added something to her game,” Lawson said. “After coaching Gabby for (four) years, I knew without a doubt that she would be successful at the collegiate level because of her sheer determination and passion for the game.”