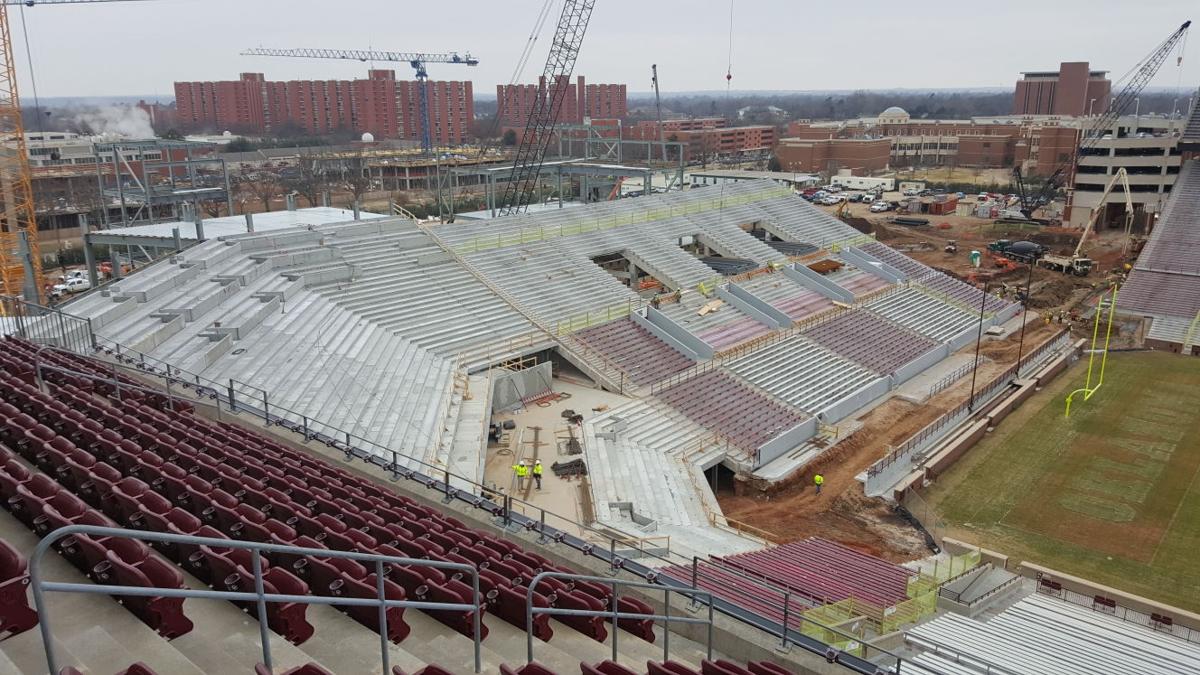 The Gaylord Family-Oklahoma Memorial Stadium under construction as of Jan. 21. According to executive associate athletic director Larry Naifeh and project managers Jim Heley and Jim White, renovations to bowl out the stadium are on track. 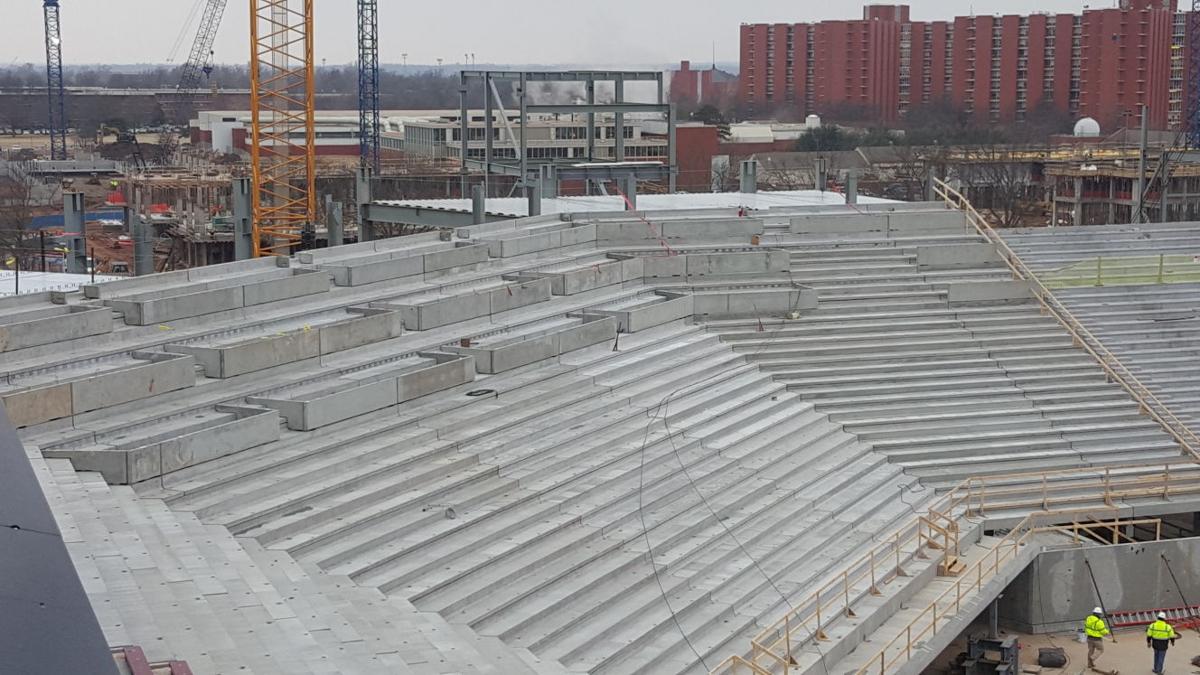 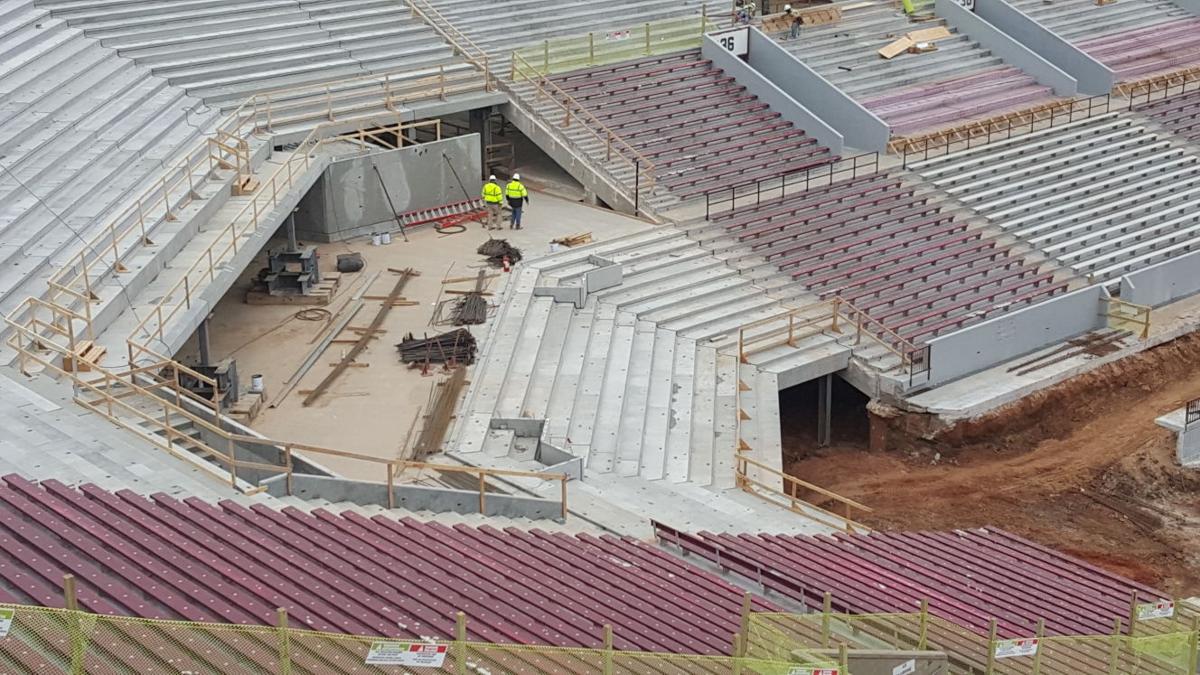 Construction crews finished laying precast concrete in the southeast corner of the stadium earlier this week, completing half of the anticipated bowled-in south end zone.

A large portion of the project appeared to be complete as OU and construction officials spoke with the media two months to the day after the Sooners' last home game when the demolition and renovation ramped up.

However, Naifeh said most of the work will come when crews begin more detailed work in the suites and facility behind the south end zone.

"It’s kind of like building a home — that infrastructure goes up pretty fast and then you have to come in and do all the finish work to close the job," he said. "We’re pleased with where we are."

White said crews have already begun foundation work in the southwest corner and will begin erecting the steel structure Feb. 6.

"It’ll take us a couple months to get that stood out," Heley said. "You have to do the precasting sequence for the steel because of the crane access. So you set steel, you set precast, you set more steel and then you set more precast. It’ll take about a two month duration."

Once the bowl is completed with an overhang above 66 loge boxes being installed, White said crews will erect the new scoreboard, which will be the second-largest in the country at 7,806 square feet.

“You should be seeing the skyline change, new scoreboard going up, somewhere around mid-March. Mid to latter March," he said.

The first phase of the renovations are scheduled to be completed before OU's Sept. 10 home-opener against Louisiana-Monroe. However, the locker room, training facilities and coaches' offices won't be completed until the next offseason — most likely in the spring of 2017, according to Neifah.

"The project will have different completion dates. Obviously, the elements that need to be completed for the first home game and the 2016 season — all the seating, the club seats, the clubs, the loge boxes, the suites — those items will be completed," Naifeh said.

Currently, approximately 120 workers are on-site six days a week for a minimum of 10-hour shifts. At the peak of the project, as many as "400-500" workers could be on-site.

However, fans in Norman may have noticed several nights in December and January when construction crews worked late into the night, utilizing the stadium's lights on the north end.

While some long-hour days are built into the schedule, according to both construction officials, White said night work is meant to keep crews ahead of schedule rather than catching up.

"If we’re here on Sundays, there’s probably some activity — maybe we had a rain day or something and we need to get it done," Heley said. "We’re not working all of our crews, but you work the select crews that got delayed and need to get caught up a little bit."

Despite ongoing construction, OU announced Wednesday its annual spring game will take place April 9 on Owen Field. Naifeh said the Sooners considered moving it but eventually determined the game nor the renovations will interfere with each other.

"A lot of elements are still in place and we’ll still be able to use elements of the stadium for the spring game — should not interfere with the progress," Naifeh said.

Everything about the Dallas Cowboys' AT&T Stadium in Arlington, Texas, is expensive. It cost an estimated $1.3 billion to construct, making it one of the most expensive NFL stadiums to build New York's MetLife Stadium and San Francisco's Levi's Stadium cost an estimated $1.6B and $1.3B, respectively, including a construction defect lawyer Los Angeles CA. Mike Bell, Designed a lot of stadiums and had one design 42k constructed. Construction can take anything from 26 months to 3 1/2 years. Some have been built in less than 2 years but it may be in countries where health and safety regulations are less stringent.

Enhancements to Oklahoma Football Stadium include outdoor club-level seating within the east and west buildings. Additionally, terraces will adorn each of these buildings, allowing for a view of both campus and the playing field. The most visible change will involve the addition of a video board at the top of the south end of the venue, along with ribbon boards along the east and west sides of the stadium, by st paul siding. Just as at Purcell Pavilion and the Compton Family Ice Arena, there will be no advertising or commercials associated with use of the video boards.

Drama- renovation TV shows often have some sort of problems that need to be resolved in a short amount of time. The home renovation alexandria va will deliver you more information about what a real renovation feels like. As the family and the host try to renovate the house, problems often come up, such as late shipments of building materials, hidden problems that suddenly get discovered etc.

The cost of the football stadium renovations is really high because the cost of precast concrete wasn't established right. It is important to choose a contractor and a concrete engineer that really knows what are the best prices and what are the best materials that can be used for a sport facility. The project will have different completion dates no matter what but these dates should be transformed in years of activities that are put on hold.