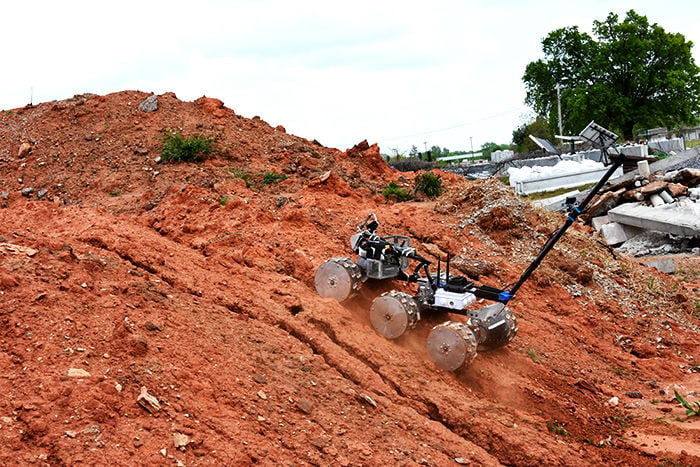 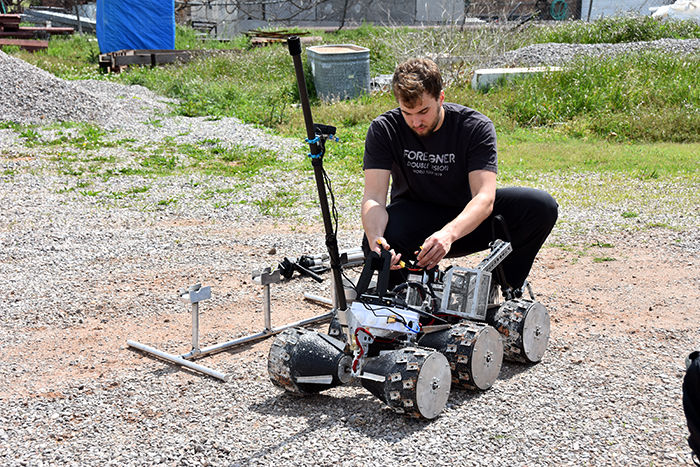 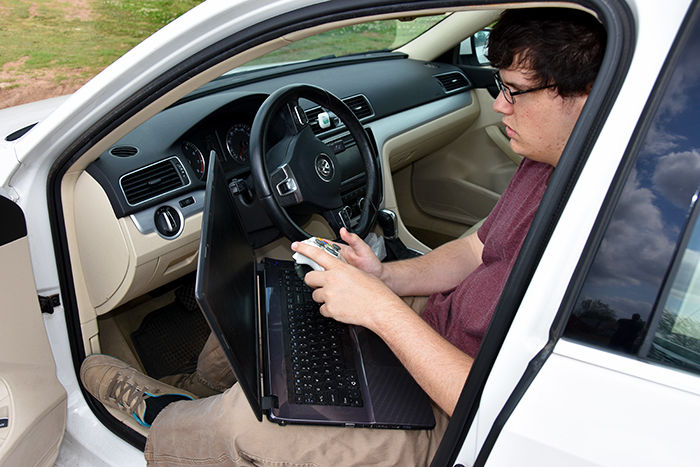 After countless hours of work, the democratically christened "Rovie McRoverface,” a rugged machine of aluminum, bolts and wires and OU's first and only Mars rover, swept its competition in a record-setting display of technological prowess and raw force.

The noisy, cluttered workshop in the ExxonMobil Lawrence G. Rawl Engineering Practice Facility was a second home to the OU Engineering students who make up the Sooner Rover Team, where they created Rovie who, despite the SoRo Team's relative inexperience, entered and dominated in the May 25 RASC-AL competition.

At the "Rock Yard" outside of NASA's Lyndon B. Johnson Space Center in Houston, teams prove the worth of their designs by remotely navigating a mock Martian surface, hunting and gathering rocks through monitors linked to rover-mounted cameras. The previous competition record was broken when Rovie doubled it, stacking up a grand total of 26 rocks.

"We knew we had won pretty much as soon as we went," team member Nathan Justus said.

That confidence did not just show up on the heels of victory. The team has been feeling self-assured since the beginning, thanks in large part to Rovie itself.

Rovie was designed from the ground up to be something different and bold.

"The original design was based on the Marsokhod design concept, which is something that the soviets came up with back in the '70s," team leader Dane Schoelen said.

In past competitions, most teams have followed in the footsteps of NASA, creating methodical machines that favor a cautious, calculated approach, but Schoelen and company set out to prove that slow and steady does not always win the race.

"Our competition is all about taking risks," Schoelen said. "That you can get more rocks, get them faster, and just score more points."

In contrast to competitors, Rovie may seem brutish, but in a contest where form follows function, elegance wasn't high on the list of priorities.

The team didn't want to build a ballerina or a bulldozer, so it settled somewhere in between. The result is a Renaissance robot, a balance between brains and brawn that no other rover present could contend with.

An outdated design from the losing side of the space race, fitted with modern technology, and operated by upstart Sooners, Rovie McRoverface, perhaps the unlikeliest contender, emerged victorious.

It is a victory that team Sooner Rover believes won't be soon forgotten.

"It just dominated so hard that I'll be surprised if I don't see another Marsokhod-style rover," Justus said. "We could just drive over whatever, we didn't care."

The team walked away from Houston with more than just $6,000, bragging rights and an impressive bullet point for their résumés. For Dane Schoelen, the project was, in many ways, its own reward.

"I think it's really cool to be able to do something for NASA that's forwarding the goals of the administration to get more people interested in space," Schoelen said. "For me, it just completely confirmed my suspicion that I'd actually like to do this kind of thing for a living, and I think some of my team members would echo that."