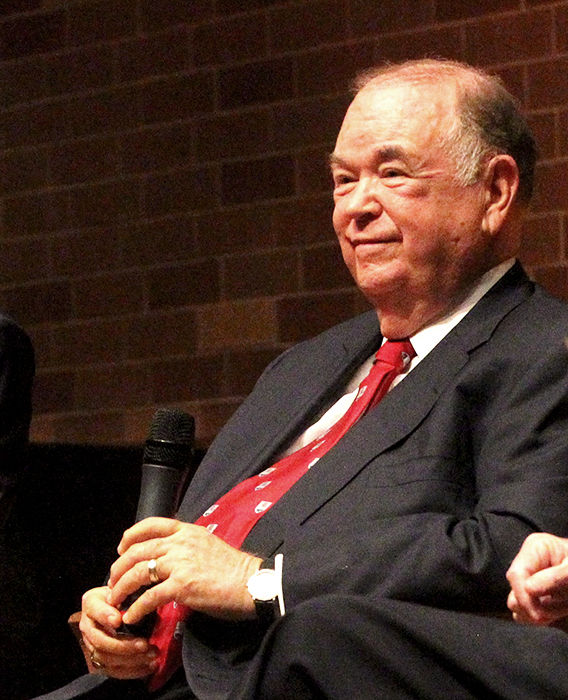 Today I have had a very informative and constructive meeting with the elected Native American student leaders at OU.

From the very beginning of the University, we have been extremely proud of our Native American heritage which has permeated our entire university. Not only have we consistently ranked among the top four public universities in the nation in the number of undergraduate and graduate degrees awarded and in numbers of instructional staff, we have been leaders in native studies in many areas. Dr. Bizzell, as President, emphasized the importance of the study of Native peoples. I have had as a goal, the rejuvenation of his efforts. The Native American Studies Program offers a BA, MA and a joint MAJD with the OU College of Law. The College of Law recently began to offer a Master of Legal Studies which focused upon the law of indigenous peoples. The College of Journalism is home to the National Native American Journalists Association. Four Native languages are taught. The OU Press has long been a national leader in the publication of topics in native history, literature, and culture. The university subsidizes The Jacobsen House to help preserve it and its historic and contemporary collections. The university has embraced our heritage by displaying Native American art and sculptures throughout our campus including iconic Allan Houser pieces at the gates of the North Oval and by the Library. In the Library, the Law School and the College of International Studies there is a major presence of Native art and culture.

My own family takes pride in our own Native heritage. I am proud to have some Cherokee ancestry and the First Lady of OU is a voting member of the Choctaw Nation.

We sponsor focused American Indian student recruitment visits and in the last two years have increased Native enrollment at OU by about 10% since 2011, we offer Horizon Scholarships andCommunity Enrichment Scholarships and other scholarships for which Native American students can qualify. At the request of Native students at that time OU invested significant dollars in the creation of a new Jim Thorpe Multicultural Center with allocated space for Native American leadership groups after theprevious Jim Thorpe Center became too dilapidated to occupy.

Even our name, Oklahoma Sooners is deeply rooted in Native history. While this term, in some ways, transcends history and stands for a special spirit of family and excellence, we must never forget its history as well. “Oklahoma” is a Choctaw word where “okla” meaning people, “homa” meaning red translates as American Indians. Sooners historically reminds us of the injustice of forced migrations of Native people. We must never forget the many injustices in our history in the treatment of Native people and never stop admiring the strength of Native people who have preserved their values and whose cultures and governments continue in the face of terrible adversities and injustices. This history will be integrated into the university sensitivity training program.

Having recalled our history and our past and present efforts, more must be done.

We discussed today, more steps that need to be taken in the future. I support the effort to use the day recognized by national officials as Columbus Day, to instead be celebrated at OU in the future as Indigenous People’s Day. When the Student Congress completes action, I will approve their resolution and work with our student leaders to hold a daylong celebration of Native culture on campus, including food, dance, the arts and culture and special lectures to more broadly educate our total community about Native American history.

I will work to increase recruitment and scholarship efforts for Native American students and continue to work closely with student leaders to share their suggestions, their help, and their involvement. We will also continue and revitalize our efforts for faculty and staff diversity.

The university will look carefully at ways to better coordinate and grow the Native American Studies program into a fully fledged department at the university including adding more resources.

A tribal liaison officer will be appointed to be a part of the leadership team in the Office of the Vice President for the University Community.

Finally, we will group together existing programs and strengthen them with additional resources to create a Native Nations Center. While budgets are very tight we will seek to find appropriate existing space which can be reconfigured for the Center as it develops.

These are only some of the positive steps we plan to take. We will continue the very constructive dialog which we are having with student leaders and others.

With this program only American students will get some more benefits and to be also gain the advantages from the emphasize of the journalism. Embrace of the native students for british essay writers review will not from the president it was from the minister of the education.