Creative Media Production senior Chris Oven sits in this living and poses for a virtual photo in his graduation gear.

Editor’s note: Read this story in the April 2020 edition of the Crimson Quarterly magazine. An online version of the magazine can be found here.

On Thursday, March 12, I walked into my capstone class two minutes late (don’t worry, Mom — I still beat the professor). During my hurried walk from the Duck Pond lot to Gaylord, I wondered if this was the last time I’d be attending a college class. But I was late, so the thought faded quickly.

Class ended, and I met a friend in front of Bizzell and headed to the Union for Graduation Gear-Up. After buying our caps and gowns, I walked to work in the football stadium, where I’ve spent the last two years interning in OU’s Athletics Communications department. It was around 11 a.m.

For the next three hours, a group of us — interns and full-timers alike — sat in the office as the entire sports world came to a screeching halt. The NBA suspended its season the night before and nearly every league and conference followed suit on Thursday. Unprecedented. For a group of us whose lives — and livelihoods — revolve around sports, the news was stunning. What do we do now?

The thought returned. Maybe that actually was my final class of college. There was no more work to be done that day, so two other interns and I packed up and left. We realized we’d better say goodbye for who knew how long. Someone joked, “See you in the fall!”

It wasn’t supposed to end like this, but it did.

Just 48 hours earlier, it would’ve been an unimaginable scenario. You always picture those final moments of college — walking out of class the final time, spending those last late nights with friends and walking across that stage — but you certainly never picture those moments being stolen by a global pandemic.

To the Class of COVID-19, er, 2020, you probably feel like you’ve had those moments stolen from you. You’re right, and it’s okay to be disappointed. The decision had to be made, and it was the right one to protect the greater good. And it’s disappointing. Both can be true.

The older you get in college, the more you say you’re ready to be done, but the less you accept that it’s almost time to go. We find ourselves wishing for just one more of what are seemingly routine moments — one more morning class, one more lunch on campus, one more trip down the South Oval. We took those things for granted, even if we tried not to.

Thank you to every professor and mentor for all you do — not just for me, but for every student at this university.

Thank you to my HSLC fam, for the Tuesday nights, the friendships and that red Sooner Legends carpet.

Thank you to the Ath Comm crew, for the stocked coolers, inside jokes and so much knowledge and experience.

Thank you to Camp Crimson, to my Gaylord people, to my closest friends and to my family.

Thank you to the University of Oklahoma for the best four years and a lifetime of memories and friendships.

I hope the entire Class of 2020 takes the time to express their own gratitude to each and every person who helped make the last four years what they were. I know we all have the time.

Boomer Sooner and Live On, University. 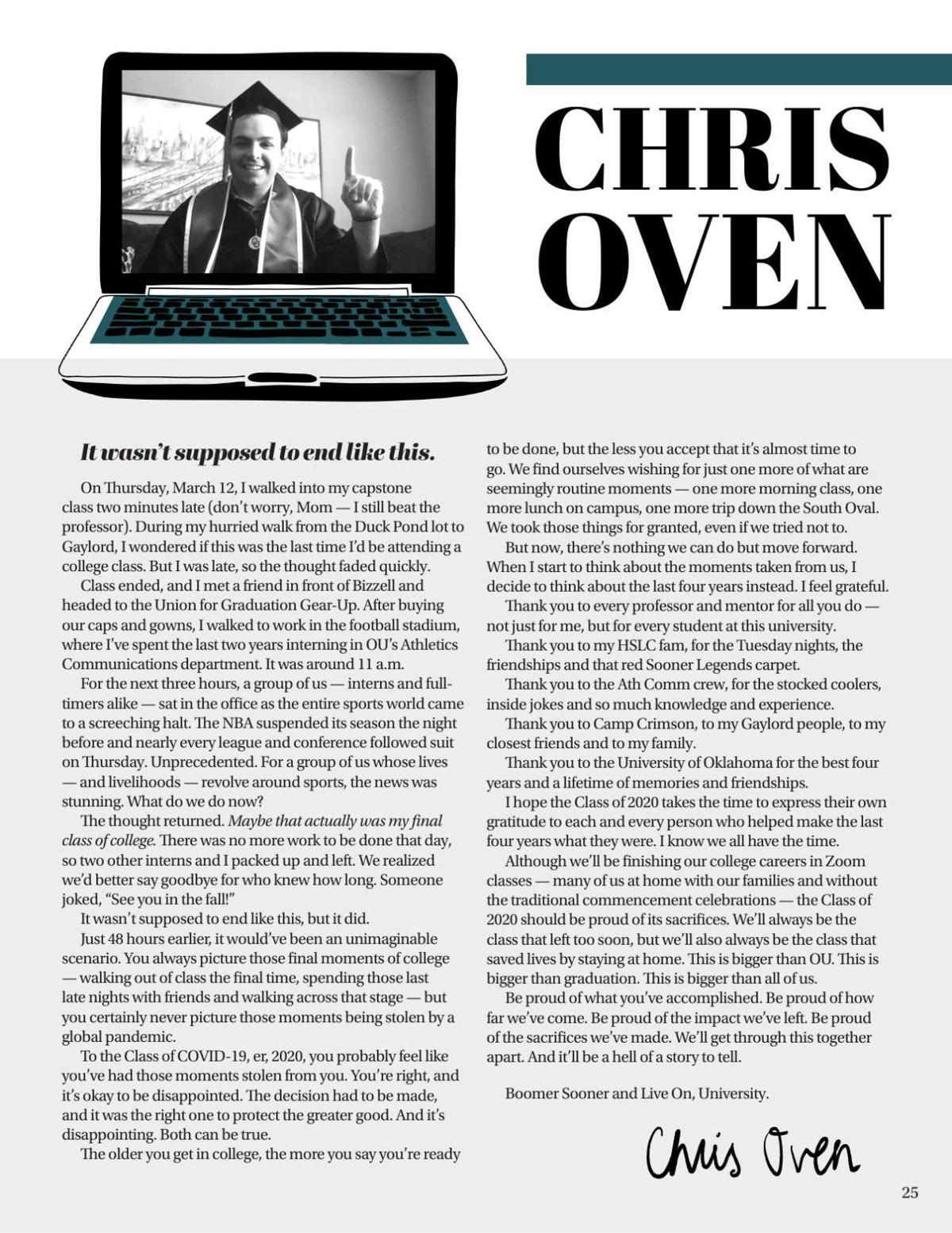