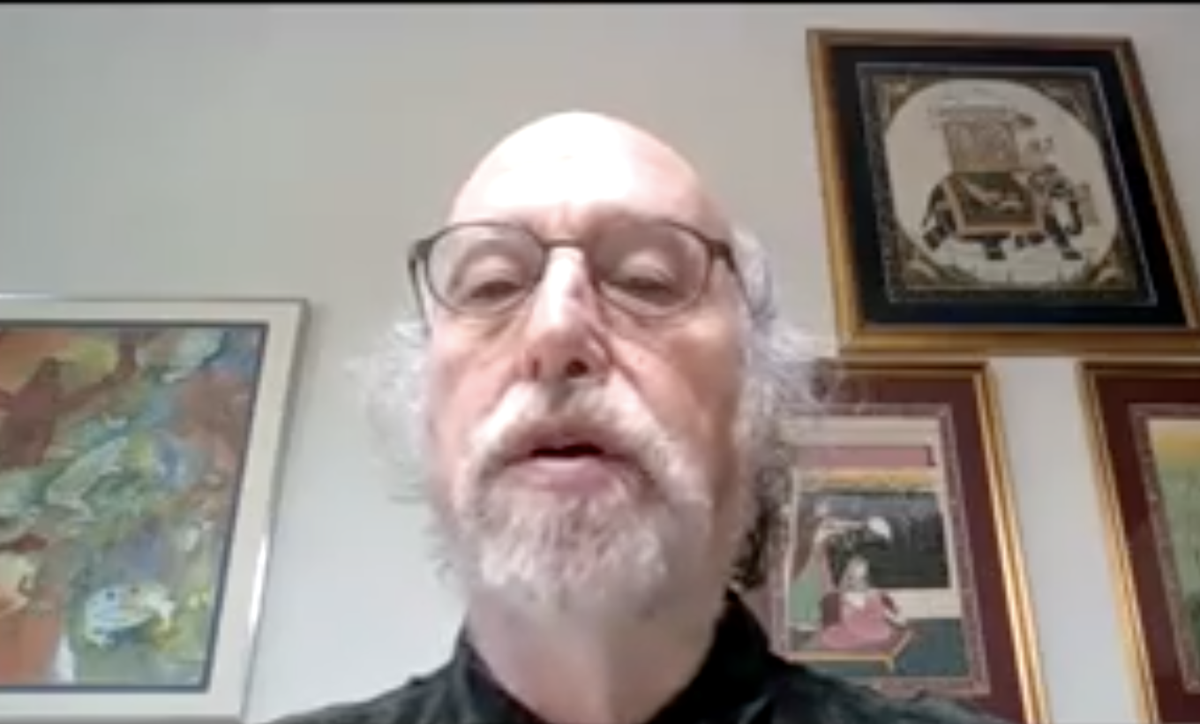 OU’s chapter of the American Association of University Professors hosted a panel titled “All You Wanted To Know About the Dashboard Board Data, But Were Too Afraid To Ask,” regarding questions, concerns and suggestions on OU’s dashboard data.

The COVID-19 dashboard operated by OU Health Services showcases data from tests conducted at OU Health Service providers, such as Goddard Health Clinic, and includes data on Cleveland County residents obtained by the county and state. During the panel, OU professors vocalized their concerns that the data was not accurate and discussed what this could mean moving forward.

The university launched its online COVID-19 dashboard for the Norman campus on Aug. 28, 2020. According to an OU spokesperson, the screening and reporting tool has been in existence since March 21, 2020, updating its criteria as the COVID-19 situation evolved.

“Health screening and reporting has been part of the university’s COVID-19 response from the beginning,” the spokesperson said. “The university’s first communication to the OU community on COVID-19, which was sent Jan. 27, 2020, advised (in part) that OU faculty, staff, students and visitors who had recently traveled to or would be returning from China were required to contact OU Health Services to arrange and complete an immediate medical screening.”

The panel was moderated by political science professor and president of OU’s AAUP chapter, Michael Givel. Stephen Ellis, a philosophy and economics professor, and journalism professor John Schmeltzer were the featured panelists. Also in attendance was Amit Baishya, an associate professor of English.

The professors criticized aspects of the university's COVID-19 dashboard, including the accuracy of its numbers and its voluntary reporting model for tests conducted outside of OU Health Services

“So here is the question: Is the collection of this data complete?” Ellis said. “The answer depends upon what data you’re talking about.”

State and local data included in the dashboard is accurate, Ellis said, as the numbers are reported from city and statewide health department sources. He said when it comes to student data, the reported numbers may not reflect the real amount of cases.

Ellis said the number of COVID-19 cases on the dashboard is dependent on tests conducted by Goddard and those that are self-reported. He said many students are not reporting positive tests taken outside of campus, resulting in inaccurate numbers.

Ellis estimates there are around a third of students who are not reporting outside positive tests. In an interview with The Daily, Ellis said he figured that number up by comparing the list of ill students provided by the university with the amount of students who had emailed him regarding a COVID-19-related absence.

In an email to The Daily, the OU spokesperson wrote, while OU does not require students to report positive test results conducted off campus, they do encourage those who do test positive to notify OU Health Services.

The spokesperson wrote under current university policy, students, faculty and staff must fill out the screening tool if they are experiencing symptoms, have had close contact with a positive individual or tested positive or have recently traveled internationally.

“The university urges all community members who plan to be on campus to take personal responsibility in adhering to OU’s COVID-19 protocols, which include the screening tool,” OU News wrote. “Completion is a requirement as it relates to a condition for access, clearance or some other action requested by the university.”

Ellis said he believes OU doesn’t have a “great handle” on COVID-19 within smaller living areas on campus, and transmission rates were being severely underestimated.

“We could probably just look at the county COVID rate and figure out and adjust for the demographic composition of OU and learn a lot about what is likely to be our real student and faculty COVID rate,” Ellis said.

Schmeltzer said the biggest issue with the data is that COVID-19 reporting at OU was voluntary. He said testing done outside of Goddard Health Services does not have to be reported to the university, meaning those who don’t self report aren’t included with the dashboard data.

According to the OU News email, greek houses are privately owned and off campus but are still counseled by OU’s Division of Student Affairs regarding testing, contact tracing, isolation and other safety protocols. OU News wrote because each chapter operates individually, OU cannot directly track positive cases for the greek houses.

“The university encourages all students, regardless of whether they live on or off-campus, to notify OU Health Services if and when they test positive for COVID-19,” the spokesperson wrote.

Ellis said because he believes OU is unclear on student and faculty exposure rates, the university may also be underestimating transmission rates.

“You’ll hear OU administrators say, ‘One of the safest places to be from COVID is on campus,’” Ellis said. “I think the case for that is not proven. That’s the accurate way to put it.”

Ellis believes the university has a “false sense of security” with having fewer in-person classes, due to the data not fully reflecting transmission. He said people forget the strict rules they would have to adhere to for safe in-person education.

Ellis said OU has “fallen down” when it comes to social distancing, saying that six feet of marked distance between desks is not enough to account for the space students take up themselves.

“They have little marks on the floor that are six feet apart from the others on the floor. Well, I have yet to meet anyone who was a dimensionless point.” Ellis said, “You really need things at eight foot (distances), and that's only if people will sort of stay where they're supposed to stay.”

Schmeltzer said in-person labs at OU have no or limited social distancing, which he believes is part of the issue. He said another concerning fact was the number of faculty members with children who attend Norman K-12 schools, six of which have double-digit numbers of children in isolation.

“While effort was made to assign in-person courses only to classrooms in which space was available to socially distance, there are some laboratory spaces, including experimental and computer labs, that could not provide social distancing at six feet without significantly impacting enrollment capacities and students’ progress to graduation,” OU News said. “Some of these courses have activities that do not allow static social distancing in which students need to move past each other during the activities or use common equipment. For these situations, additional PPE is required.”

Ellis displayed a graph with three lines that represented community, student and faculty transmission among high schools in Norman. Ellis pointed out student and faculty rates were higher than the community, only dipping below during winter break. The graph displaying middle school data closely resembled the high school, while elementary was “slightly better” but not demographically adjusted, according to Ellis.

“You would expect students to have a really low rate,” Ellis said. “We're not seeing that in Norman Public Schools, which suggests that we're probably not seeing that anywhere.”

Due to an audio issue, the Daily reached out to Schmeltzer for clarification on a question regarding the difference between rates of Norman Public Schools and OU.

Schmeltzer said Norman public school’s rates are higher than OU’s because parents must let the school know when their child is sick.

“The data (for OU) is very questionable,” Schmeltzer said. “You go and look at the same data, you look at the data coming out of the Norman public schools. They're requiring the families to report when their children are ill. They require their faculty report if they’re ill. We don't have a requirement for faculty even, so it's all voluntary. That’s why the data is suspect.”

Schmeltzer said a lot of illness that happens past dormitory housing is not reported, leaving gaps in the dashboard data.

“OU acts as if it’s ‘hear no evil, see no evil.’ If it happens west of Elm Street, it’s not included in the data. Yes, it’s sororities and fraternities, but it’s student housing,” Schmeltzer said.

Schmeltzer said another issue was the lack of a reporting form until October, which has left more gaps in the data.

“They didn't create that form until October. After we went on the air with (KFOR4), they finally got the reporting form up. So there was no requirement for students to go and report that they were ill (before that).” Schmeltzer said. “The data that OU has recorded is just completely useless.”

When asked how the arrival of the vaccine will change things and how safe it would make returning to in-person classes in the fall, Schmeltzer said he believes if the majority of students don’t get vaccinated, being on campus will continue to be risky.

Ellis said he wasn’t sure what the university planned on doing when it came to resuming campus operations, but what would be “the most helpful” was reliant on who and how many people were vaccinated.

“COVID can be rough for people at a young age,” Ellis said. “I think people think they’re bulletproof. The concern is that vaccination rates will slow down when we get to that cohort. I sure hope not.”

OU is currently providing vaccines to all groups in Phases 4. As of April 2, over 32 percent of Oklahomans have received at least one dose, with over 18 percent being fully vaccinated.

When asked about OU’s COVID-19 impact rates on public health and community, Ellis stated that a subcommunity like OU can harbor lingering COVID-19 infections, and the concern is how often that subcommunity is coming into contact with the larger population.

The OU spokesperson said the university maintains, to the best of their knowledge, the COVID-19 dashboard data is accurate and based on the latest numbers provided to the university by OU Health Service as well as state and county health departments.

Katie Hallum is a journalism and international area studies double major who joined The Daily's news desk in spring 2021. Katie is a Tahlequah, Oklahoma native and citizen of the Cherokee Nation.