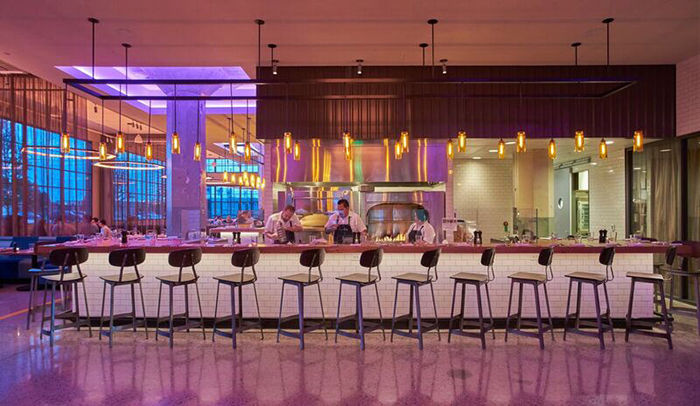 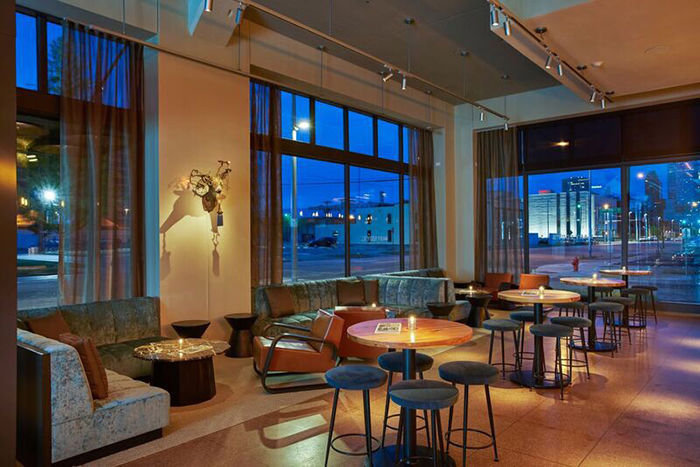 21c, a fairly new museum and hotel in Oklahoma City, is an architectural gem an OU's alum architectural firm had a part in designing. The building is a one stop destination, combining an art museum, restaurant and hotel into one location.

The franchise, located in the heart of Film Row in Oklahoma City, is currently housing an exhibit titled “Labor and Materials” and will next host “Fanciful: Art at Mary Eddy’s." The art museum is free, open all year, and there are public docent tours at 5 p.m. every Wednesday and Friday..

The property that 21c is located in was once the Fred Jones Remanufacturing Plant. David Hornbeek of Hornbeek Blatt Architects said their firm has worked with the Hall brothers, heirs to the Fred Jones estate, during previous attempts to put the The Academy of Contemporary Music at the University of Central Oklahoma performance lab and the Oklahoma City University Law School in that facility. So, when the Hall brothers and 21c asked for submissions, Hornbeek Blatt Architects submitted their knowledge and were selected.

Hornbeek, an OU alum, said that the reason that their firm was selected to convert the previous remanufacturing plant into a museum and hotel space was because they has experience working with historic preservation.

21c’s building was an “architectural gem,” which sets it apart from other destinations in Oklahoma City. The Fred Jones Remanufacturing Plant was originally designed by Henry Ford’s architect to build Model-T’s in the 1920s, Hornbeek said.

The firm, which is located in Edmond, Oklahoma, worked with Deborah Berke Partners as consultants on 21c. Hornbeek said that while the two firms currently have a great relationship, things were different at the beginning of the project.

“Our biggest problem was convincing Deborah Berke, out of New York City, that a firm in Edmond, Oklahoma, could support them at the level that they were used to with the large firms in Cinncinati, Louisville and Raleigh,” Hornbeek said.

Jay Yowell, professor in the College of Architecture, was involved on the 21c project. His involvement came about through a need for upper-end help and Yowell’s friendship with Anthony Blatt, Hornbeek said.

“It’s taking what we did in the past and utilizing it with other people to our advantage,” Hornbeek said.

The museum manager,  Michaela Slavid, said in an e-mail that they view their position as one of injecting arts into a part of Oklahoma City previously dominated by industry.

“We look forward to immense growth on this side of town in the coming years,” Slavid said.

Michael Bendure, director of communication for the Fred Jones Jr. Museum of Art, said that art museums are important because they display culture and reflect humanity over time and place.

"That responsibility to educate and to allow visitors to create own opinions and feedback is the kind of experience that can only happen in a museum. We take great pride in presenting opportunities for visitors to experience different kinds of culture and artistic differences throughout the year," Bendure said.

The goal of having a museum at 21c is for visitors to be affected by art and perhaps even change their worldview, Bendure said.

The structure from which 21c was remodeled was mostly open, lending itself well to renovation, Hornbeek said.

“For this to be successful, what we want to do is let the structure express itself.” he said.

Another reason the architecture stood out was it’s historic importance, he said.

“I think, arguably, this building was one of the most deserving buildings to be considered for being on the national register of historic places in the state of Oklahoma that wasn’t on the list,” Hornbeek said.

However, once its use had changed from manufacturing to hospitality, the business was easily accepted into the registry.

The hotel is viewed as an extension of the art museum. Slavid said that guests “sleep with art” to foster a different relationship between viewer and art.

“This relationship removes any preconceived notions someone might have about a museum; that it is stuffy, expensive, or that you need to understand art before viewing it.”

21c will host conversations with artists and will offer a film series and panels to incorporate themselves into the current art scene in Oklahoma City, Slavid said.

21c is located at 900 W Main St. in Oklahoma City. The museum and hotel is open 24 hours every day of the week.

Congratulations to David and a great firm.