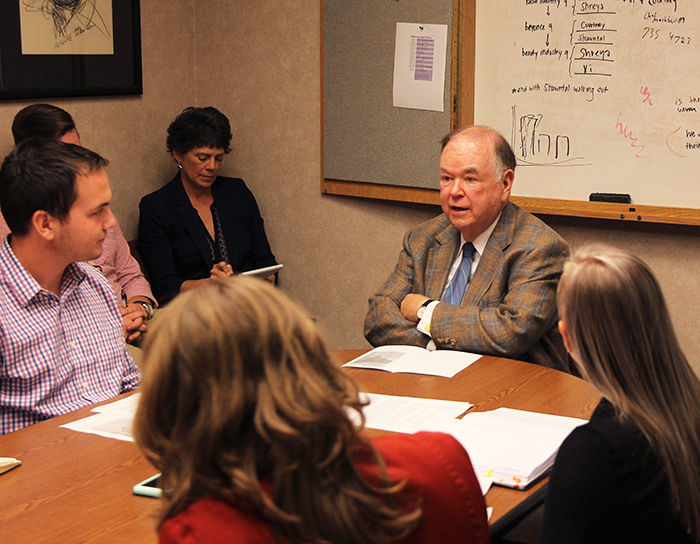 President David Boren presents his penny tax initiative to on Oct. 7 in a meeting with the OU Daily. The proposal would raise the sales tax by one cent and funding would go to public education. 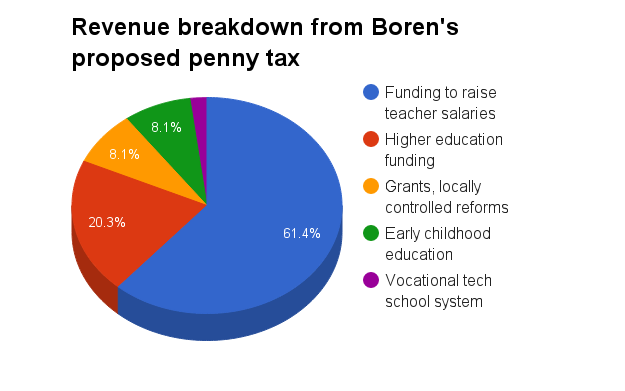 This chart shows how the revenue from OU President David Boren's proposed penny tax would be divided among the Oklahoma education system. The tax would raise a total of $615.5 million per year, based on Boren's breakdown.

OU President David Boren said that if his recently announced penny tax initiative passes in November 2016, he could have the funds to freeze tuition rates.

Boren's penny tax would raise approximately $615 million specifically for Oklahoma education in one year. Of that sum, higher education in Oklahoma would receive $125 million, while the majority of the revenue would be put towards K-12 teacher salary raises.

This money would contribute enough funds to OU to freeze tuition and fees from increasing, Boren said.

"I would say we would freeze them for at least a couple of years, maybe longer depending upon how the budget impact is," Boren said, "But I would say that I could foresee us freezing tuition and fees for at least two years."

Boren's penny tax initiative would add a one cent tax to Oklahoma's existing sales tax through a change to the state constitution. All the revenue from the tax would go directly to education funding, and none would go toward administrative spending.

"Polling data demonstrates that a large majority of likely voters in both parties favor a sales tax," Boren said. The initiative is planned to be bipartisan with elements that both parties can support, Boren said.

"But to be safe, we’re going to try to get 200,000 because people can come in for a month and try to knock signatures off… So you want to try to have some extra signatures," Boren said.

Boren said the general election ballot is the best chance the tax will have to pass.

Read the full letter from Boren below:

Andrew Clark contributed to this report.

As you want minimum cost and maximum tax refund then i would recommend you to outsource your tax preparation services as the expert and qualified staff of tax outsourcing company have their focus on maximizing performance as well as increasing profits while reducing operational expenses.If you take a look at the tax preparation in rehoboth beach you'll find out how easy it can be to trace and pay your taxes.