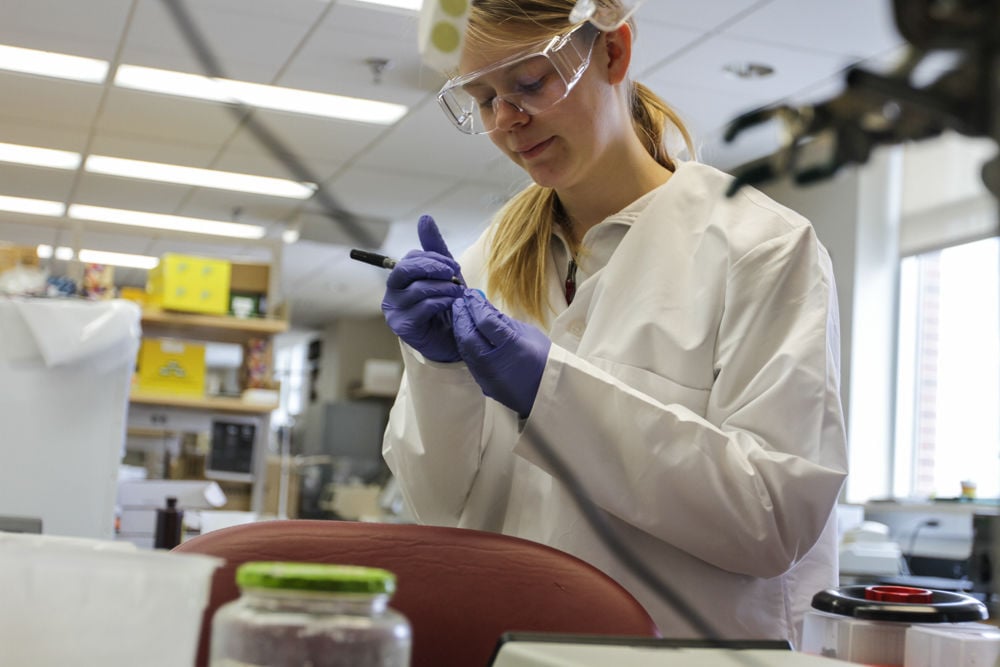 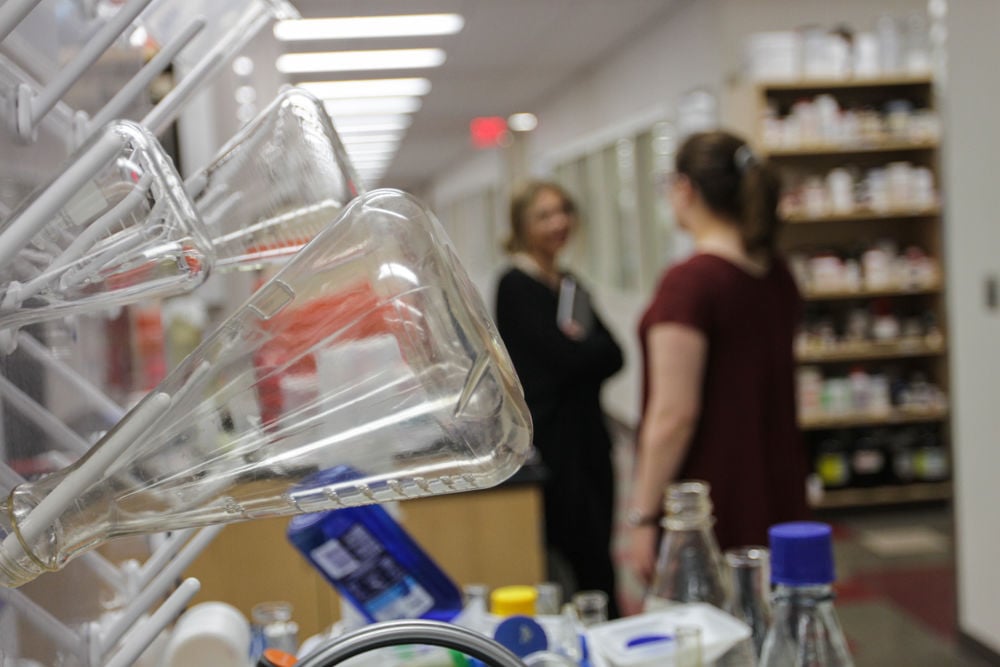 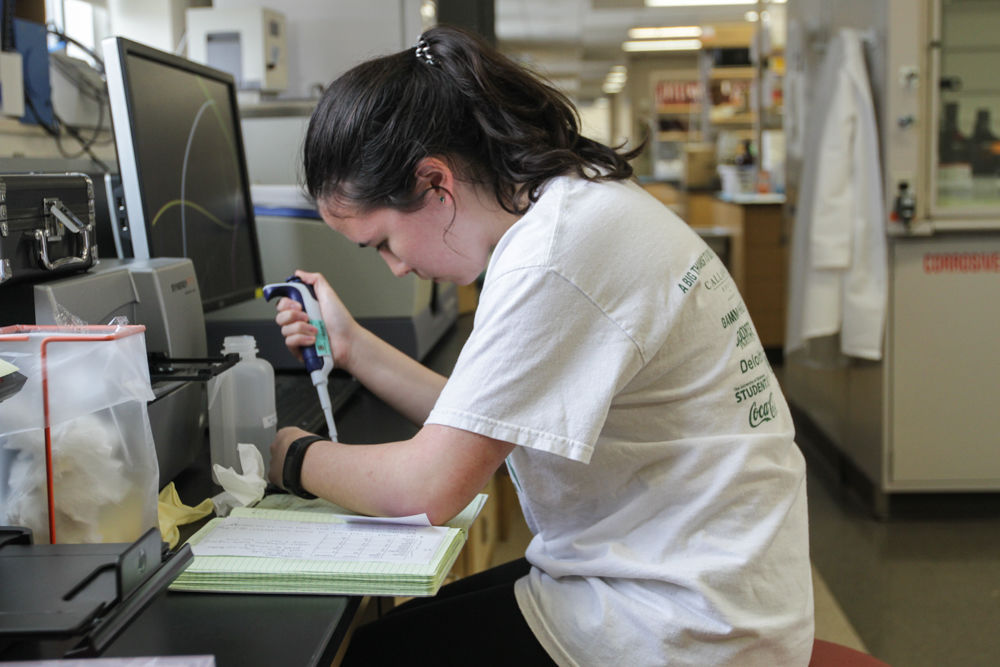 Every afternoon Alexis McCalla puts on her lab coat and protective glasses and begins work in a room full of test tubes and petri dishes.

The biochemistry freshman entered the program this semester and said the experience has showed her how much she loves doing research.

“I knew I had at least wanted to try doing research in my undergrad, but I definitely want to continue doing research, at least during the next four years if not after,” McCalla said.

The FYRE program pairs freshmen students interested in research with a faculty mentor and allows them to start doing research in their chosen field of study, said Rama Kothapalli, director of the program. There are 15 departments involved in the program, including the new additions of health and exercise science, civil engineering and environmental sustainability, she said.

Kothapalli said some departments, like chemistry and biochemistry, place students in actual laboratories while others, like mathematics, involve the student and mentor meeting once a week to do research outside of a lab.

McCalla works in the lab of Ann West, a chemistry and biochemistry faculty member, to study a bacteria known as C. diff, which can cause severe issues like diarrhea and colitis. It is difficult to treat because it is resistant to antibiotics due to certain mechanisms within it, including its ability to create spores that are completely antibiotic resistant, she said.

McCalla has spent the semester studying response regulator 1586, a protein that she explained is essentially part of the bacteria’s nervous system. The goal is to figure out how it contributes to the bacteria’s sporulation process and learn more about its overall structure, McCalla said.

Though some of McCalla’s research attempts have not been completely successful, she has enjoyed her experience and looks forward to many more years of researching. She also said she has enjoyed the more tailored learning found in a lab more than just the “blanket” of knowledge she would be getting in the classroom.

“I have gotten to learn just one very specific area and how that applies very specifically, which has been really cool,” McCalla said.

McCalla has been working closely with a senior researcher in her lab to learn biochemical techniques, West said. The lab consists of about five students and meets together weekly with West to present and discuss their progress.

West said she has been part of the FYRE program since it began in 2011. West said it is an excellent opportunity for students because it starts their lab training early on and ensures they are prepared for any professional school they may pursue after their undergraduate years.

“I can affirm, based on my experience, it’s been a really, really positive and unique program, and I think that the students in the end are the ones who benefit and that’s the goal,” West said.

Biology freshman Elizabeth Jordan said she has had a positive experience through the FYRE program. Jordan has been working in an ecology lab this semester studying the difference between techniques that can be used to test for carbon dioxide and nitrogen in plants.

Jordan said even though the research she’s doing isn’t what she wants to research in the future, the experience has given her new skills to add to her “mental tool belt.” Jordan said she has also learned how to get past the small, dreaded parts of a lab that can sometimes prevent students from doing research.

“It’s all these little things that you have to do, so I feel like it’s a good thing to get into a lab and realize, ‘Okay I don’t love this,’ or ‘I can do this for the rest of my life,’” Jordan said. “For me, I feel like it’s been affirming.”

Jordan has also learned how to communicate better with the people she works with, she said. Her confidence in asking for what she needs from others has grown since being in the lab and she had to overcome some personal barriers to get to that point, she said.

“Getting over that mental block that I’m being bossy by asking for the next thing, not waiting for someone else to tell me what I should be doing,” Jordan said was something she has had to do this semester.

Evan Mettenbrink, biomedical engineering freshman FYRE student, has been in a biochemistry lab for the semester. Mettenbrink’s lab has been looking at what various treatments do to cells and their research can be applied to making drugs to treat cancer cells, he said.

Like Jordan, Mettenbrink said when he first got into the lab, there were obstacles he had to overcome. Part of being a newcomer is learning the ropes and sometimes messing up, he said.

“It’s definitely a learning curve,” Mettenbrink said. “I messed some stuff up, which is kind of embarrassing and you’re kind of like ‘Oh no,’ but they’re really welcoming in thinking a beginner wouldn’t know everything.”

The work all of the FYRE students have been doing this semester will culminate in a poster presentation on May 2, Kothapalli said. They will present their findings at this event to be judged by different professors and awards will be given out, including best poster, best project and outstanding student, she said.

After the students participate in a semester of research, they can enroll in a series of seminar classes that present information on the impact of scientific research on society, how to better communicate their research to others and professional development.

“As an undergrad, I never had the chance to do research,” she said. “The first time I experienced research when I became a masters student, and I realized that I had missed out on a lot of opportunity to advance myself further.”

Jana Hayes is a senior reporter on The Daily's news desk. She is a journalism senior and has worked at The Daily since her freshman year, having held several reporter and editor positions on both the news and enterprise desks.