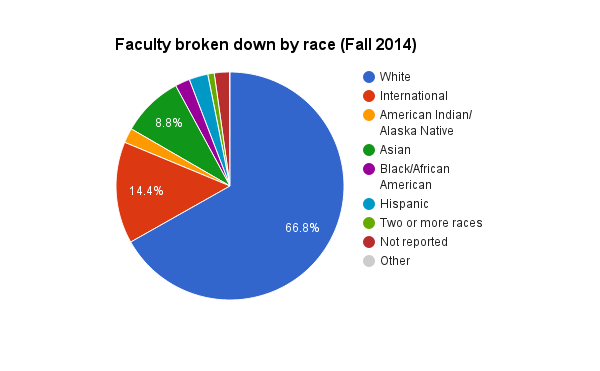 A breakdown of the number of faculty employed at OU as of the fall 2014 semester. 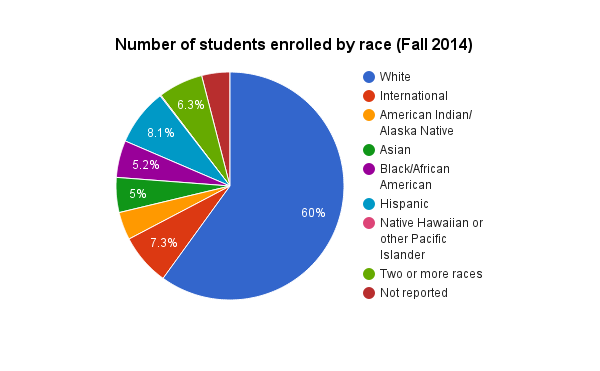 A breakdown of the number of students enrolled at OU in the fall 2014 semester by race.

A breakdown of the number of faculty employed at OU as of the fall 2014 semester.

A breakdown of the number of students enrolled at OU in the fall 2014 semester by race.

Public relations professor Owen Kulemeka is one of those 32. He teaches in the Gaylord College of Journalism and Mass Communication, and — along with professor Meta Carstarphen — he is one of the only black faculty members in the college.

For Kulemeka, the importance of race representation in education faculty is twofold. Diversity in faculty is not only beneficial to students by giving them experience working with and learning from different types of people, but it is also owed to the people who support OU, as it is a public institution funded, even in a small way, by state money, Kulemeka said.

“This university should reflect the people of Oklahoma,” Kulemeka said. “There's a lot of people who pay for this institution who would never get a chance to come in this institution, but we owe it to them to make sure that at least they are reflected.”

For Kulemeka, having a diverse faculty experience is part of ensuring a robust, well-rounded education for students.

“We cannot train the best of the future if they are not interacting with different types of people,” Kulemeka said. “We all bring our different experiences to the table. And we want our students to be exposed to the best knowledge, and the best knowledge comes from a diverse faculty, staff and student body."

The lack of race representation in OU’s faculty was brought into the public eye in February when the student group Unheard formed. In one of its first moves as an organization, Unheard, an alliance of black students, issued a list of grievances regarding diversity and inclusion on campus and began distributing the letter on social media. Topping their list of grievances was the lack of black faculty outside of the African-American Studies department, which the letter stated led to “increased under-representation of marginalized students.”

Chelsea Davis, a health and exercise sciences sophomore who is part of Unheard’s nine-member executive board, said that for her, having more diverse faculty would mean being taught by professors and instructors that can relate to her.

“Sometimes, when you're having conversations, having a relationship and having that understanding as a minority student is helpful; it's heartwarming,” Davis said. “It's just a different experience when you can look at someone who looks like you and can relate to you the injustices and the differences that you're facing in the community. It's a peace of mind.”

Davis said she had never had a professor of color during her time at OU. Rather, her professors have been mostly white men, she said.

“I'm not asking for a card or for a pass or anything like that, but it's easier to have those conversations and that understanding when you understand the type of background that I come from,” Davis said. “It’s easier when someone understands the things that I face in society as opposed to a white, heterosexual man who may not understand those microaggressions and social injustices that we as minority students face on a day-to-day basis.”

Both Davis and Carstarphen, a former director of graduate studies in the Gaylord College of Journalism and Mass Communication, agree that the solution to a more diverse faculty is not simply hiring a few faculty members of color and expecting them to solve the diversity issue. Carstarphen, who is currently on a research sabbatical, was the first and only African-American journalism professor to receive tenure in Gaylord.

“Diversity works best when there is a critical mass of difference within the academic setting. All too often, the academy will hire or engage with 'one' person representing racial diversity and expect that person to carry the weight of racial representation for all,” Carstarphen said in an email. “This is a challenging, and perhaps fearful, proposition for us, but making hard choices to broaden racial diversity is worth pursuing.”

Since making its grievances public, Unheard has met with OU President David Boren and deans from various colleges and held several town hall events for students to discuss issues of diversity and inclusion, including faculty race representation.

In March, OU’s dialogue on race blew up when a video of Sigma Alpha Epsilon fraternity members singing a racist chant surfaced on Twitter. The fraternity was disbanded and kicked off campus almost immediately, and in the days and weeks following the video’s emergence, many different campus groups met to hold discussions and demonstrations on race, unity and inclusivity on campus.

Chemical engineering junior Spencer Davis, another member of Unheard’s executive board, said that the meetings and discussions have led to progress — such as the hiring of Jabar Shumate as the new vice president of the university community — but he emphasized that administrators should be more proactive in making such changes.

“I do believe that we're making progress, but from what I've seen, it's a reaction,” Spencer Davis said. “The buzz has died down about SAE, but I think it's still in people's minds that it did happen at the University of Oklahoma. I would like to make sure that our university does not just hire Jabar Shumate and then settle it down. I think that we should still be making steps, and this is something that we still need to bring to people's attention.”

In spite of a difficult semester for the OU community, Kulemeka pushed students, faculty and staff to see the semester’s events as an opportunity and not a defeat.

This article was corrected on May 2 at 9:48 p.m. to reflect that Meta Carstarphen is a former director of graduate studies in the Gaylord College of Journalism and Mass Communication, not the current director.