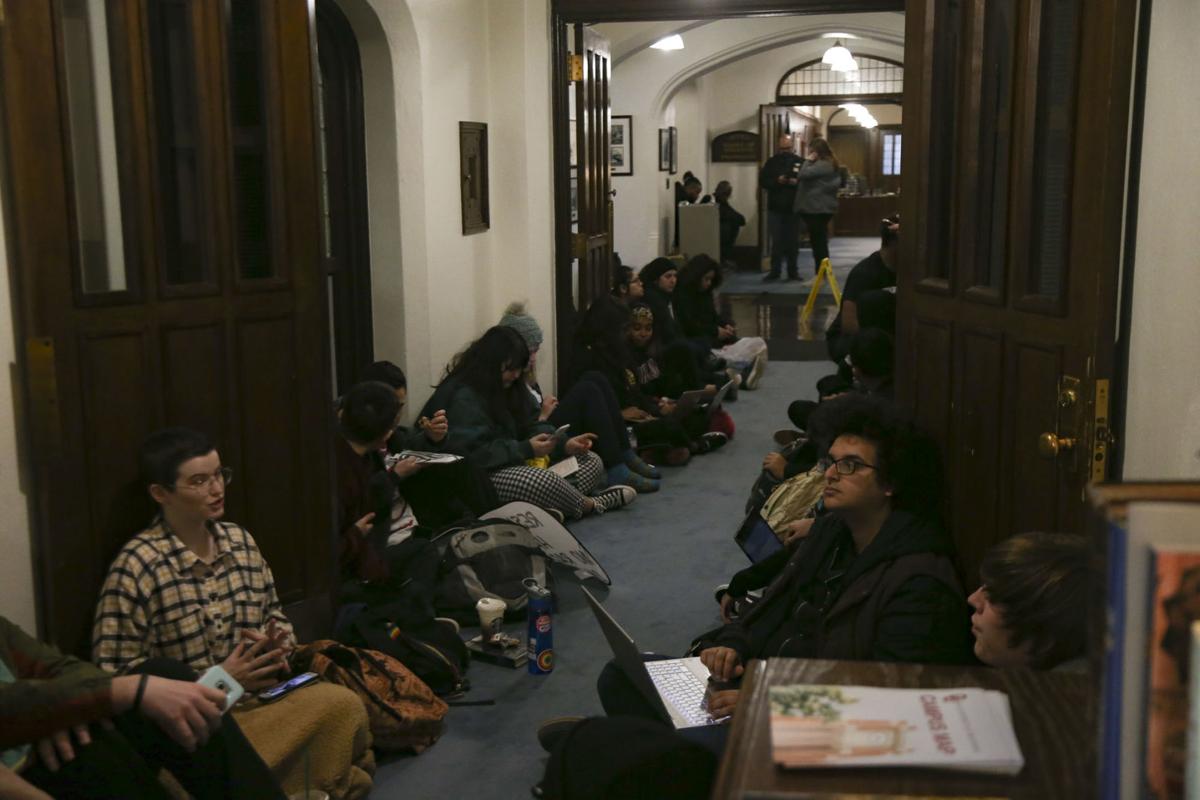 Members of the OU community and the Black Emergency Response Team sit inside Evans Hall during a sit-in on Feb. 26. 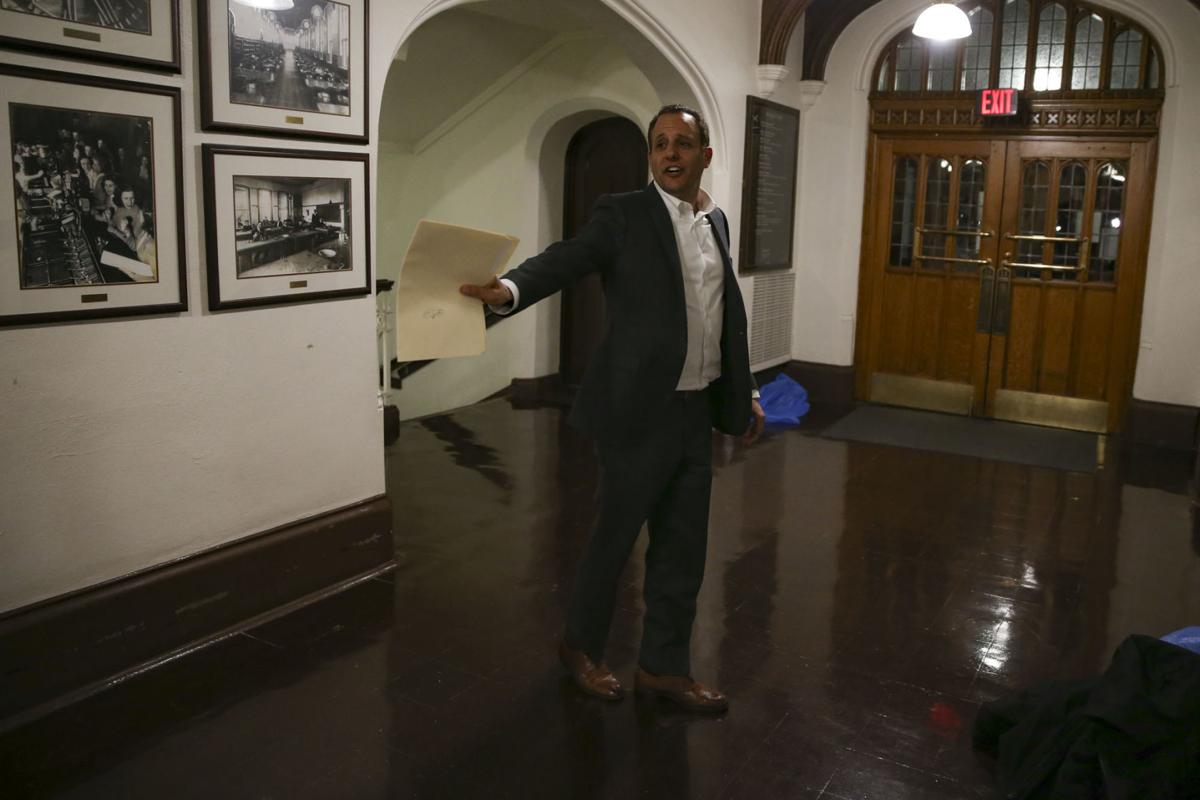 For those who frequent the seat of OU’s administration, it’s a place for policy memos, press releases and power suits. It’s a building that has historically housed the office of the president and provost — two positions that for nearly 130 years at this predominantly white institution have been held by white men and white women.

But by 9 p.m. in the offices of the provost, dozens of students from a blend of backgrounds laughed, sang songs such as Kirk Franklin’s “Melodies from Heaven” and enjoyed one another’s company as they filled plates with Fuzzy’s chips and queso sent into the building by supporters. Steps away, in conference room 103, other students prepared for a late-night showing of “Black Panther.”

Behind the fun and excitement, there was tension. And anger. And weariness. It was how the final hours of a historic day in the life of the University of Oklahoma played out — after years of body blows that have damaged the small-town psyche and national reputation of campus, but more so the spirits of the students who bring it to life.

A protest that had been announced at midnight and had begun at 8 a.m. Wednesday, planned by OU’s Black Emergency Response Team, had swelled from roughly 15 people on the steps when it began to nearly 200 people in Evans Hall at one point. Some demonstrators participated in a hunger strike as part of the protest. They had a list of demands: among them, the creation of a semester-long class focused on diversity, mandatory equity training for OU’s faculty and staff, the opening of a new multicultural center and — most prominently — the resignation of OU Provost Kyle Harper.

The university’s response began tumultuously, with the president out of the state and the provost out of the office. Students hadn’t met with any officials until mid-morning, when the chief diversity officer and the dean of students appeared on the scene.

By 5:30 p.m. the university president had arrived, and leaders of BERT went into an office with OU administrators. An hour and a half later, the students walked out to meet alone in a conference room. Some unspecified demands — but not all — had been met. The frustration on the faces of the leaders was clear. Looks of familiar fatigue spread to the other protesters, but the energy returned almost as quickly as it had gone.

"We plan," said BERT member Destinee Dickson, "to stay until all of our demands are addressed."

Dickson had stood on the steps of the same building 399 days prior, helping to lead a different protest after a different failure while imploring students to rally for change by shouting “BETTER TOGETHER” until it seemed her voice might fail.

But it didn’t then, nor now.

Her announcement that negotiations were closer together, but still somewhat distant, did not dampen the mood. Just before the close of the business day, university administrators had announced that no one would be kicked out of Evans Hall for demonstrating into the night — with a caveat: anyone not already in the building would not be allowed back in after 5 p.m.

As the day turned to night and students moved up and down the stairs of the three floors of Evans Hall and its basement, the mood turned from sit-in to lock-in. Each floor's environment was different from the last.

In the basement, students worked on homework, prepared for midterms and napped in the most quiet space in the building.

The first floor was filled with energy as students laughed, sang, played music from speakers and shouted jokes across the room. A pile of snacks, water bottles and a cookie cake sat on the speckled brown stairs for anyone to access.

On the second floor, which served as an overflow for the first, a buzz of conversation filled the space. Doors to most offices remained closed. Instead, protesters shared the common areas — hallways, foyers and alcoves.

“This means that people are passionate about what we’re doing here,” said Hudia Jamshed, a third-year OU biology student. “This is a whole university, and if we’re going to talk about ‘our family’ or ‘our community’ then we all have to be here for each other, and we all have to be angry about things that are wrong.”

Another attendee echoed that.

“I plan on staying until either I get taken out in handcuffs or if the administration meets our demands before then," said marketing junior Raul Davila. "It's important to me because I really believe in the cause. I believe that our professors and staff, even the higher-ups, don't listen to our needs.”

That sentiment permeated the building. No matter how much homework was discussed in the basement, no matter how many laughs were heard on the first floor, no matter how many soft-spoken conversations occurred on the second and third floors — it all came back to why the students were there: to make change.

Downstairs, in the southeast corner of the building that houses the president’s personal office, those potential changes were discussed behind a closed door. Inside, along with BERT members, three administrators considered how to address the issues, and they themselves represented a departure from the norm of Evans Hall, a building whose exterior is surrounded by statuettes of OU’s prior — and all white — presidents.

But the people in that room were also the son of immigrants from Lebanon, the son of an African-American Air Force serviceman and a South Korean immigrant, and the daughter of a civil rights-activist family from rural Missouri.

Despite having perspectives at the table that hadn’t been there before in OU’s administration, much of the day's drama was focused on Harper: the white, male provost who, as a memo leaked during the day showed, faced questions at his hiring for a perceived potential lack of commitment to diversity on campus. The provost whom the protesters accused of sitting idly by while racism continued to permeate campus. The provost who had not been seen or heard from at any point on Wednesday.

The protesters, in the building and in a hashtag campaign online, made their stance clear: OU can’t grow into the place it needs to be with Harper as its chief academic officer. Dickson, late in the afternoon, said productive conversations had occurred all day long regarding many of the students' demands, but Harper hadn’t been in those conversations with administrators.

Among the other feelings that swelled in Evans Hall was one of anticipation. Administrators and protest leaders were meeting, and one question was on everyone’s mind: “Will we find a resolution?”

This anticipation hung heavy in the air by 10:45 p.m. when the university released a statement:

“We join with OU’s concerned and hurt students, faculty, staff, alumni, and friends, and we echo the need for equal respect for everyone. Our community has experienced incidents in the last two weeks that have certainly caused pain, but more importantly have been reminders of trauma caused by racism and structural issues both past and present.”

The full 190-word statement, signed by Harroz, Surratt and Higgs Hyppolite, called for continued dialogue and recognized the pain recent events had caused — but it did not announce new changes or acquiesce to any of the protesters’ demands.

Minutes later, Harroz walked out of the building. The 25 to 30 remaining students began to settle into small groups and set up makeshift pallets with blankets and pillows. Some talked in quiet tones, some returned to homework, and some went to sleep.

But it was clear to all who would remain: They would still be at Evans Hall in the morning.

Nick Hazelrigg is a political science senior and The Daily's editor-in-chief. Previously he served as The Daily's news managing editor.

This whole protest is a joke, if the administration caves on this it only shows how much of cowards they are. You give people and inch and they try to take a mile.

Racism is NOT the university's fault - they can't control what people do and say. Pretty soon, people will get offended if someone says the sky is blue.... So tired of these whining kids.... [whistling]

I am surprised that students and faculty have any time left over to attend classes, or show up to teach them, given the demands of virtue signaling, censoring "trigger" words, correcting politically unacceptable views, staging demonstrations, demanding sensitivity training, and other activities of the permanently aggrieved class. What must parents think, about the fat bills that pour in for the cost of this so called education?

All icing, and no cake, about sums it up. Today's students (and faculty too) might take a cue from the attitudes and motivations of veterans who returned from WW2 and Korea, eager to take advantage of their benefits under the GI Bill, to get an education. They attended classes, studied diligently, worked hard, and expressed gratitude for the privilege of getting a leg up in the world, by attending a college or university. A far cry from today's overentitled, coddled student body, grousing and griping, eternally vigilant for what they deem socially or politically "offensive" opinions or behavior. One might say that their vision of an education, is almost entirely extracurricular in nature. For those of us who lived through the tormented excesses of Mao's "cultural revolution", with its group shaming, its forced relocations, its re-education camps, all this bizarre behavior in today's universities is eerily familiar. Is this education, or indoctrination? You be the judge.

To deny a generational gap in attitudes toward race is to continue to live in the past. It's as if to say ,"wow, I wish things were like they were 70 years ago." And why act like the most prominent leaders in the Civil Rights movement weren't targeted for assassination by the system they sought to change? This struggle has never ended. In the 80's and 90's true multiculturalism, from the ground up, based on respect and unity rather than forced sensitivity, was beginning to take hold. I think when 9/11 happened the powers that be (as infallible and honest and they can are...) failed to really seize the moment to show we were not going to be like the rest of the world, targeting brown skin tones and ethnic identities for a false security. Enter the disaster capitalists, coaxing us into treating every citizen as equally suspicious in order to track all communications and purchases. Gen X sold out to tech and finance like so many Baby Boomers sold out to politics and universities. Why does the university have such a vacuum when it comes to professors with any grounded sensitivity toward their student body?