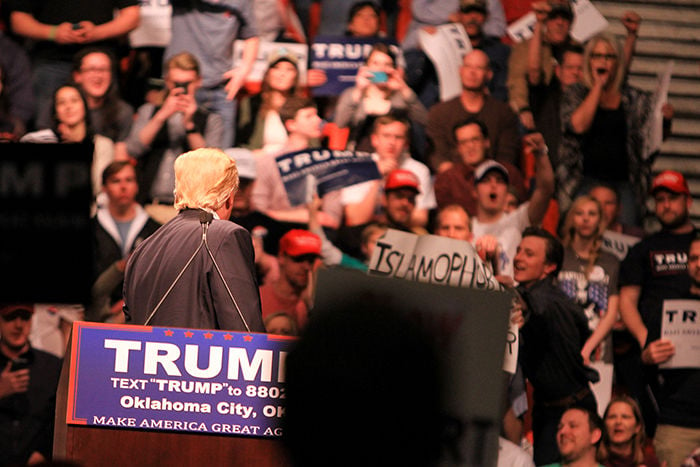 Presidential candidate Donald Trump looks back to see a sign reading "Islamophobioa is not the answer" and a person in the crowd with a shirt reading "KKK endorses Trump" Feb. 26. At least two protestors were escorted out of the convention center. 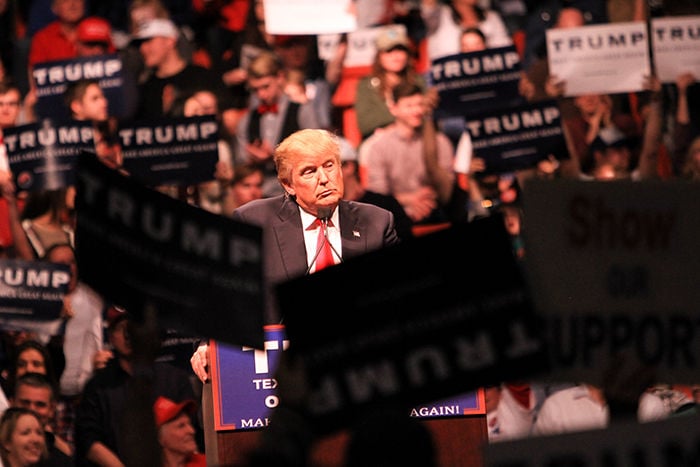 Presidential candidate Donald Trump speaks at his rally at the Cox Convention Center Feb. 26. The next stop on his campaign trail will be in Arkansas.

Presidential candidate Donald Trump looks back to see a sign reading "Islamophobioa is not the answer" and a person in the crowd with a shirt reading "KKK endorses Trump" Feb. 26. At least two protestors were escorted out of the convention center.

Presidential candidate Donald Trump speaks at his rally at the Cox Convention Center Feb. 26. The next stop on his campaign trail will be in Arkansas.

OKLAHOMA CITY — When it comes to first-time voters, Donald Trump is often viewed as more show than anything else.

“I don’t really care about policy, I just want to see him,” said Namir Khaliq, a first-time voter from the Oklahoma City area.

The Republican presidential candidate was in Oklahoma City Friday night for a rally at the Cox Convention Center. Trump, like many other candidates so far, has been making the rounds in Oklahoma ahead of Super Tuesday.

Khaliq said he was excited to see Trump, but if he had to cast a ballot today, he would vote for either Bernie Sanders or Ted Cruz.

Trump’s true supporters were loud and passionate, but they mostly consisted of people well beyond their college years. So where does that leave him in the eyes of the millennial voter?

“I just want to see Trump get hyped and stand up to Rubio,” said Drew Porter, a freshman business student at OU. “Maybe we can make fun of him a little bit.”

Kole Talbott, a freshman at Northern Oklahoma College in Enid, Oklahoma, identified as a Marco Rubio supporter but acknowledged that Trump was an entertaining guy to hear speak.

Talbott also echoed the sentiment of several other young people in the audience of the Cox Convention Center by saying he wanted to learn more about how Trump will actually accomplish the things he says he will.

“What he says is very general, there’s no meat and potatoes to it… It’s not anything you can get behind,” said Nathan Thayler, a junior at Oklahoma City University.

While some were actually interested in the specifics of what “The Donald” had to say, most of the younger people in attendance were truly just there for a show.

Travis Ray, a university college freshman at OU, laughed and said he wanted to hear about Trump’s wall.

Brandon Ellis, a student from Oklahoma State University, drove to Oklahoma City to show his support for Marco Rubio, but decided to stop by the convention center to “get some good laughs in.”

Thayler admitted he was just interested to see if Trump really acted how he does on TV and said that Trump did not disappoint.

In fact, Trump may not care that the younger demographic doesn’t take him seriously. He pointed out countless times during his nearly hour-long speech that he is “sweeping the polls” with all voters and spent more time talking about his disdain for televised debates than his education policy, which is undoubtedly one of the biggest issues for young voters today.

Education policy is what has made Democratic candidate Bernie Sanders so popular amongst first-time voters, and Trump spent little time on it during his speech. He said he would “get rid of Common Core,” talked about America’s standing in relation to other countries in terms of educational levels and then returned to attacking other Republican candidates.

There were also young people in attendance who were openly anti-Trump. One man sitting behind the stage was escorted out of the convention center for standing in the aisle wearing a shirt with "KKK endorses Trump" written on it. Another group of young men attempted to open up a banner in the stands facing Trump, but were asked to leave before they could open it.

“I’m a Bernie Sanders supporter, and I just came here out of morbid curiosity if nothing else," said Jordon Yates, a freshman at OCU. "For me, I came to see if I would disagree with him even less and that just wasn’t the case. He’s just very ignorant.”

Even though young people in attendance were not impressed substantively with Trump, the turnout for the rally was enormous. Estimates of close to 7,000 people filled the Convention Center, most of them adults or families, and Trump stayed long after to sign autographs and take pictures with his supporters.

Nataliegh Lewis, a 13-year-old from Bethany, Oklahoma, was crying tears of joy after the rally when she was finally able to get her poster signed by Trump.

“He is like my father, I just love him so much,” Lewis said.

Derek Peterson is a journalism senior and sports reporter for the Daily.