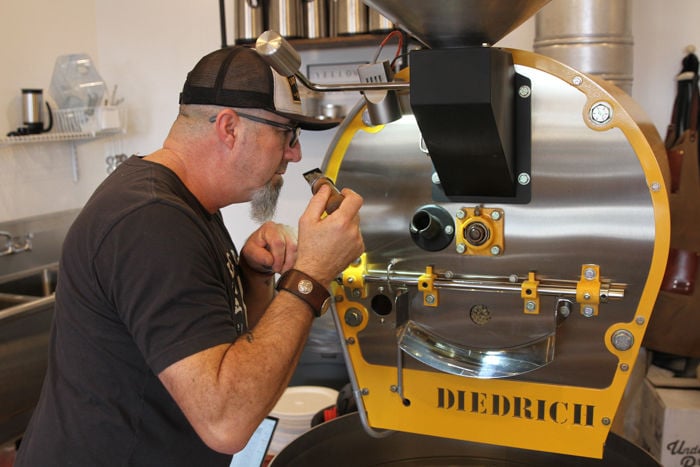 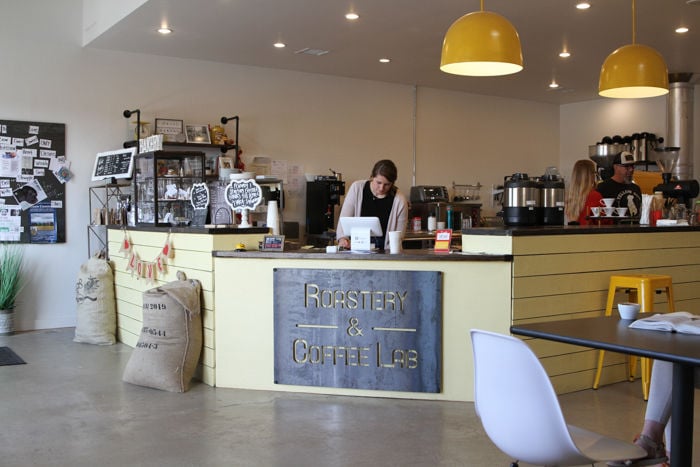 The front counter at Yellow Dog Coffee on Feb. 3.

The front counter at Yellow Dog Coffee on Feb. 3.

On Monday mornings, Rob Wilson dumps 20 pounds of green coffee beans into a sunshine yellow roaster almost as tall as he is. As they heat, the beans turn fluorescent yellow, then cinnamon brown, finally releasing energy with a pop at 400 degrees.

The next few seconds after “first crack” are vital — they determine if the batch will be a blonde, medium or dark roast, and how the final product will taste. It’s this experimentation and creativity that makes Wilson passionate about what he does.

“I like referring to it as a ‘coffee lab’ because I experiment constantly with different blends of coffee in different roast levels … I'm really geeked out on the process of roasting” Wilson said.

Rob and his wife Sereta own Yellow Dog Coffee Company, currently the only coffee shop in Norman with beans roasted in-house. Before opening the shop in fall 2019, Wilson roasted coffee beans in his two-car garage in the country.

In pre-pandemic times, Yellow Dog shared its airy, brightly-lit space with the owner of Okie Baking Co., who used the kitchen to bake fresh cookies sold in the shop. The repurposed office building by the railroad tracks only has four parking spots, but Wilson made it work, offering 10 percent discounts to customers who parked elsewhere or biked up.

Now, though, things have changed a bit. For the time being, Yellow Dog is simply a roastery that delivers coffee beans, cold brew and merchandise locally for free. Wilson also offers a subscription service and delivers in glass mason jars, which customers can place outside to be picked up when empty, he said.

“(I am) like the milkman of coffee,” Wilson said.

Orders have gone up by at least 60 percent since social distancing measures took effect, Wilson said.

“People are actually still wanting to support local and people need their coffee still,” he said. “You know, it's the second most-traded commodity in the world besides oil.”

Inside the shop, Annie — the Wilsons’ yellow lab who passed away last year — is memorialized in a picture on the coffee bar. The coffee shop, as well as the Wilsons’ dog daycare and boarding studio Annie’s Ruff House, is named after her.

Twelve percent of profits from Yellow Dog go to a dog rescue attached to the dog daycare. The rescue began when a lost dog appeared on the doorstep of Annie’s Ruff House. It has since spayed, neutered and placed around 400 dogs in homes — as well as several cats, pigs, goats, ducks and chickens, according to its webpage.

“People would find a lost dog or something and bring it to us … they didn't know what else to do with it,” Wilson said. “For the first five years, we paid everything out of our own pocket.”

“Everything I buy for this business, except for my cups — and I wish there was a local supplier for that — is all local,” Wilson said. “Scones, even my stickers, everything from shirts to hats, are all printed here in Norman.”

Although the Wilsons had their sights set on opening a coffee shop for a long time, the plan didn’t always include a roastery, Wilson said. But as he did research, he realized he wanted to be in control of what type of coffee was roasted.

So Wilson began taking roasting classes and attending coffee seminars, where he “fell in love” with the process, he said.

Wilson also became interested in different varieties of coffee beans. Because of this passion, he regularly brings in coffee beans from all over the world to give customers the opportunity to try something new.

Although Norman has its fair share of coffee shops, Yellow Dog has drawn a devoted customer base. Its Facebook reviews are populated by customers who weren’t always into coffee, but were converted by Wilson’s roasts.

Phillip Anneler said he discovered Yellow Dog when he was setting up a farmer’s market booth and looking for products to include that were made in Oklahoma. When he decided to feature Yellow Dog coffee, Wilson included some sample bags for Anneler to try.

“I normally don't drink coffee, but I love his,” Anneler said. “I couldn't get enough of it. All the different flavors he has.”

The Wilsons chose not to reopen Yellow Dog’s lobby on May 1 when many other businesses in Norman opened, but the coffee shop is currently conducting coffee giveaways on the its Facebook to encourage community engagement. The shop will begin providing curbside pickup on May 18, according to a Facebook post.

Molly Kruse is a journalism senior and assistant culture editor at the Daily. She previously worked as culture reporter, copyeditor and social media coordinator.