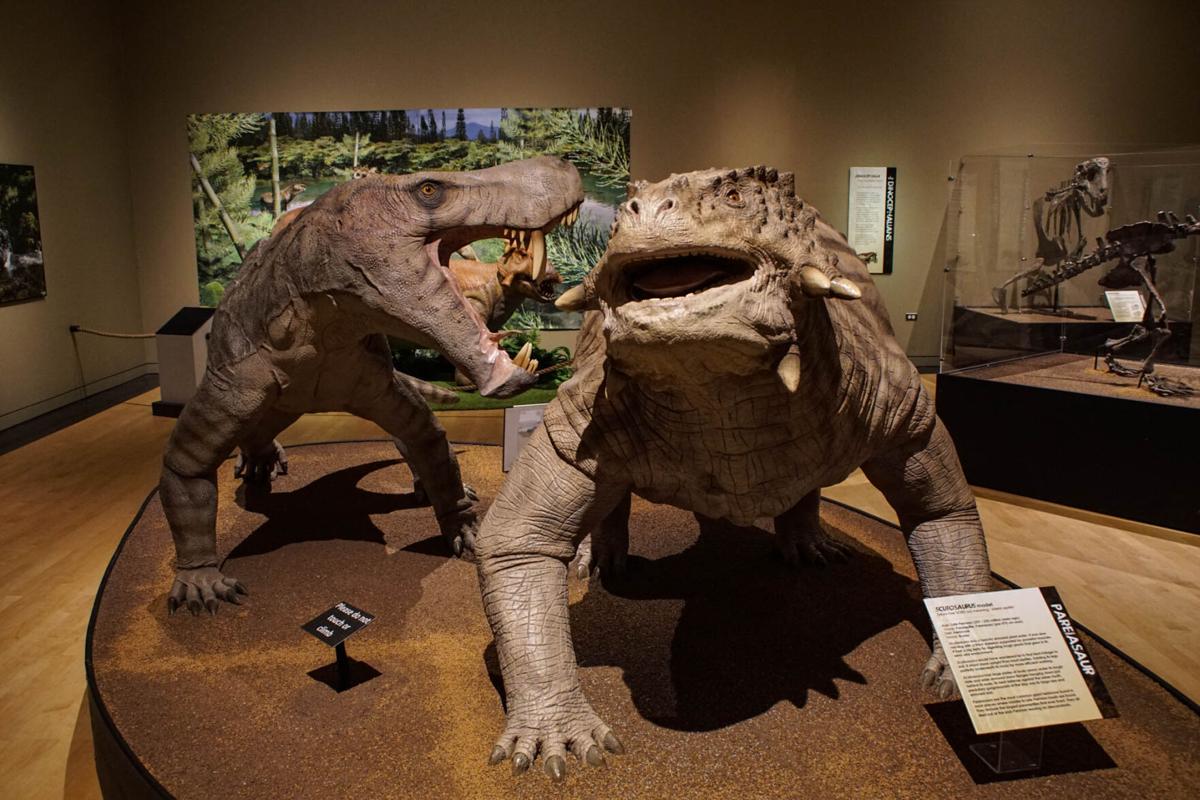 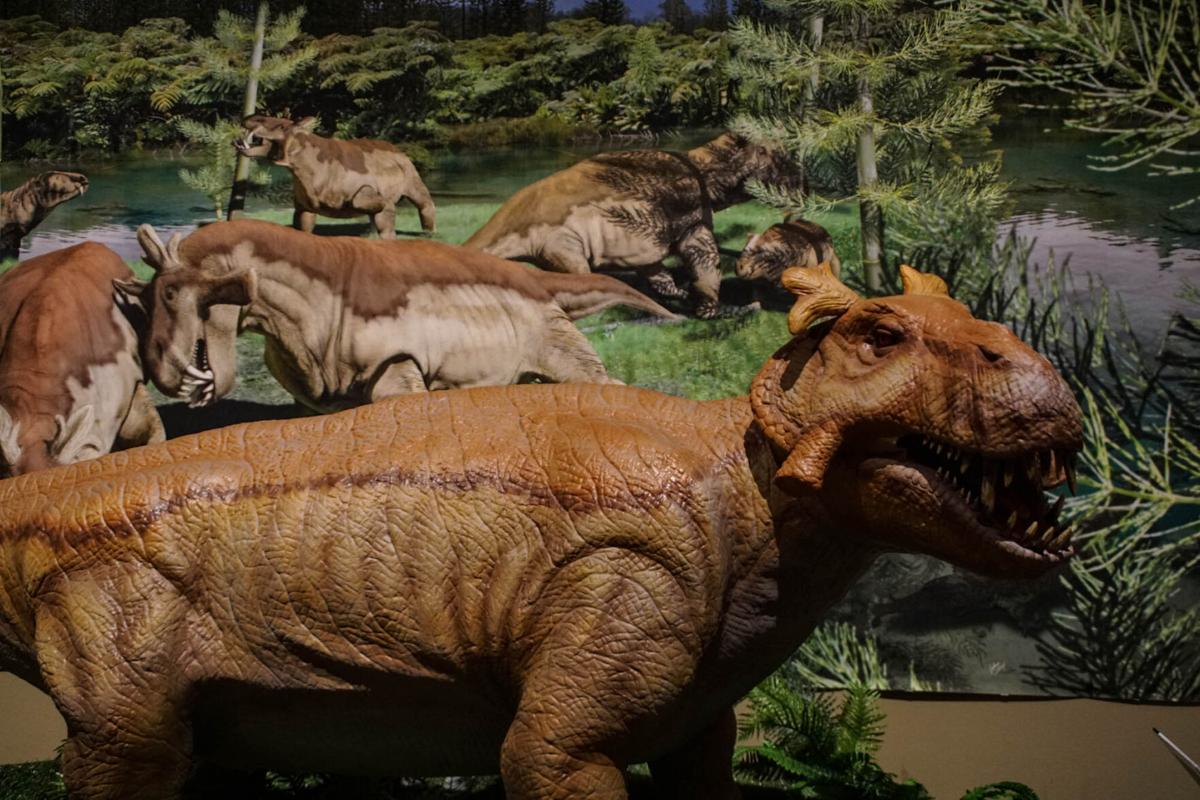 An animatronic creature in the Sam Noble Museum Aug. 31. 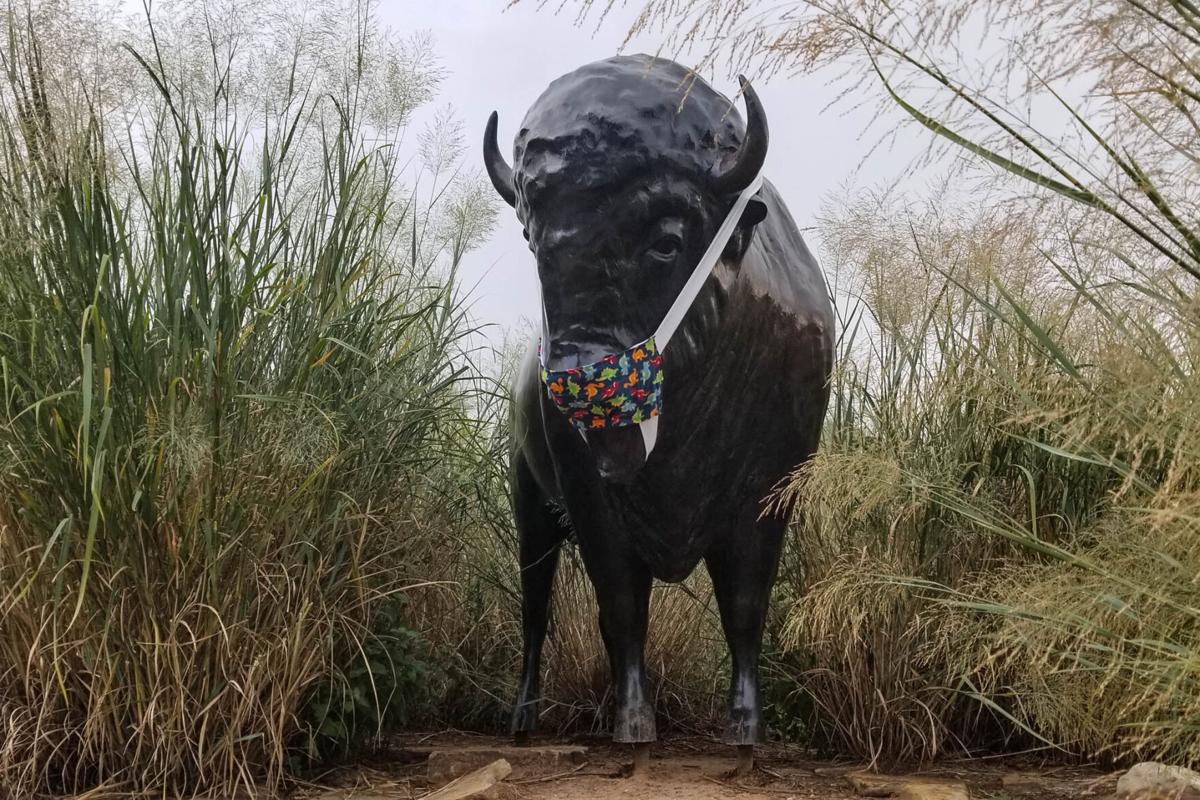 A bison statue wearing a face mask outside the Sam Noble Museum Aug. 31.

The statue of a buffalo outside the Sam Noble Museum of Natural History sports a face mask over its mouth. Until recently, the museum’s collections of dinosaur skeletons and ancient specimens hadn’t seen visitors since March.

In the wake of a disruptive and inconvenient closure, the museum has reopened its doors to the general public with modified ticket reservation policies and safety precautions — and a new traveling exhibit.

Head Curator and Associate Director Richard Lupia said closing during the spring and summer due to COVID-19 complicated far more than patrons visiting the museum.

Spring break and summer vacation are busy times for the museum, so losing those patrons was disheartening, Lupia said. Behind the scenes, plans for various research efforts by museum staff across departments were largely halted.

“Summertime is a big field season time for us. When we're not teaching, we're able to go into the field,” Lupia said. “Some of our curators were planning to go to Alaska, planning to go to Saudi Arabia, to the Philippines. And that all just stopped.”

All guests must reserve the tickets ahead of time online or over the phone, and guests ages 3 and up must wear masks in the museum, according to the website.

Despite the setbacks from COVID-19, the museum’s newest traveling exhibit — “Permian Monsters” — opened along with the museum in August. The exhibit will run through Nov. 8, according to the museum’s website.

The exhibit features fossils and moving animatronic recreations of these “monsters” which originate from the Permian period, which began 290 million years ago, according to the exhibit.

“I think (visitors) are gonna learn about a whole new world of ancient life ... and all these really far-out looking animals,” Cifelli said.

Most of the fossils that come from the later Permian featured in the exhibit originate from Russia and South Africa, Cifelli said. But some fossils from the early Permian originate from Oklahoma, said vertebrate paleontology museum preparator Kyle Davies.

“One of the neat things with the Permian is with the exception of the few animals out of it, most people are not familiar with the animals that occur in that time period,” Davies said. “It’s sort of a thing that doesn't get covered very well in the books on prehistoric animals.”

The exhibit features a variety of unique animals, such as the gorgonopsid — a predator with large canines similar to the saber-toothed tiger, Davies said.

“It’s a wonderful example of how much more diversity to life there is than you might expect at first glance,” Davies said. “There’s really a lot going on in the history of life. And it may sound funny, but it pays to know your history — even if it's ancient.”

During the museum’s closure in the spring, undergraduate and graduate students who utilized the museum for classes and research were unable to use the space when classes were moved online, Lupia said.

“We have a teaching lab in the museum. ... We bring down specimens and (students) interact physically with specimens from the museum itself,” Lupia said. “Transitioning back to virtual spaces is obviously very different.”

Lupia said the lack of students in the museum was a loss because of the energy and questions they bring to the work.

“All of that just sort of disappeared,” Lupia said. “And so it was a tremendous interruption to the normal cycle of things.”

Lupia said that despite many research projects being uprooted by COVID-19, efforts to continue digitizing the museum’s physical collections had already been in the works. Initiatives from the National Science Foundation and the Institute of Museums and Library Services have supported these efforts at the museum for several years.

One of these National Science Foundation initiatives — the Advancing Digitization of Biodiversity Collections — has pushed for the publishing photos and data of museum specimens long before COVID-19, Lupia said.

Much of the staff’s usual curation work was shifted to mostly at-home, Lupia said. But progress was still made in getting the museum collections accurately digitized.

“The hope is for many of those things to then transition to a public side, either through a phone interface or a tablet interface, so people can go through and interact with objects online,” Lupia said.

The museum’s mission to educate and create accessibility to its collections hasn’t changed since COVID-19 entered the picture, Lupia said. But the pandemic has prompted the museum to alter how they accomplish this mission and explore possibilities that hadn’t been considered before.

“A lot of things that we wanted to do ... we didn't have the time or the impetus,” Lupia said. “Now we have certainly a lot of time and a lot of impetus to make these things successful in new ways.”

Abby Tow is a social work and women and gender studies double major and the current assistant culture editor.