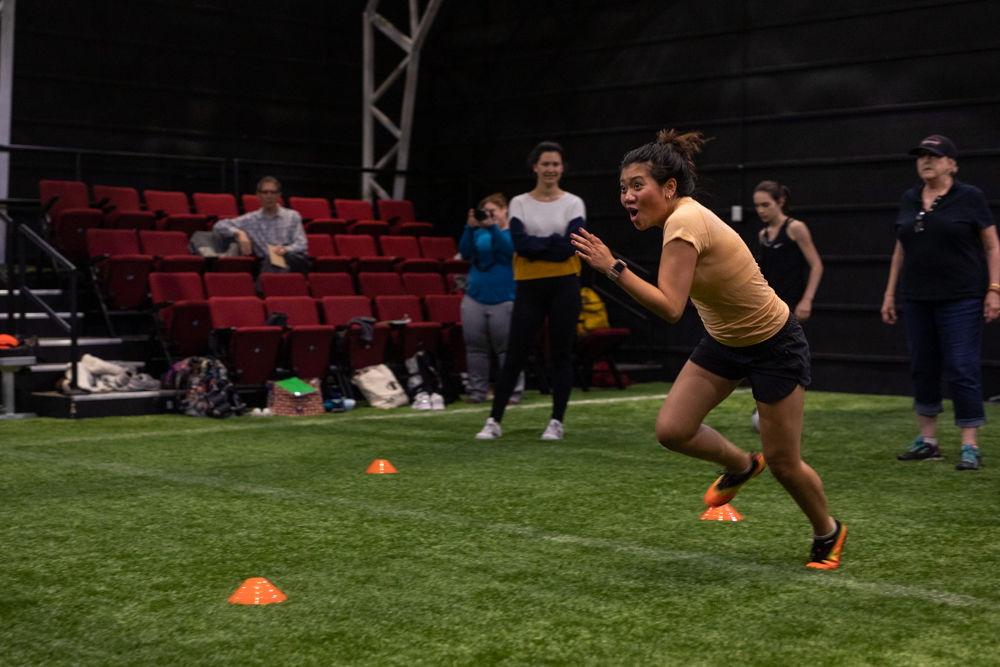 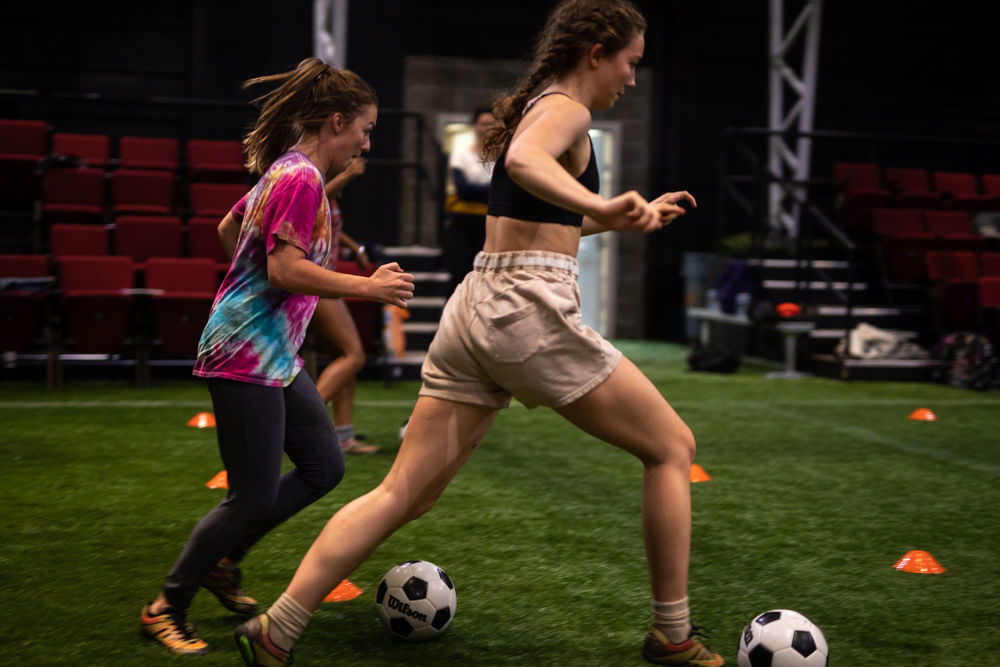 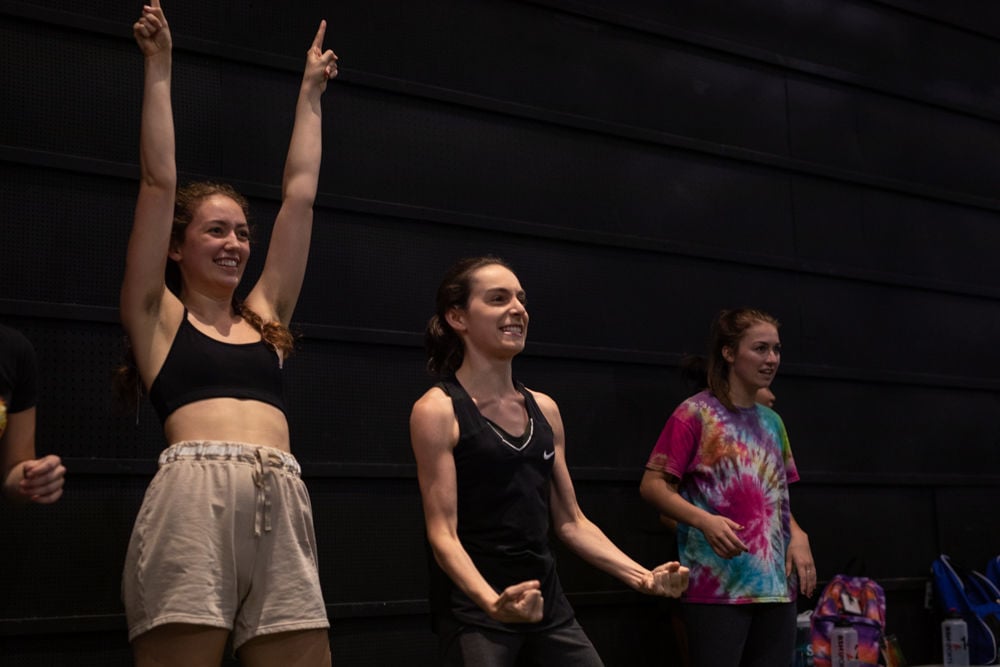 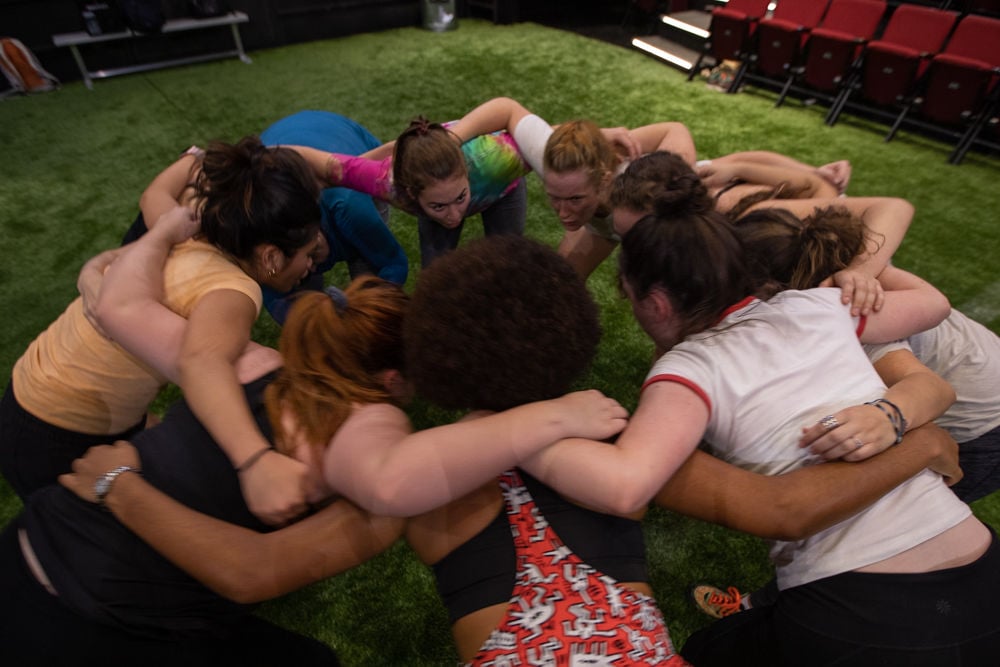 Sixteen small cones form a grid on the astroturf covering the floor of the Weitzenhoffer black box theater.

“Keep your head up,” a cast member yells in a sea of shouting. “Nine days until opening.”

The cast of “The Wolves,” University Theatre’s upcoming production, spends the first half of their rehearsal running soccer drills instead of lines. Only three sounds can be heard in the room: the kicking of soccer balls, labored breathing and actresses screaming words of encouragement to their teammates.

This award winning and Pulitzer Prize-nominated play was written in 2016 by playwright Sarah DeLappe. From 2018-2019, “The Wolves” was one of the most produced plays, according to American Theatre, a national theater magazine.

The OU production is directed by Judith Pender, a Weitzenhoffer endowed professor of performance and directing and the college’s performance area coordinator.

The show offers audiences a glimpse into the lives of nine female soccer players as they practice before games. The characters, known to each other by the numbers on their jerseys, discuss everything from tampons to global political conflict through the perspective of contemporary teenagers.

Unlike other productions, which only require experience in acting, “The Wolves” calls for skill in both acting and soccer due to the physically demanding nature of the show.

“Basically we’ve been training for three hours every day for a month now,” said Alexandra Swanbeck, an acting junior. “Emma has been teaching us so much and putting us through so many drills. We even had a scrimmage soccer game during one of our first weeks of rehearsal on the North Oval.”

The cast of “The Wolves” also observed OU’s soccer team practice before a game.

“Going into the process, I was like, 'Some of the lines sound a little cheesy,' or 'I wouldn't say that in a soccer practice,'” Santamaria said. “But as I watched them scream at each other and give each other high fives, I quickly figured out I was wrong.”

Pender said the group bonded quickly. In just a few short weeks, the cast became proficient in soccer techniques and a true team.

“I've never been in a sorority, but you know, it's that kind of closeness that you develop with a group of women,” Pender said.

Pender said such a group of women is, in most cases, underrepresented as audiences don’t often see shows about a group of teenage girls. Having an all-female cast allowed OU actresses to present audiences with an illustration of genuine womanhood.

“I think having an all-female cast gives a really unique opportunity to not just the actresses involved, but also the audiences,” said Lucy Dismore, an acting and dramaturgy sophomore and #11 in the play. “They get a chance to see women on stage being strong, angry, mean, scared and powerful in a way that I don't think you get to see a lot on stage.”

“The Wolves” seeks to explore the qualities of individualistic, adolescent females who just happen to be friends. Through this text, OU’s all-female cast explores and portrays the complexities of unique female characters.

“Our playwright did such a good job of creating all-female roles that aren't defined by their male counterparts or as love interests,” Swanbeck said. “We've had so many rehearsals where we just ended up talking for a full hour about all our different characters. All the girls are so different and so individualistic and so unique and so deep and thought out.”

Swanbeck related to her character personally, as both of them experienced what it was like to be an outsider as “the new kid”.

“I grew up in Singapore and Nigeria and Australia for the majority of my life and didn't move to the states, and I was like 15,” Swanbeck said. “#46 is 16 when she moves to Nevada ... so I really connected with her.”

“The Wolves” also provides actresses with experience in playing characters close to their actual age.

“We are often asked to play ages that are a little bit older,” said Alexis Pudvan, an acting senior and #2 in the play. “When we graduate, a lot of times, we have training which is very valuable ... but we get into the professional world having played not a lot of characters that we're going to immediately be cast as at the age of 21.”

The cast said they valued this career-building opportunity to play complex and developed young women.

“It's rare to find such well-written, complex, young, female characters that a lot of us will be playing in our early careers,” Pudvan said. “Both technically and professionally, it's an exciting opportunity to work on something more like what we will be working on when we graduate.”

To Pender, watching these actresses grow and become the women they were meant to be is the most rewarding part of the process.

"I spent four years with these young women, and to see and be a part of their journey and ... see how they have grown and learned is so rewarding,” Pender said. “They have come so far since we started just a few short weeks ago.”

Tickets range from $20 to $25 and are available online, by phone and at the box office. Discounted tickets are available for students and faculty for $10.

Jillian Taylor is a journalism freshman and culture reporter at The Daily.