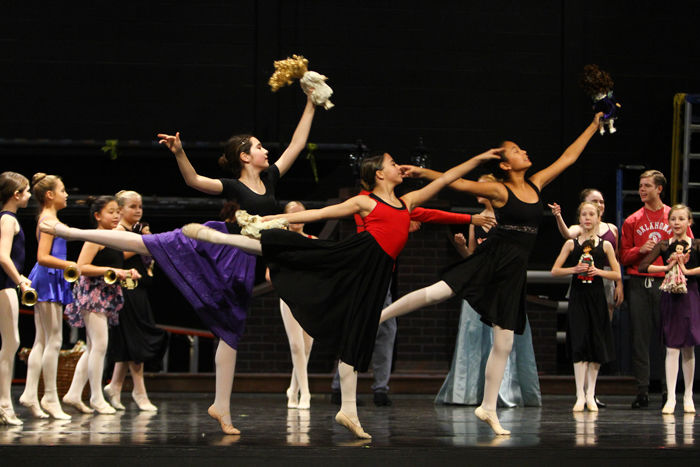 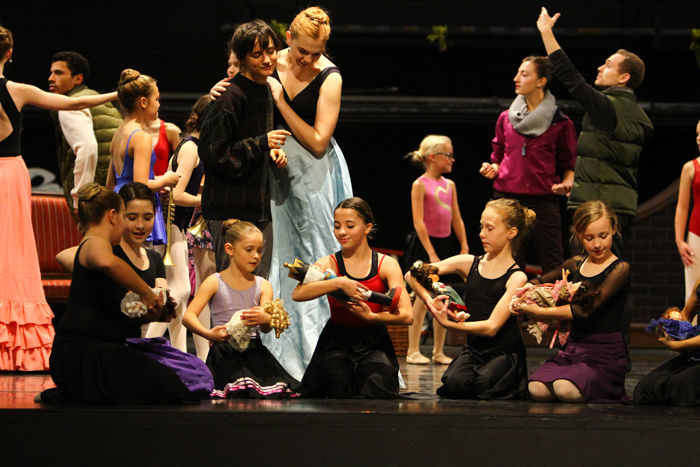 Children dancers perform with their toys during the Nutcracker Nov. 14.

Children dancers perform with their toys during the Nutcracker Nov. 14.

Instrumental music swells in the Elsie C. Brackett Theatre as snow-covered trees descend from the top of the stage. In a matter of minutes, OU’s cast of “The Nutcracker” transform into fantastical characters.

OU’s production of “The Nutcracker” ushers in the season by transporting audiences back in time to 19th-century Germany.

Directed by Michael Bearden, director of OU’s School of Dance, this performance will celebrate the 75th anniversary of Willam Christensen’s 1944 version, which is the first American adaptation of the ballet, according to the Ballet West’s website.

The ballet follows the story of a young girl named Clara who is given a nutcracker by a toymaker named Dr. Drosselmeyer at her family’s holiday party. Upon falling asleep after the party, Clara enters a dream sequence featuring a living version of her nutcracker in a land overrun by mice and their rat king, Bearden said.

OU’s production of “The Nutcracker” has allowed Bearden to direct a unique performance by casting dancers from outside the OU School of Dance to fulfill some of the male and youth roles, which is rare for the college's productions, he said.

The addition of outside dancers to the cast has been special, said Elena Damiani, a ballet performance senior who plays the Snow Queen, the Spanish Lead, the Lead Mirliton and a dancer in the Waltz of the Flowers.

“In this production, we have two of our faculty members, an OU alum and kids from the Norman and OKC community performing with us,” Damiani said. “They have helped us fill in some of the roles and celebrate our community.”

Bearden said the outside dancers have been extremely helpful because, without them, he wouldn't have had the resources necessary to fill each role. He said it’s rewarding to watch his cast be pushed both technically and artistically.

“Most of the steps in ‘The Nutcracker’ are not easy,” Bearden said. “It's been neat to see these dancers struggle and conquer all of the difficult steps and to be able to give them some insight through the process.”

Despite the technical and physical demands of the ballet, cast members are expected to play multiple roles throughout the show. Justin Rainey, a ballet pedagogy senior who plays the Grandfather, Snow King and Arabian Lead, said it can be challenging, but he is glad the show was cast this way.

“Having different roles is a different experience, as you get to learn more by embodying different things and doing different steps,” Rainey said. “I love being able to take my mind different places, whereas if you're doing the same role and you're stuck in that mindset.”

Regardless of its 75-year history, Bearden said this version of “The Nutcracker” is still evolving.

“Artistically, through this production, I have learned just how adaptable to different sizes, stages and environments this production is,” Bearden said. “It's been nice to see this flexibility because, ultimately, it's about the spirit of the production and the growth our students experience.”

This versatility has shown true in a recent casting change. Emmy Wildermuth, a modern dance performance and professional writing junior, is filling in for one of her male castmates in the traditionally male role of the Chinese Lead. Bearden said this will be one of the first times in 75 years of the production that a woman has played this role.

“In 2019, as women's place in our culture is hopefully changing and evolving, we decided by having a woman play this role, we could continue to pioneer in a show that was pioneering in its beginnings,” Bearden said.

In her ballet classes, Wildermuth has always challenged herself by dancing with both the women and men dancers. She said this opportunity has helped her continue to push herself and show strength in ways she wouldn’t have been able to in her original roles.

“I think that as a female dancer, you should be able to do everything and recognize that there's beauty in more things than just grace and melody,” Wildermuth said. “I believe all forms of beauty, ballet and dance are valid, but playing this very strong role has showed me that strength can also be beautiful.”

Ultimately, Bearden said he hopes OU’s production allows audiences to feel like they are getting a look into something special as they watch the version that started it all.

“Whether you dance professionally or not, so many young girls and boys are going to dance in this production or go see it, and it all started because of this version that we're doing,” Bearden said. “It’s really cool that our dancers and audience gets to be a part of a production that inspired part of our cultural fabric regarding the holidays.”

Tickets range from $20 to $25 and are available online, by phone and at the OU Fine Arts Box Office. Discounted tickets are available for students and faculty for $10.

Jillian Taylor is a journalism freshman and culture reporter at The Daily.

Huli mascot is the No. 1 way of love, this Gemstones An An would introduce across something about feng shui Đá hồ ly slightly. Đá hồ ly which helps sexually smoothly charming older, singles soon found one half, who had then been tighten love. Wearing fox spiritual experience that employers need most for his spiritual name and call it daily intimate, with then new feng shui Đá hồ ly sacred.