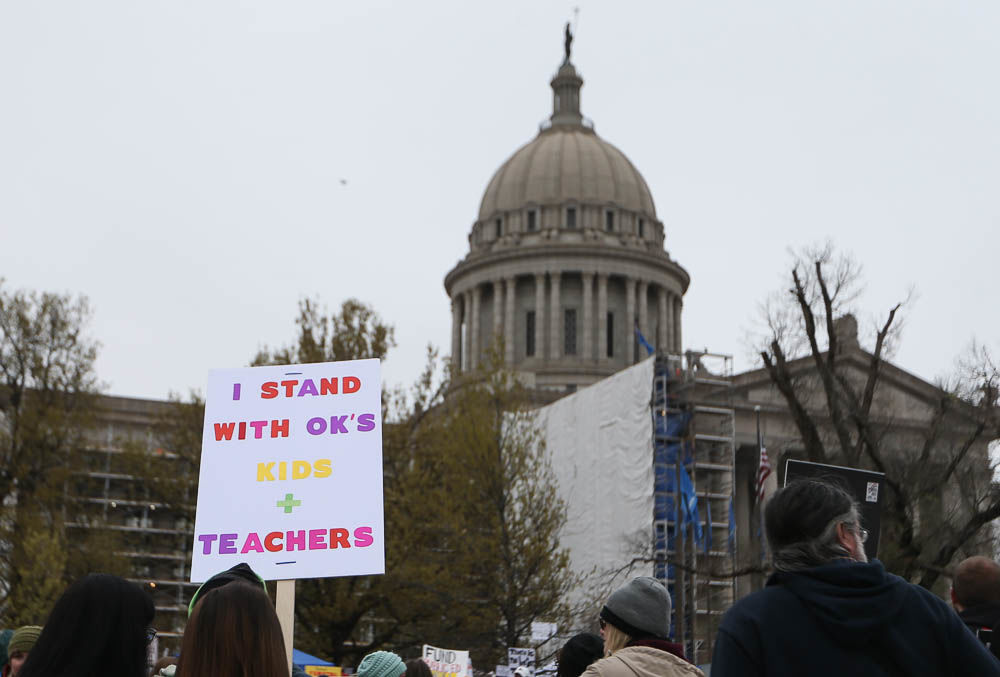 A sign is held up during a picket walk at the teacher walkout April 2. 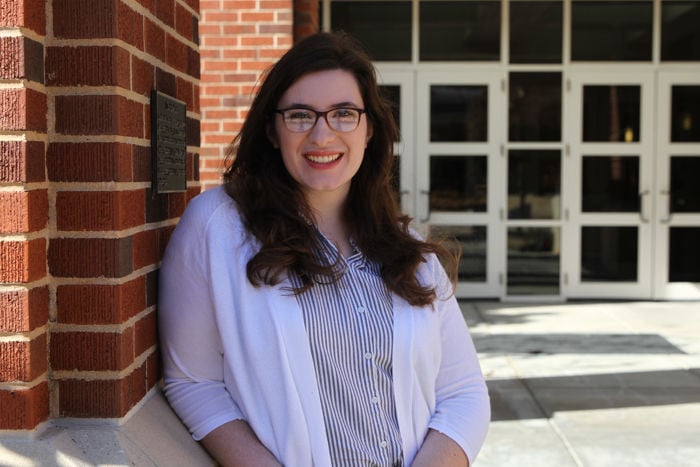 Miranda Koutahi, an education major, stands outside Collings Hall for a photo Nov. 15.

A sign is held up during a picket walk at the teacher walkout April 2.

Miranda Koutahi, an education major, stands outside Collings Hall for a photo Nov. 15.

On a Friday morning during the April 2018 Oklahoma teacher strike, OU student Miranda Koutahi woke up at 6:30 a.m., made a sign that read, “Classics Teacher for Modern Education Funding” and parked in the only remaining available spot half a mile from the crowded state Capitol in Oklahoma City.

“I think we were all really excited at first to see what would happen and were disappointed with the results,” Koutahi said.

Koutahi, a Latin education and elementary education senior, plans to teach in Oklahoma when she graduates from OU. Her student debt, like many education majors at OU, will be forgiven by the Lew Wentz Debt Free Teacher Initiative, so long as she commits to teaching in Oklahoma.

“My dad joked about being disappointed that I became a teacher. He was like, ‘I want you to not have to worry about the same things that I worry about,’” Koutahi said.

The lack of financial support from the state for classroom supplies like books and curriculum strains teachers, but students also lack the support staff and adequate classroom size they need to succeed.

“In education, we call them wraparound services: the social worker, the nurse, the counselor, that could work with them on their specific needs,” Priest said.

The current minimum annual salary for teachers in Oklahoma with a bachelor’s degree is $36,601, according to Oklahoma Watch.

Since the walkout, classroom funding in Oklahoma increased by $125 million, and the average teacher pay increased by $7,000, Priest said. In Norman, teacher salaries were increased by an average of $2,044, said Brenda Burkett, chief financial officer for Norman Board of Education.

Kara Stoltenberg, an English teacher at Norman High School who graduated from OU in 2013, also went on strike during the walkout.

“When we were at the Capitol talking to the legislators ... I didn't get the sense that they viewed us as professionals,” Stoltenberg said.

Just before the strike, Stoltenberg’s AP English seniors finished their major 5-10 page research paper for the year, she said. Stoltenberg took the stack of 57 essays to Sen. Rob Standridge’s door at the Capitol, hoping to convey the amount of work she does as an educator.

Stoltenberg told Standridge, “This will take me over a month to grade in addition to planning and grading all of the other things that I do.”

On an average day, Stoltenberg arrives at her classroom at 8 a.m., spends her lunch with students instead of taking a break and goes home at night to grade and plan. She has a side-job at Loft, a chain clothing store in Norman. She picks up shifts after school and on the weekends when she needs to.

“My wish would be for legislators to actually spend time in a classroom,” Stoltenberg said. “Not just talking to teachers, not just talking about their own experiences in school. But actually in those rooms, in those packed classrooms.”

Education junior Lexi Hurley knew she wanted to be a teacher before she even set foot on OU’s campus.

“I might be a little bit naive. But I think that, for the same reasons that a lot of people leave, (that's) the reason that I want to stay,” Hurley said.

Despite the challenges Oklahoma teachers face, Hurley hopes to teach elementary math when she graduates. She knew teaching was her dream career when she worked at a summer camp prior to her first semester at OU.

“I just kept thinking every day that I would be fine if I could do this for the rest of my life,” Hurley said. “It was just ... fulfilling.”

Hurley graduated in 2017 from Oklahoma City Public Schools, where she witnessed the hardships of being an educator, as well as the impact a good teacher can make on a student's life.

“I think people underestimate the amount of knowledge that teachers have in their field, and the ability that they have to make those positive impacts on students,” Hurley said.

Now as an OU student, Hurley learns from local teachers in her college classroom. Some of her professors are current teachers in Norman and Oklahoma City districts, and they don’t shy away from the financial realities of being an educator, Hurley said.

Part of the current curriculum for OU education students involves learning about digital equity — the idea of equal access for students to learn how to use digital technologies — and how to integrate technology into the classroom, said Theresa Cullen, associate professor of instructional psychology and technology, and John and Jane Kenney endowed faculty fellow.

One of Cullen’s roles is to teach education students about an online donation platform, DonorsChoose, a website which allows certified teachers to ask for donations from the public for classroom supplies like laptops and books.

“Teachers just end up paying for stuff for their classroom,” Cullen said. “So learning how to write a DonorsChoose (campaign) and learning the parts of a DonorsChoose (page) allows you to advocate for yourself.”

Cullen said she sees an optimism in her students that hasn’t faded since in the walkout.

While being a teacher in Oklahoma is a financial challenge, Koutahi and Hurley agreed they are committed to the profession for their future students more than anything else.

“We're all motivated by kids and their needs,” Koutahi said.

Hurley and Koutahi will both receive assistance with their student loans as OU education students, but they agreed it isn’t the driving factor in their decision to stay in Oklahoma to teach.

“Leaving the state doesn't completely solve the problem. I might get paid better in Texas, but still not get paid what a teacher is worth,” Hurley said. “And so it is scary, but I'm hoping that all this activism is going to result in positive change.”

Koutahi wants to teach in Oklahoma because there is a shortage here of world language teachers, she said. But she also feels an intense connection to the character of this state.

“I am an Oklahoman born and bred,” Koutahi said. “I think the spirit of Oklahoma is one of resilience.”

Abigail Hall contributed to this report.