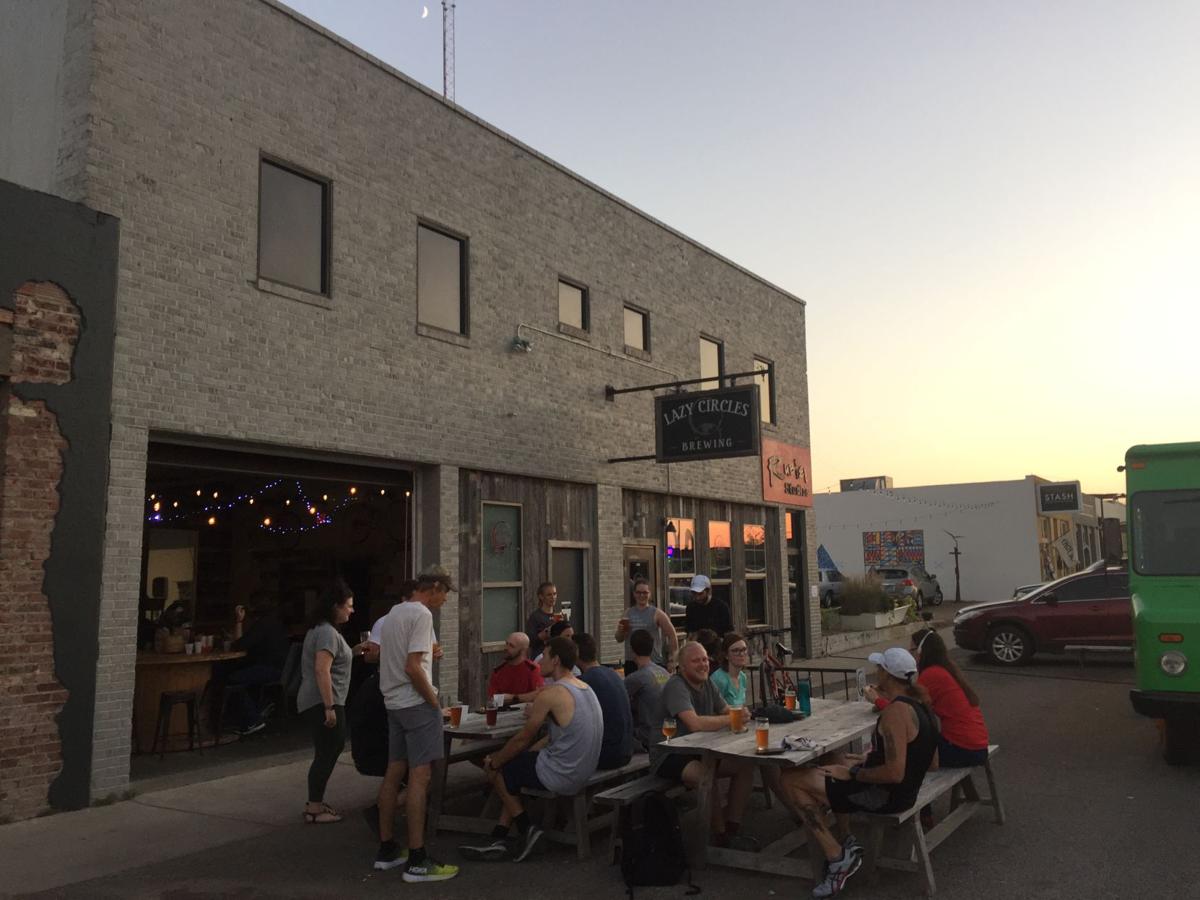 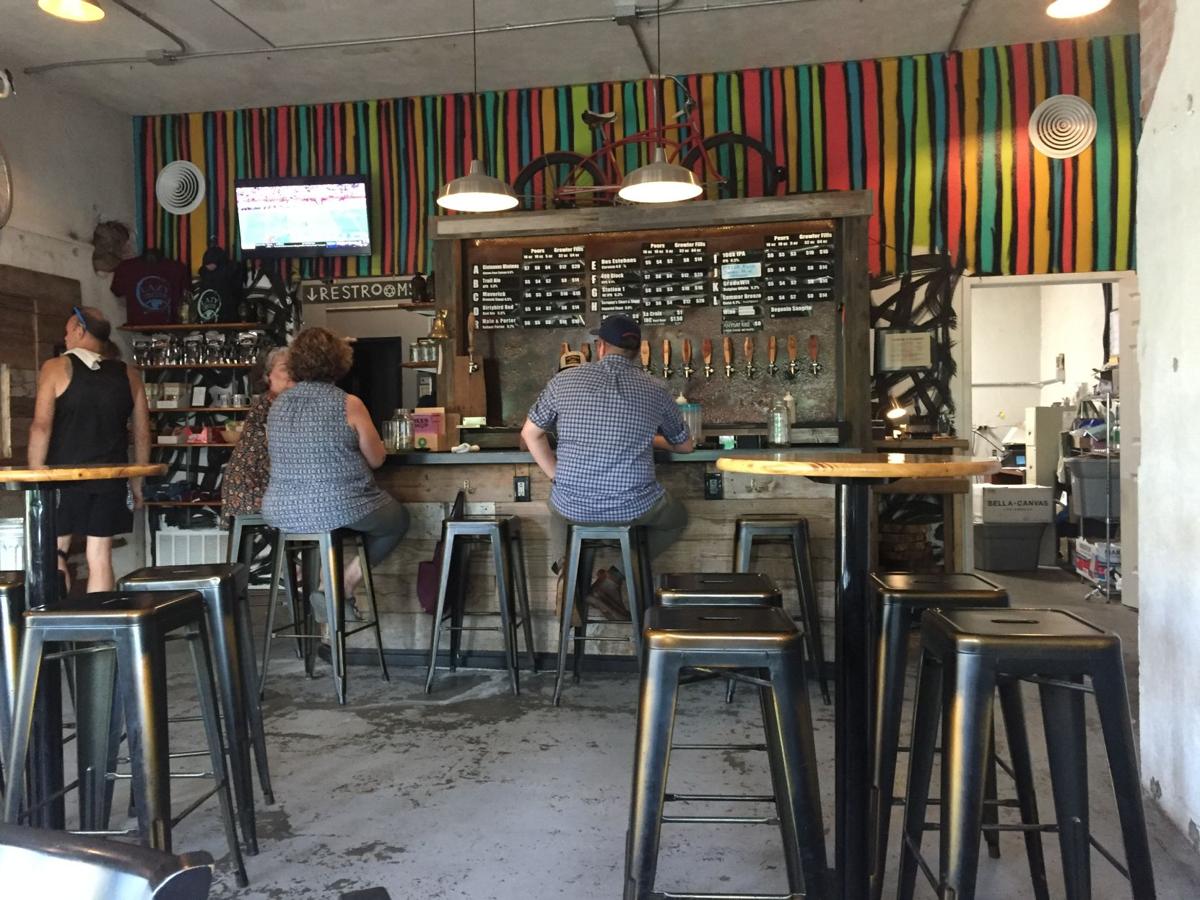 The building across the street from the Norman Fire Department was so small, it could barely fit a couple fire trucks. Now, the property welcomes its visitors with a timbered sign that reads Lazy Circles Brewing.

Even before customers walk in, they may wonder whose idea it was to make a craft beer business of this size in this part of the country.

“Let’s just say we didn’t sell any beer, and it was within the legal requirements set out by the ABLE commission,” said Stephen Swanson, Lazy Circles’ tap room manager, referring to the Oklahoma Alcoholic Beverage Laws Enforcement Commission.

Swanson is short-spoken until you touch upon topics close to his heart.

“Bicycles were a passion for me long before I drank beer,” Swanson said. “I’ve always found freedom and joy in riding a bike.”

Before bikes, there was cooking, Swanson said. After the college dropout’s first professional passion — becoming a famous chef — faded, Swanson went back to school.

“I figured I would get a business degree and get a job that could afford what I wanted to do: ride bikes, travel, drink good beer and have a comfortable life,” Swanson said. That job, he said, offered everything he wanted, so he dropped out of college again.

At the time, Swanson was single, but shortly after accepting a job at the bike shop, he met his future wife, Holly. Her brother, Stephen Basey, was retiring after 20 years in the U.S. Navy.

“The three of us decided it was a good time to build something for the future,” Swanson said. The rest of the family supported with money and otherwise.

Swanson said he comes from a large family “with lots of brothers (who) all drink craft beer.” He also said one of his brothers brewed beer before he “ever decided to try it out.”

The future brewery started in Basey’s garage, Swanson said. “At the time, he had a bigger house, a pool table and a pasta roller.”

People started asking whether they could buy some beer for their backyard gathering, their wedding up in Tulsa, someone’s graduation party and other events.

“We brewed together at home, for years before opening, starting off very small,” said Stephen Basey, head brewer at Lazy Circles Brewing. “Then we were cranking out quite a bit of beer. And we got good at it.”

“At first it was like, 'Hey, let’s brew 10 gallons of beer. You get a keg and I get a keg,'” Swanson said. “And so, we got to a point where we could consistently keep two kegs of beer on tap, 10 gallons at a time in our house. From there, it kind of snowballs.”

In November 2017, Basey and the Swansons thought, “Hey, maybe we can take this to market.”

At that time, there was only one brewery in Norman. It seemed like the perfect time.

The first brewery in Norman was 405 Brewing. Swanson knew its owners, Trae Carson and Jonathan Stapleton, long before they opened.

“We had a lot of help from Trae and Jonathan,” Swanson said. ”Actually, we get even more help from them now that we’re open.”

One of the great things about the craft beer industry, according to Swanson, is breweries helping each other out. He said Lazy Circles and 405 Brewing try to market their businesses together and offer different products to avoid direct competition.

“It’s a super friendly market,” Swanson said. “I could walk into any brewery in Norman or Oklahoma City and talk to somebody in their production facility, and they’d give me more information than I care to have. And then they’ll probably give me like two four-packs of beer. It’s just a really interesting industry.”

The timing was also perfect because a year before Lazy Circles Brewing opened, breweries around the state could only sell their beer to distributors. But as Oklahoma was becoming more craft beer-friendly, the legislature allowed for tap rooms to serve their own brew.

Swanson said he believes the fun of craft beer is in the experience of going to a tap room.

“It’s in occasionally meeting and talking to the owners, to the people who made the beer you drink,” Basey said as he looked around the wooden-paneled front room of the brewery.

“There is nothing more American than a small business. Dudes or gals, following their passion, just working and making something they’re really into. What’s better than that, right?”

Swanson and Basey recall how years back, in their garage, they would look at four chilling, fermenting kegs and ask each other, “All right, what are we brewing next?”

“It’s the same exact process now, except we are looking at probably 30 to 40 kegs,” Swanson said. “We probably need to get some kind of real business person involved to tell us how to actually do it.”

“It’s not that far off from where we started,” Basey said with a laugh. Neither of the two brothers-in-law would ever listen to any big business people telling them how to run their brewery.

They managed to render their lifestyle profitable.

“We’re not super unique in what we do,” Swanson and Basey said.

Anywhere you go, you can now find a small neighborhood brewery with darkling stouts, staple IPAs and daring sour ales. But the beauty of it is in finding different takes on the same beer in brewery after brewery, the brothers-in-law said.

More than 20 spirited individuals stretched outside the Lazy Circles’ inconspicuous two-story brick building at the eastern end of Norman’s Main Street. The rally appeared surprisingly energetic for 6:30 p.m. on a Thursday.

There were people of all stripes: college kids, oldsters, parents with children in jogging strollers.

They were united by the two hobbies shared among the crowd — running and drinking beer.

Kevin Kuruc, who joined the Thursday run, said he believes such events are "hugely helpful.”

Kuruc has recently moved to Norman from Austin to work as an assistant economics professor at OU.

"It’s much easier to start talking to people when you’re there for a common experience,” Kuruc said. “It’s a great catalyst to start a conversation.”

Currently, Lazy Circles Brewing consists of a laidback tap room that’s open every day and an actual brewery with tanks, mills and filters in the back. Additionally, the brewery hosts and endorses special events, including the Lazy Runners Brew Crew run — a joint initiative with OK Runner.

A 3-mile race starts and ends at the brewery, with every finisher receiving a complimentary beer.

“We got a bunch of people here who like to run and drink beer,” Swanson said.

The Lazy Circles brewers have not given up on their other passions as well, including biking.

“The idea was always to be a brewery that was heavily marketed toward cyclists, runners, people who kayak, go canoeing, hiking, camping — that sort of lifestyle we wanted to go after,” Swanson said. “Because that’s what we were into.”

On Wednesdays, the brewery collaborates with Fusion Fitness and Buchanan Bicycles for a “beer and bike ride.”

Such relationships between local businesses extend far beyond occasional cooperation. The Norman leisure scene, when explored more in-depth, presents itself with an all-embracing sense of reciprocity that reigns over the town.

The brewery owners said they are “real big into raising money for certain charities.” They contributed to Food and Shelter as well as Bethesda, a Norman-based charity that provides care for those with childhood sexual abuse trauma.

Eventually, Norman begins to resemble a single organism, where each building and business is an integral part of the whole.

“There is certain expectation for small business to be community-oriented,” Swanson said.

However, he said at Lazy Circles they also believe in business serving a purpose beyond making money.

“People ... support small business when they feel like that business is doing something more than just taking in profit.”

Swanson said he thinks giving back to the community by helping local charities and investing in hobbies, such as sports or beer drinking, is the way to raise the overall quality of social and communal life.