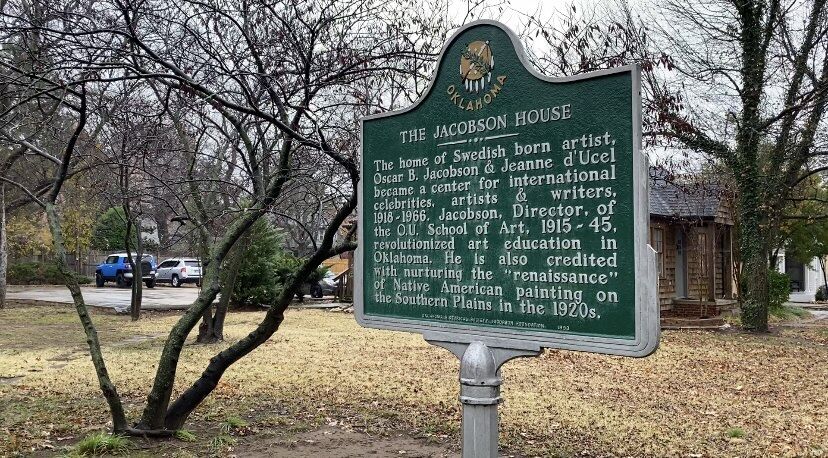 A plaque commemorating the namesake of the Jacobson House outside of the center Dec. 14. The Jacobson House, located at 609 Chautauqua Ave., was the home of Oscar Jacobson, former director of the OU School of Art. 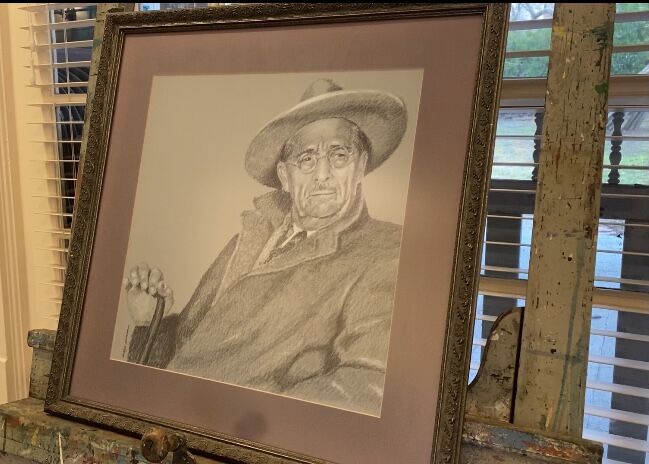 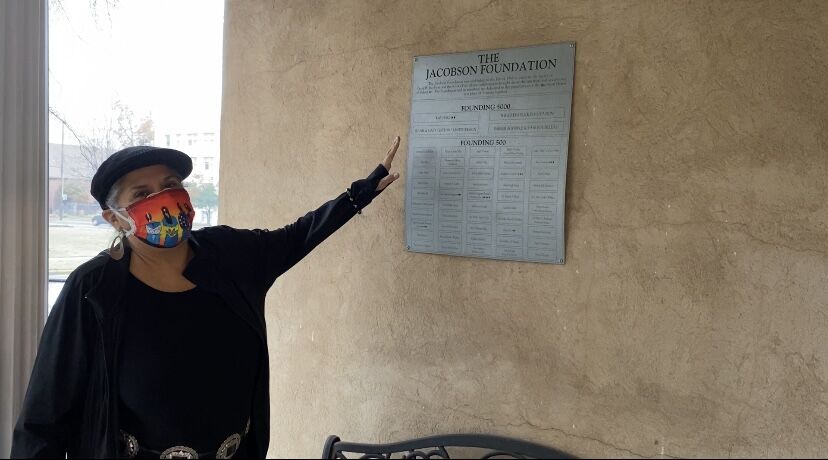 As rain dripped from the eaves of the roof, a cold wind passed through the doors of the empty Jacobson House Native Art Center. The floorboards of the house groaned under the weight of even, careful feet, and with each creak, Tracey Satepauhoodle-Mikkanen was reminded of the dire situation below.

The board members of the nonprofit art center — a museum that focuses on preserving the history of Native art — have been struggling to fund the structural repairs the museum has needed for years. Museum chair Satepauhoodle-Mikkanen, who is Kiowa and Caddo, said she hopes the new OU administration led by president Joseph Harroz will be the change the center needs.

“This president has fixed our roof,” Satepauhoodle-Mikkanen said. “During this year of uncertainty and chaos … this is very promising and fills me with hope, so I thank him.”

But OU professor Joshua Nelson, who is a citizen of the Cherokee nation and serves on the executive board for the center, said the weakening of the basement has put the center on the verge of collapse.

“Basements in Oklahoma aren't always a fantastic idea,” Nelson said. “Jacobson House has one, and it's feeling its age.”

Satepauhoodle-Mikkanen said the board members have been instrumental in keeping the center afloat through hard work and fundraising efforts. She said she hopes others will begin to appreciate Native art and what the Jacobson House has to offer.

“I stand here, but there are so many people behind me. This house has so much history,” Satepauhoodle-Mikkanen said. “It is such an inspiration to me that art has the ability to pull worlds together.”

With the threat of the unstable basement looming, Satepauhoodle-Mikkanen and the other leaders of the center said they fear for the future of the museum. Jacobson House Executive Board member Eric Singleton curates the National Cowboy and Western Heritage Museum. He said the bridge between Native and other cultures will be at stake if the center is not saved.

“OU has a very unique role in the history of Native American art ... and the Jacobson (House) is part of that history,” Singleton said. “It gives you something that cannot be found anywhere else in the world.”

The museum's namesake, Oscar Jacobson, was a Swedish artist who served as the director of the OU School of Art and curated the Fred Jones Jr. Museum of Art. After moving to the United States from Sweden, Jacobson spent his time at OU supporting Native artists, and Satepauhoodle-Mikkanen said she hopes the center will continue to be a place of cultural appreciation and understanding.

“We have been here for over 30 years ... protecting and upholding what it means to be a good steward to the art and its history,” Satepauhoodle-Mikkanen said.

During his time at the university, Jacobson lived in his namesake center and worked to create a safe space for Native talent. Satepauhoodle-Mikkanen said she admires Jacobson for his ability to respect the line between promoting and appropriating Native culture.

In honor of Jacobson, Satepauhoodle-Mikkanen said she hopes to make the Jacobson House a safe space for Native students to feel connected to their culture and share that culture with others.

“I've had students come here that were just like, ‘I don't know anybody. I'm straight from (the reservation),’” Satepauhoodle-Mikkanen said. “And then they come here and they're very humbled by that feeling of home.”

Satepauhoodle-Mikkanen said Jacobson created an art program at the university that birthed the renowned art group known as the Kiowa Six. The group garnered worldwide praise and brought attention and appreciation to Native art.

The group was originally known as the Kiowa Five, but Satepauhoodle-Mikkanen said the sixth member —  and sole woman — Lois Smoky was later recognized for her historic defiance of gender norms within the Kiowa community.

During Smoky’s career in the early 20th century, Satepauhoodle-Mikkanen said Kiowa women were often discouraged from taking part in things that were “men’s work.” Kiowa women did not play the drums or flute during celebrations, because they were seen as “advanced instruments.”

Satepauhoodle-Mikkanen said Smoky began to break down those barriers by picking up a paintbrush and becoming an artist.

“(Smoky) came here in a day and age when Kiowa women most certainly didn't do the things that she was doing,” Satepauhoodle-Mikkanen said.

Satepauhoodle-Mikkanen said she’s dedicated her life to uplifting Native art and culture — specifically female artists. She co-owns and operates the Main Street Event Center with her husband Arvo Mikkanen, and often spotlights Native painters and promotes women DJs at the venue. She said her passion for the Jacobson House and the event center stems from her pride in her culture.

“I want these family descendants to see that I’m holding their arm. I’m holding my tribe,” Satepauhoodle-Mikkanen said. “And I want the University of Oklahoma to be proud.”

Note: This story was updated at 6:18 p.m. Dec. 17 to correct that Satepauhoodle- Mikkanen is Kiowa and Caddo.