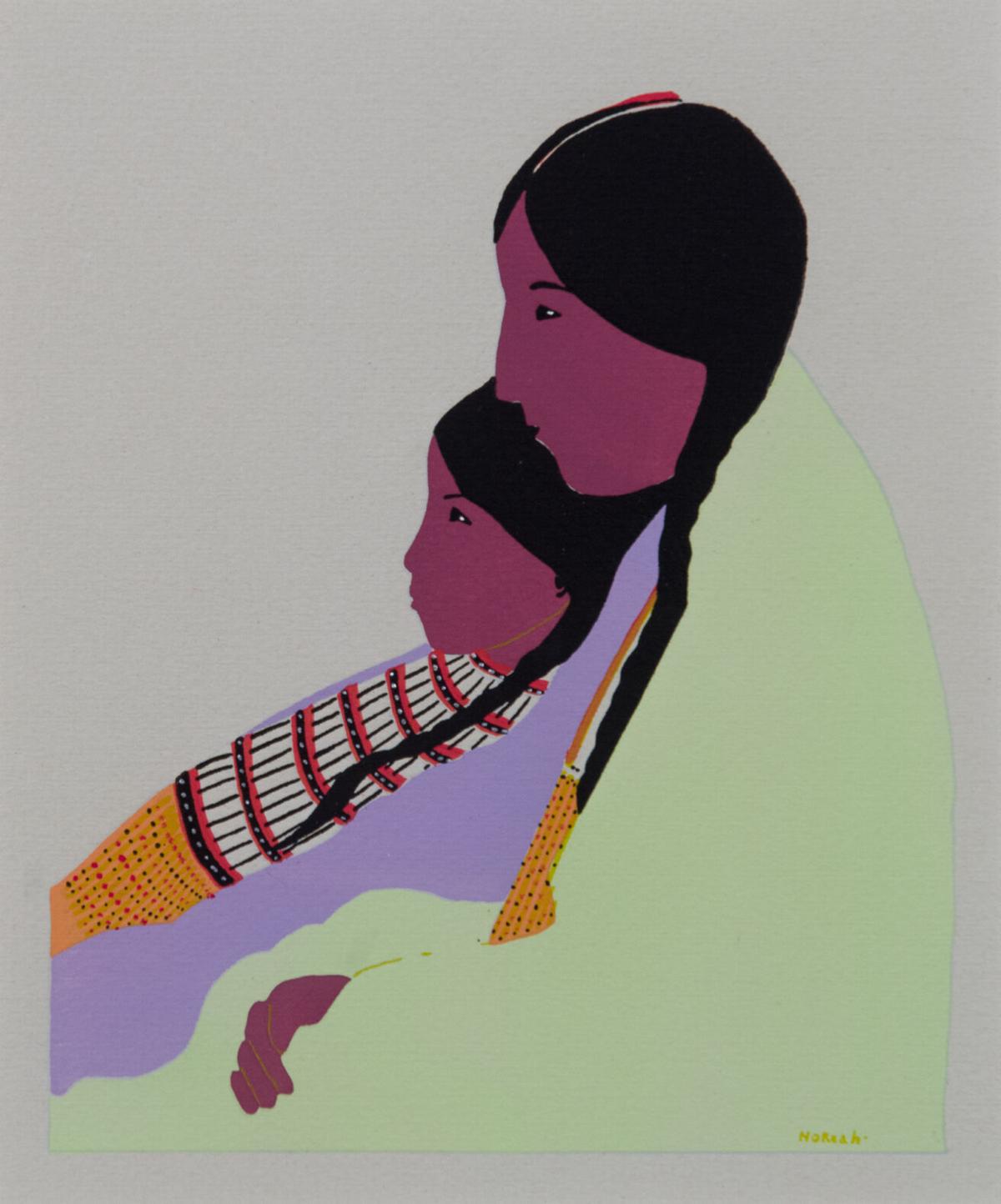 Jack Hokeah's "Mère Kiowa et son Enfant" will be featured in the museum's "Kiowa Agency: Stories of the Six" exhibit. 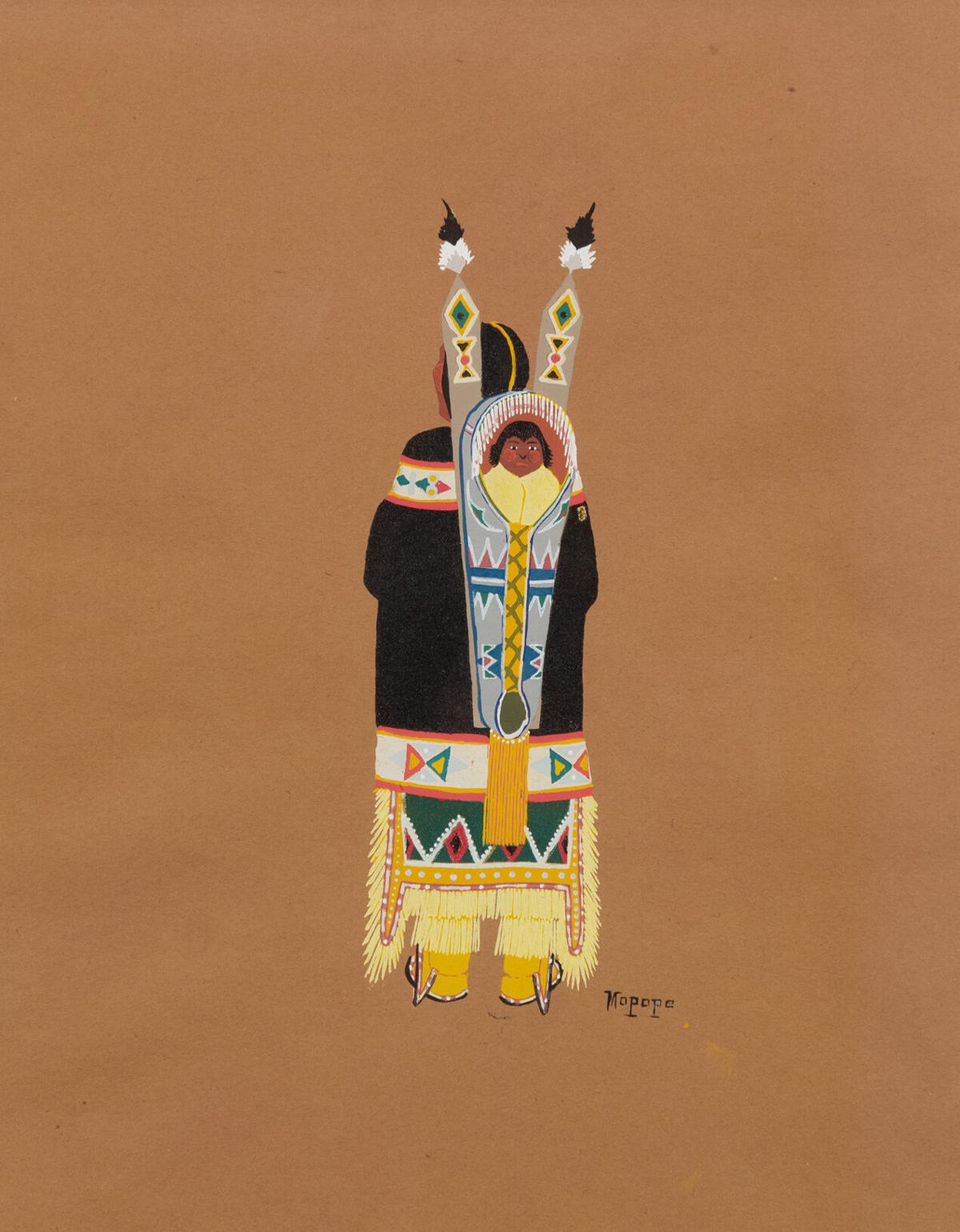 Stephen Mopope's "Mother and Child" will be featured in the "Kiowa Agency: Stories of the Six" exhibit at the Fred Jones.

The Fred Jones Jr. Museum of Art is currently home to the exhibit “Kiowa Agency: Stories of the Six,” which tells the story of six indigenous Kiowa artists who attended OU in the late 1920s and early 1930s.

The works of art included in the exhibit —  which were previously found in OU’s Western History Collections, the Fred Jones and the National Cowboy and Western Heritage Museum’s Silberman Collection — are simple, colorful and flat drawings that often feature single figures of dancers. The exhibit features brief biographies for each of the six featured artists on walls that are a solid color pulled from their pieces.

Between 1927-1929, six Kiowa artists — Spencer Asah, James Auchiah, Jack Hokeah, Stephen Mopope, Lois Smoky and Monroe Tsatoke — attended OU’s School of Art, according to the museum’s website. Student curator Olivia von Gries said they would later be known as the Kiowa Five and eventually the Kiowa Six after it was decided that the Lois Smoky should also be included.

“They weren't all here at the same time,” von Gries said. “There were four of them here to begin with and then they kind of switched places. So they're really an informal artists group. They weren't known as the Kiowa Six when they were here; this is kind of a term we've applied later to them.”

Rushing designed this year’s class along with former Fred Jones director Mark White and selected the Kiowa Six as the subject of this year’s seminar. The graduate students enrolled in the spring semester were Mariah Ashbacher, Julia Harth and von Gries.

The three students spent the spring 2020 semester researching and planning for the exhibit, which is curated by associate curator Hadley Jerman and director of communications Kaylee Kain, along with the help of many others.

Oscar Jacobson was the director of the School of Art at the time when the Kiowa Six studied at OU, according to the museum’s website. Von Gries said the story has often been told that Jacobson is to credit for their success. However, the six artists created work before and after their time at OU, serving as agents of cultural transmission, said von Gries.

In order to give the Kiowa Six the credit for their contributions that had often been given to others, the curators found it important to present the story of these artists in a new way.

“It was really important to us to present the information in a new light with a 21st century perspective,” Ashbacher said. “So we settled on the theme of agency.”

“Agency” in the title of the exhibit holds two definitions, said von Gries. One refers to the governmental Kiowa Agency located in Anadarko where the Kiowa Six grew up.

The second definition refers to “the capacity of individuals to act independently and make free choices,” according to the museum’s website.

“The United States government had a post in Anadarko, and they limited the agency of the Kiowa peoples by imposing these assimilative policies on them,” von Gries said.

Harth said the double meaning of “agency” became the inspiration for the exhibit’s theme, showcasing how the artists were impacted by their governmental agency yet still exercised personal agency.

“Because of the tensions in that relationship and how we thought the Kiowa artists exerted such strong agency in their artistic practice and in their communities, we thought that made a really beautiful, thematic way of unifying their artwork,” Harth said.

These three student curators were inspired by Stephen Mopope’s logo for the governmental Kiowa Agency, which can be found on display at the exhibition. Harth said they then decided on agency as the theme for their show.

Von Gries said since the graduate students were telling the story of six Kiowa artists, it was important to have representation and inclusion of Native American and Kiowa voices in the process. Listening to recordings of the artists was one of the ways the student curators were able to do this.

“A lot of that primary research was just sitting and listening to tapes of the artists speaking, interviews from the artists,” Harth said. “I tried just, in the best way I could … to stay out of it … and just communicate what I heard, particularly the artist James Auchiah, who's one of the ones I've researched, what he said. That to me was such an important way of representing … his artistic perspective and personal experience.”

Rushing said OU’s former Tribal Liaison Officer Warren Queton was also included as a reference as he is a citizen of the Kiowa Tribe of Oklahoma.

“We were really grateful for his help in terms of … not just sharing, but involving community members in a story that’s really important, not just to the Kiowa community but also the Oklahoma community,” Harth said. “This is something that’s a huge part of the history in Norman, a huge part of history at OU. I think it’s really important that all of the people who were involved in that story feel included and feel represented.”

The exhibit was originally scheduled to open at the Fred Jones over the summer but was delayed until Oct. 1 due to COVID-19. It will remain open until Jan. 17. Ashbacher, Hart and von Gries will host a virtual gallery talk at 7 p.m. Nov. 17.

The goal of the exhibit aims to change the narrative that people such as Jacobson were responsible for the success of the Kiowa Six and to instead give the artists proper credit, said von Gries.

“It’s very much modern art, even though we classify it as Native American art and we put it in this little bubble,” Ashbacher said. “It still belongs in the overall canon of art because it’s minimalistic. It was experimenting with these colors and this printing style that they had in France and these very modern things that were common for the times.”