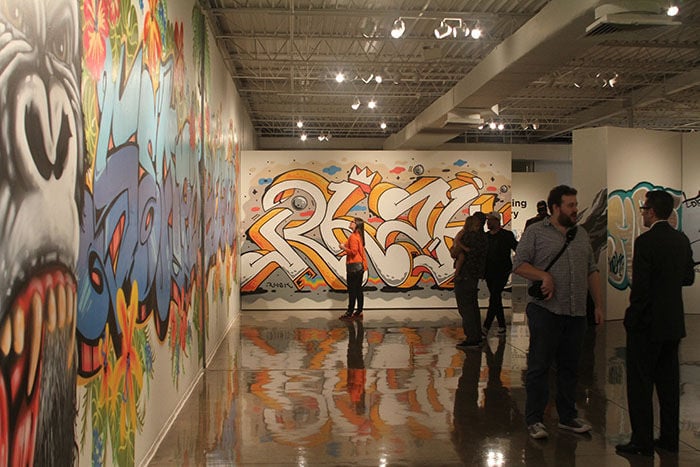 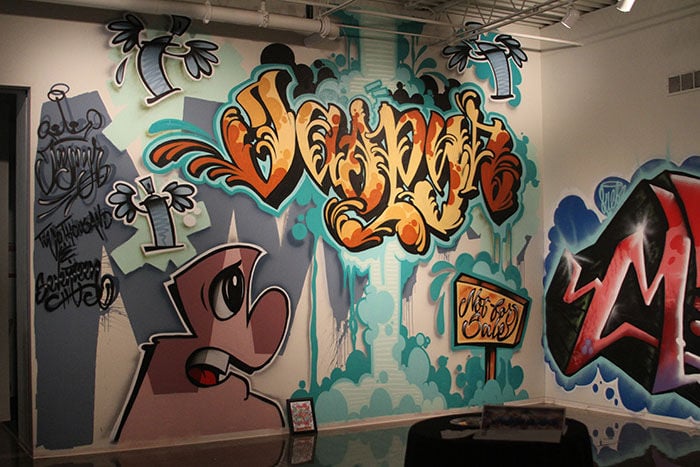 The Oklahoma Contemporary Arts Center filled with the fumes of paint and whispers of spray cans on Saturday morning as eight artists were hard at work painting. The museum wasn’t filled with portraits or sculptures but rather with graffiti, which covered the blank walls.

Little said that he and other guest curator Chris SKER were inspired to create "Not For Sale" after realizing the lack of locations where you can find graffiti art.

“The graffiti artists I’ve known, the graffiti I’ve done myself in the past — one of the big things about it is it’s not something you normally see in a gallery. You don’t see it showcased,” Little said.

The artists filled their wall space by reaching high corners with ladders and carefully detailing outlines of their work with light strokes. Within an hour, black outlines were filled with vibrant colors.

GERM, who came into the project with a draft he prepared two days before, said he “works better under pressure.”

“I just wanted something bright and vibrant. I know pink is not really a masculine color, but I like pink. It’s a bright color, and it’s pretty bold — just so my colors would pop more,” GERM said.

Other artists, like JASPYR, took the image in mind and decided to freestyle the whole piece.

“It’s all freestyle. I didn’t know what wall space I would have, so I couldn’t really get an idea of what to do. So it's kind of coming off the top of my head,” JASPYR said.

Artist SADAT said he wished to include his Native American heritage in his piece of work as he freestyled it.

“I’m Native American. My tribe is Pawnee, and traditionally we understand ourselves as star people, so that’s the reason for these plus signs — that’s how we’re represented in a lot of our traditional artwork,” he said.

SADAT said he enjoys the free movement he gets while painting, which allows him to progress as he freestyles his piece.

“When I paint, I like to move. When you paint a wall, being able to climb up and down, certain motions, flowing motions — that’s how all of this came together,” he said.

The artists took time in between each spray to look back at their work-in-progress from a distance and then walk back up to begin working in a different section.

Each artist was self-taught. “Maybe now you can go to school for graffiti, but back then there was nothing like that. Graffiti, for me, is self-taught,” SKER said.

The title of the exhibit, "Not For Sale," was inspired by co-curator SKER to emphasize that none of the work in the show will be available for sale.

“Even for the show itself, you cannot buy this work at all. You can buy prints of it, you can get T-shirts made of it, all of that, but you can’t buy anything on the wall — mainly because we’re graffiti artists, (and) that’s how it is. We do our work because we love it,” Little said.

Although the idea of graffiti has evolved over the years, it still receives a negative spotlight. The artists hope this exhibit will help change that.

“It’s always called a crime or vandalism, you know — that’s the first aspect of it,” GERM said. “It’s not just something you see on a dumpster or a wall. It’s actually art,” he said.

SKER disagrees that the negative perception of graffiti is an issue, saying we are “past that point.”

“We’re well past the phase where people should be thinking that graffiti is anything less than a full-fledged, dynamic-engagement, progressive art movement. In my opinion, it’s the strongest art movement that has come out of America in the last 100 years,” SKER said.

“I hope they take away an experience. Something you can walk through and follow with your mind,” SADAT said. “I hope it sparks some intrigue — some wonder.”